The Royal Canadian Mint have launched a new series comprising four coins in total which feature the folklore of the First Nations about the constellations in the heavens. The story below is the compelling First Nations legend that explains the origins of the Big Dipper, one of the most recognized formations in the night sky.

“That bear is killing all the animals and our people will starve. We must stop it,” the elders said. Three great hunters set out in pursuit of the great bear. They tracked it for many moons, across the earth and up into the sky”

The seven stars that make up the Big Dipper are arguably one of the most recognized formations in the night sky. They are visible year-round from northern latitudes, and have inspired countless legends around the globe. Many First Nations legends describe the Big Dipper as a great bear who is hunted ceaselessly by three hunters. The first issue in this four-coin series shows the hunters answering the elders’ call to stop the bear before it kills all the animals in the forest and brings starvation to the people. 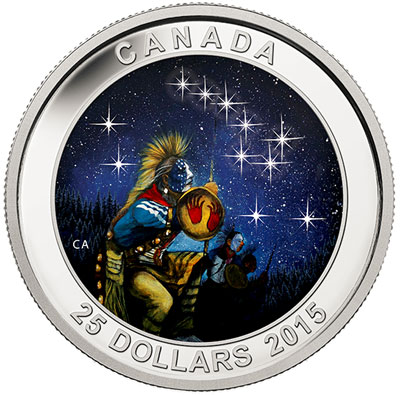 The reverse of the coin is designed by Western Ojibwa artist Cyril Assiniboine who has created a stunning image of hunters as they head out to track the bear under a star-filled sky. The design showcases the hunters’ impressive traditional Saulteaux dress, complete with imposing face paint and ceremonial shield with highly symbolic bear claw motif. In the background, the Big Dipper glows in the dark; a foreboding sign of the eternal hunt that is to come. The obverse of the coin includes the current effigy of HM Queen Elizabeth II used exclusively on Canadian circulation and commemorative coinage since 2003. 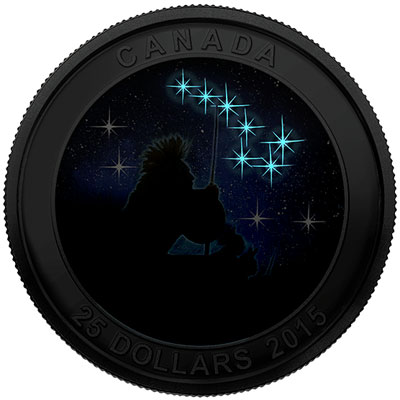 The first coin in the series is entitled “The Quest” and is available by subscription only. The second coin, “Wounded Bear” coin ships in November, 2014, the 3rd coin, “Great Ascent” coin ships in February, 2015 and the last coin, “Eternal Pursuit” will ship in April 2015. All coins carry the year “2015” on the reverse. All four presentation boxes in the series when viewed in the dark make up the big dipper.