Stack’s Bowers Galleries is scheduled to auction a 1793 Wreath Large Cent, Sheldon-9, graded MS-69 BN by PCGS and NGC. Tracing its pedigree to the Virgil M. Brand, Dr. William H. Sheldon, and other famous collections, this coin represents the single-highest graded 18th century United States coin of any date, variety, or denomination. This extraordinary piece will be included in the New York Americana Sale held from January 22-25, 2013.

Following the Mint Act of April 2, 1792, the Philadelphia Mint was put into operation that September. Patterns were coined, followed in March 1793 with the first copper cents, featuring the Liberty Cap obverse motif with first of the Chain Reverse type, then the Wreath Reverse style. The Wreath cents were struck from dies cut in high relief — not equaled earlier or later in the series. 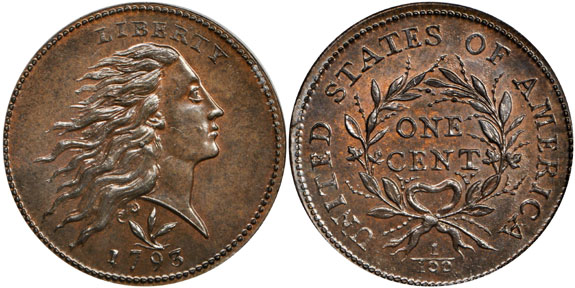 “The coin has been both expertly produced and carefully preserved, and to study the surfaces is to study a portrait of numismatic perfection in a product of the early United States Mint. Both sides are as fully struck as one could realistically expect in a Wreath cent with intricate, razor sharp definition to both Liberty’s hair tresses on the obverse and the leaves, sprigs and trefoils in the reverse wreath. A glossy satin to semi-reflective texture to the surfaces mingles with dominant light sandy brown patina, although we also note remnants of original, faded orange red color in the protected areas around some of the devices, especially on the reverse along the upper left wreath. The aforementioned semi-reflective qualities are best observed when the coin is held at direct angles to a good light source. As one would expect at the MS-69 grade level, both sides are virtually perfect with hardly even a trivial abrasion in evidence, and certainly no detracting carbon or other spotting. The surfaces are overall smooth, in fact, and only after close, careful scrutiny are we able to offer up a short, dull mark at the border outside the letter D in UNITED as a pedigree marker. A peerless large cent and a monumental example of the one-year Wreath type, this impressive Superb Gem is destined for inclusion in another world-renowned cabinet.”

This is one of two landmark 1793 cents to be offered as part of The Cardinal Collection in the Americana Sale. The other is a Gem MS-65 1793 S-2 Chain AMERICA copper. The collection formed by Martin Logies is part of a cabinet containing many choice and gem large copper cents gathered over a period of years.

In addition to The Cardinal Collection, the Americana Sale will feature American classics and rarities from other series. The auction will be spread over three days, and will include several thousand lots. Printed catalogs are available upon request by calling 800.458.4646. Online bidding and pre-auction bids will begin in December on StacksBowers.com, by email at and by phone at 800.458.4646.