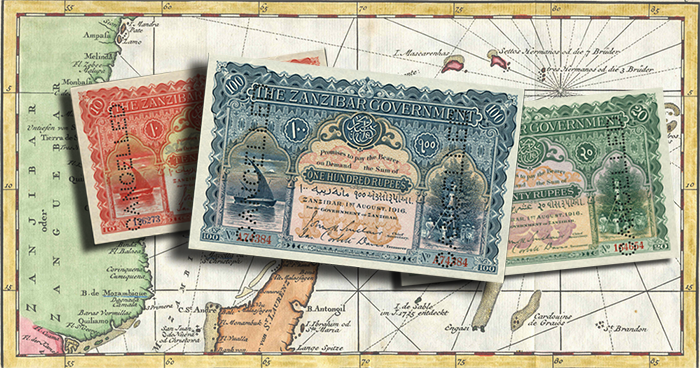 Stack’s Bowers Galleries, in conjunction with Spink London and Trusted Traditions, is pleased to announce that it has brokered a record-setting private treaty sale of a complete Waterlow and Sons set of bank notes from Zanzibar at an undisclosed price.

Zanzibar, a tiny island off the east coast of Africa, is a semi-autonomous region belonging to Tanzania and today has a population of less than one million people. Its history can be traced back over 20,000 years, but it was the British Protectorate of 1890 that brings this small region world-bank-note fame. In 1908, Zanzibar began printing its own money via Waterlow and Sons. Initially, the denominations released were 5, 10, 20, 50, and 100 rupees. Later in 1920, Waterlow and Sons also printed a 500-rupee note. The 500-rupee note, which is included in this deal, is one of the most difficult bank notes in the world to obtain.

In 2015, a six-note set of these pieces, certified by PCGS Currency, sold in a private treaty for an undisclosed amount. Then, in January 2017, Stack’s Bowers Galleries sold a 5-rupee note for $129,250 in their official NYINC Auction. Based on this extremely strong price and the number of interested bidders, it was evident that there was tremendous collector interest in these extremely rare notes from Zanzibar.

At that January 2017 show, Aris Maragoudakis, responsible for the World Paper Money Division at Stack’s Bowers Galleries, recalled that Barnaby Faull at Spink had represented the buyer of the six-note set sold years earlier via private treaty. He also noted that John Markis of Trusted Traditions had represented one of the under-bidders on the 5-rupee note from Stack’s Bowers Galleries auction. Maragoudakis then worked with both Faull and Markis to complete this historic transaction.

Mr. Maragoudakis said, “In general, deals of this magnitude are not common in paper money collecting, but in World Paper specifically, they are unheard of. These treasures are among the most special notes I have ever seen or handled, and it has been a privilege to work with Barnaby and John to make this deal happen.”

Stack’s Bowers Galleries’ president Brian Kendrella commented, “This transaction is the latest representation of the value brought to our clients through our experts’ in-depth collector relationships and knowledge of the market.  We are honored to have worked with Spink and Trusted Traditions on this landmark transaction of truly special bank notes.”

Barnaby Faull of Spink, added, “I have been in the business over 40 years and I reckon every year we may see a few ‘specials’, once a year a ‘treasure,’ and once every five years an ‘unbelievable find.’ The Zanzibar set ranks right up there as a once-in-a-lifetime find. It is rare you find notes that encompass all fields but Zanzibar ticks all the right boxes: British Commonwealth, Africa and of course the Gulf, which may be the hottest market in world notes right now. It is rare to see a note I have not seen before but a Zanzibar 500-rupee is something wonderful and I am delighted the set has found a good home where they will be truly appreciated. It has been an amazing experience dealing with the set and it is good to see inter-company cooperation at this level. Bank notes truly do cross borders!”

John Markis of Trusted Traditions added, “This sale is a lifetime thrill that will not wear off for the buyer or me for a very long time. My area of expertise is finding the holy grails of bank notes for my clients so that they can fill gaps in their collections. Over my 30-year career, this deal ranks at the top.”

The name of the seller, buyer, and the actual price of the sale will remain confidential.

Topping off this amazing numismatic history is the inclusion of the world record for the highest price ever realized at auction for a rare coin, the 1794 Flowing Hair Silver Dollar graded Specimen-66 (PCGS) that realized over $10 million, part of their sale of the famed Cardinal Collection. The company is headquartered in Santa Ana, California, with offices in New York, Wolfeboro, Hong Kong, and Paris. Stack’s Bowers Galleries is an Official Auctioneer for several important numismatic conventions, including American Numismatic Association events, the New York International Numismatic Convention, the Whitman Coin & Collectibles Spring, Summer and Winter Expos, and its April and August Hong Kong Auctions.