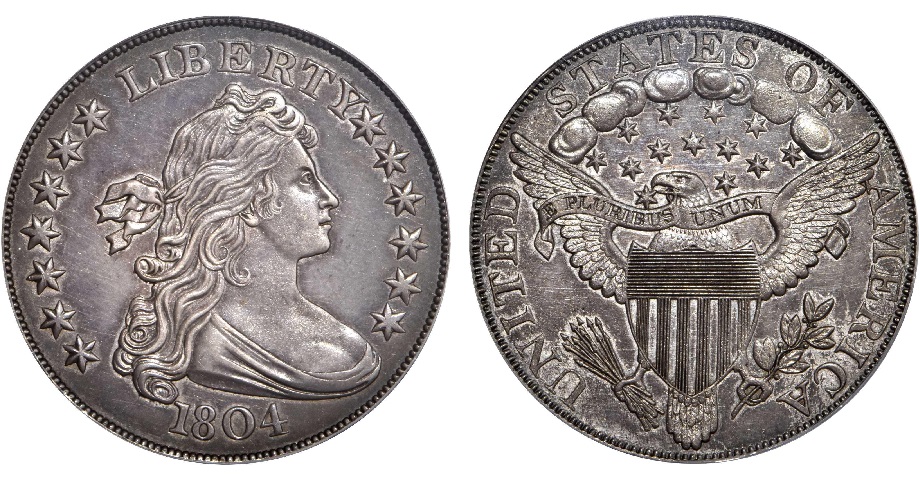 Costa Mesa, CA (December 28, 2020) — Eight of the top 10 highest auction prices realized for U.S. coins in 2020 were achieved by Stack’s Bowers Galleries, emphasizing their role as a leading resource for world-class numismatic rarities. Among these eight exceptional results are six coins that surpassed $1 million, including two distinct examples of the famous 1804 Draped Bust dollar.

“We are thrilled to have achieved eight of the top 10 prices realized during this challenging year, an accomplishment that reflects our industry-leading innovation and expertise,” said Stack’s Bowers Galleries President Brian Kendrella. “What is most remarkable,” he explained “is that each of these coins are old friends that we had sold previously over our firm’s 85-year history. We are proud to be the consistent choice for auctioning top-tier rarities, and it has been a privilege to present these pieces to a new generation of collectors in 2020.”

The highest price realized this year was earned by the Proof-65 (PCGS) 1804 Class I Original Draped Bust dollar that sold for $3,360,000, setting a new record for this grade level. This coin was acquired directly from the U.S. Mint in 1843 by collector Matthew Stickney and was presented in the Larry H. Miller Collection, Part Two by Stack’s Bowers Galleries in their December 2020 sale. The firm previously sold this coin in their April 1997 sale of the legendary Eliasberg Collection for $1,815,000; that was its last public auction appearance.

Earning the third-highest price of the year at $1,920,000 was the 1854-S half eagle featured in the D. Brent Pogue Collection, Part VII. Previously included in the Eliasberg Collection, this AU-58+ (PCGS) half eagle is the finest known of the three confirmed to still exist.

Fifth place on this list is shared by two coins that each realized $1,440,000 in Stack’s Bowers Galleries sales. The first of these coins was the Proof-55 (PCGS) Class III Restrike 1804 dollar offered in the March sale of the Pogue Collection, Part VII. It was previously sold in the firm’s 1980 sale of the Garrett Collection and before that had been held by the Garrett Family from 1883 to 1942 before being bequeathed to the Johns Hopkins University. A Proof-65 (NGC) CAC 1894-S Barber dime realized $1,440,000 in Part Two of the Larry H. Miller Collection, setting a new record for the grade. This dime, also once part of the Eliasberg Collection, was recognized by the founder of CAC, John Albanese, as his “favorite” of the nine known.

A Proof-64 (PCGS) 1885 Trade dollar from the E. Horatio Morgan Collection took seventh place when it crossed the auction block at $1,320,000. It is the second finest of five known and was first handled by Stack’s Bowers Galleries in their 1965 Sale of the Ewalt Collection.

Ranking at number eight is a historic MS-62 (NGC) 1794 Flowing Hair dollar that realized $1,050,000 as part of the Miller Collection, Part Two. Stack’s Bowers Galleries traded it privately several times before it appeared in their 1976 Willing Collection sale. Most notably, it is the only coin among the top 10 prices realized of 2020 that was struck for circulation by the Philadelphia Mint.

Ninth place in the 2020 rankings is occupied by the magnificent Miller Collection 1849 Mormon $10 graded AU-53 (PCGS) CAC that sold for  $840,000, setting a new all-time record for the issue. Pedigreed to the famous collection of Col. E.H.R. Green, Stack’s Bowers Galleries previously offered it in their January 1984 sale of the Amon G. Carter, Jr. Family Collection, where it sold for $132,000.

Closing this list at number 10 was the incredible MS-67 DMPL (PCGS) CAC 1886-O Morgan dollar that brought $780,000 in Part One of the Larry H. Miller Collection. It was called “the most spectacular Morgan dollar known” by specialist Wayne Miller and ranks as the sole finest example graded by PCGS.

In addition to these top eight results, Stack’s Bowers Galleries also auctioned 10 of the top 15 and 16 of the top 25 highest priced coins of the year, indicating their ability to attract superior prices across a wide range of numismatic material. The firm is now preparing for its 2021 auction season and their March Auction already promises to be an impressive event. Stack’s Bowers Galleries is inviting consignments of U.S. coins and paper money for this sale until January 25. If you would like to consign your collection to the March 2021 event or have questions about the consignment process, contact Stack’s Bowers Galleries today at or by telephone at 800-458-4646.

Topping off this amazing numismatic history is the inclusion of the world record for the highest price ever realized at auction for a rare coin, the 1794 Flowing Hair silver dollar graded Specimen-66 (PCGS) that realized over $10 million, part of their sale of the famed Cardinal Collection. The company is headquartered in Santa Ana, California, with offices in New York, Tulsa, Wolfeboro, Hong Kong, and Paris. Stack’s Bowers Galleries is an Official Auctioneer for several important numismatic conventions, including American Numismatic Association events, the New York International Numismatic Convention, the Whitman Coin & Collectibles Spring, Summer, and Winter Expos, and its April and August Hong Kong Auctions.