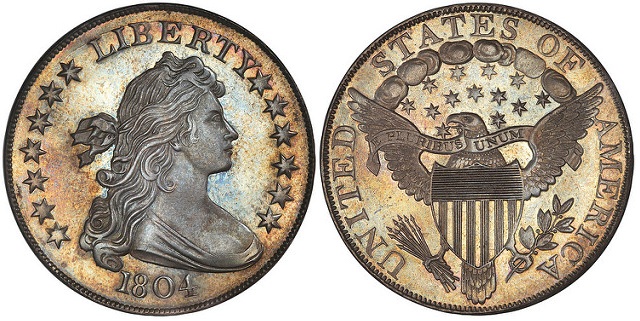 Stack’s Bowers Galleries has provided information on the fourth installment of the blockbuster sale of the D. Brent Pogue collection, held in cooperation with Sotheby’s and scheduled to take place on May 25 in New York City.

Some highlights of the auction will include the finest-known 1804 silver dollar and a prized 1822 half eagle. Both coins can be traced back to the Virgil M. Brand Collection, but have never appeared at auction simultaneously. The former coin, known as the Sultan of Muscat-Childs-Pogue 1804 silver dollar, has been graded Proof-68 by PCGS, and is considered to be one of the five most valuable coins in the world. The 1804 dollar is pictured above, courtesy of Stack’s Bowers.

A third installment of the D. Brent Pogue Collection brought in $17,135,612.50 at auction last month, bringing the current total realized by sales of the collection to $68,577,182, more than any other single collection in history.

A brief overview of the collection, released by Forbes and shared here previously, is posted below for those who haven’t seen it.