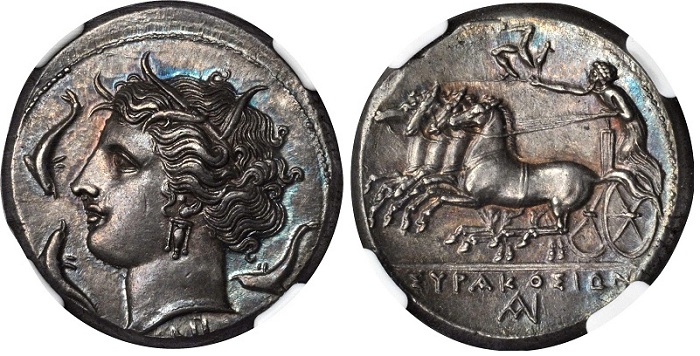 High quality and good eye appeal ruled the day for the kickoff section: Ancient coinage. Lot 20041 a glorious Syracuse Tetradrachm from the time of Agathocles drew bids from seven sources, finally selling at $14,100, more than doubling its high estimate. The Roman coins saw strong results for choice gold Aureii of the Imperial era. Lot 20160, an Aureus of Antoninus Pius graded Ch MS by NGC, garnered $11,162. Only six lots later a very rare example of a family Aureus of Septemius Severus brought $23,500. A march of three Aureii of emperors Gordian III, Aurelian and Galerius respectively hammered at increasing values of $7,050, $11,750 and $21,150.

The second half of Session A contained world coins and large gold coins from 1930s Czechoslovakia continued to perform very well, with lot 20353 nearly tripling its high estimate at $29,375. Lot 20354 reached well over its high estimate with a hammer price of $56,400. Throughout the session there were areas of strong bidding with coins from El Salvador and high grade Medieval European gold showing solid results. The German section, always a broad and popular area, reached its pinnacle with lot 20502, a 1689 Hamburg Portugaloser struck to the weight of 10 Ducats, which bidders drove to a final hammer price of $39,950. 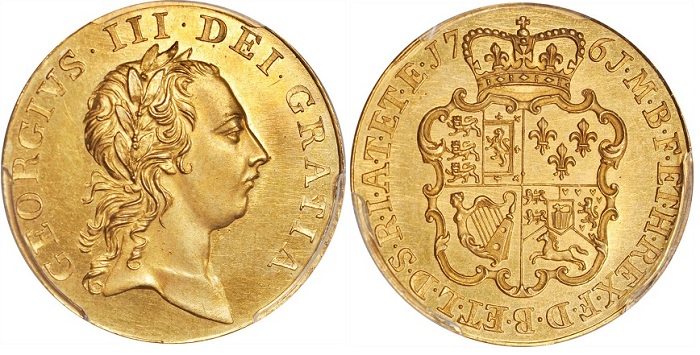 On Friday, Session B continued the offering of world coins beginning with those of Greece. Lot 21121 was a 1914-R Italian 5 Lire in the choice grade of PCGS MS-63 and exceeded its high estimate selling for $15,275. A very rare one-year type 1747 Mexican 8 Escudos with a locally made bust came in solidly at $32,900 and was a major highlight of the extensive selection of Mexican coins. For collectors of Romanian coinage the E.E. Clain-Stefanelli Collection offered a huge opportunity with a slew of rare patterns augmented by rarities from other sources. Generally the prices for this section were quite strong with the most impressive heights being reached by a pair of 12 Ducat Galben Mare commemoratives (lots 21377 and 21378) that brought between one and a half to two times their high estimates. 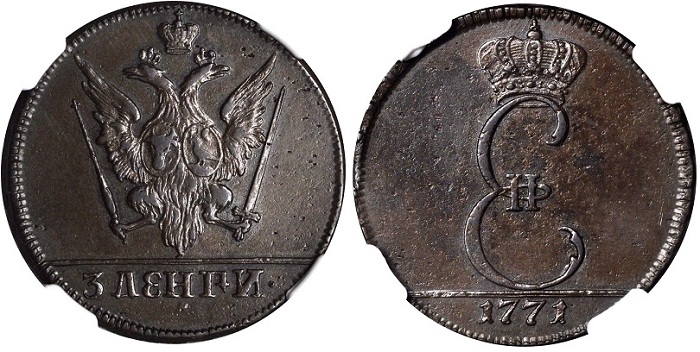 Another exceptional opportunity from the E.E. Clain-Stefanelli Collection was a run of patterns struck for use in Moldavia & Wallachia while under Russian control. Lot 21413 blew away its high estimate as bidders battled their way to a final price of $38,775, quite impressive for a small copper coin. Only three lots later a Mint State Pattern 2 Para/3 Kopek struck in silver was offered and in-room bidding drove it to a final price of $76,375. Shortly after a group of Russian gold proof coins from the Kiev Collection proved to be the crescendo of the auction. Lots 21433, 21436, 21437 and 21444 were all exceptional rarities and performed as such, each bringing between 1.75 and six times their high estimates. Even these heights were dwarfed by the two goliaths of the auction, lots 21442 and 21445. The first of these was a massive 37 ½ Ruble in PCGS Proof-62, formerly in the esteemed Mortimer Hammel Collection, which drew the attention of at least seven bidders with the winner offering $199,750 to obtain this extreme rarity. Before the room had a chance to catch its breath, a 1908 25 Ruble in PCGS Proof-65 was offered, also from the Mortimer Hammel Collection. After very serious bidding it was hammered at a whopping $329,000!

This sale proved to be quite exciting for bidders in the room as well as those watching and bidding online through our website. Focus on quality certified pieces was apparent and will no doubt be a trend in future sales. Currently Stack’s Bowers Galleries is accepting consignments of world and ancient coins for the New York International Numismatic Convention in January and their next Hong Kong Auction in April. Consignment specialists can be reached at 949-253-0916 or via email at .