The government and treasury of St. Helena have launched their first gold bullion coin which has been specially commissioned by the East India Company (a long-term and historic trading partner with St. Helena) and specially marketed for the investment-bullion market. The new, 2018-dated coins bearing this specific design and the legacy denomination of one guinea are being issued for the first time in over 350 years after its initial release. 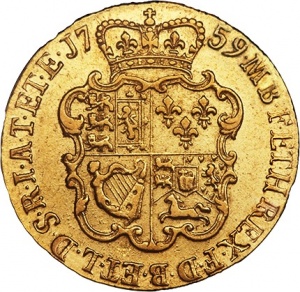 The “rose crown shield” guinea was first issued in 1727 as a tribute to the original coins released during the reign of King George II. It derives its name from the elaborately decorated crowned shield of the royal arms, which was commonly compared to an open rose. The shield itself is divided into four quarters and depicts representations of the kingdoms of England (and Wales), Hannover, France, and Ireland. The shield, or crest, denoted that aside from being king of England, Scotland, and Ireland—with the titular claim to the throne of France—George II was also Duke of the Electorate of Brunswick-Lüneburg. The latter was the ancestral homeland of the new Hanoverian Dynasty, which inherited the English throne upon the death of Queen Anne in 1714. The distinctive and intricately detailed design remained in use well into the reign of King George’s grandson and successor, King George III.

The East India Company’s bullion-quality coins are issued by the treasury of St. Helena and recreate the reverse design found on the historic rose crown shield guinea. The legend includes the coin’s weight, the word GUINEA, and the fineness and metal.

The obverse includes the effigy of HM Queen Elizabeth II designed by renowned sculptor Raphael Maklouf, which was in use on circulation and commemorative coinage of the United Kingdom from 1985 to 1997. The inscription of THE EAST INDIA COMPANY is placed just under the Queen’s portrait, while above it are the denomination, ST. HELENA, QUEEN ELIZABETH II, and 2018. The gold coin’s face value is £25. The silver coin has a face value of £1.25, reflecting its weight of 1.25 troy ounces.

The coins are available exclusively from U.S. precious-metals distributor PM Capital, LLC. The gold coins are packaged in increments of 25 pieces per coin tube. More information on the Rose Crown Shield Guinea coins can be found here or by calling in the United States at (800) 599-8391.

The Historic and Continued Connection Between St. Helena and the East India Company.

Situated in the middle of the South Atlantic Ocean is St. Helena, a small British territory first discovered by the Portuguese in 1502. The Island was fortified by the East India Company after it was awarded a charter to govern by Oliver Cromwell in 1657. ­The island became an essential refueling port for East India Company ships and merchants en route to the East, serving as a vital lifeline to passing ships on the long journey home. In the late 17th century, the East India Company led the transportation of gold from Brazil to London, docking at the settlement of St. Helena during the first gold rush. Gold supplied by the East India Company was used to strike a number of guineas during King George II’s reign and was marked by His Majesty’s Treasury with the provenance mark “E.I.C.” under the effigy of the king. To this day, St. Helena remains renowned as the island where Napoleon was held captive from the time  following the Battle of Waterloo until his death in 1821.

St. Helena and the East India Company: The Empire Collection celebrates the history of the EIC