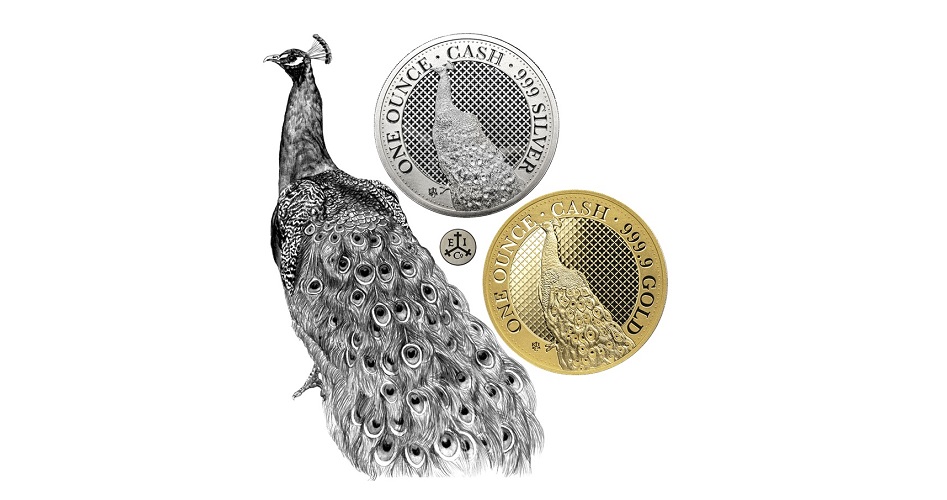 The government and treasury of St. Helena, in partnership with the East India Company, have released (23rd September) their latest gold and silver coins struck in Brilliant Uncirculated quality, which is part of the series entitled “Treasures of India.” The new gold and silver coins feature India’s national bird, the stately peacock. Respected in religious scriptures and protected by the Indian Parliament, the peacock is considered sacred in India, occupying a special position in the country’s culture. This majestic animal is a symbol of prosperity, compassion, soul, and peace, thought to convey good luck and eternal love. Its feathers represent “a thousand eyes” and are believed to bring harmony, serenity, peace of mind, and good fortune. This beautiful bird has a special place in the stories and historical folklore of many different countries and peoples. According to Greek mythology, for instance, the peacock was Hera’s sacred animal, whose tail contains the one hundred eyes of Argos, which Hera moved to its tail before his death. In Hindu Culture, the peacock is associated with the deity Lakshmi and symbolises patience, kindness, compassion, and good luck.

Of particular rarity and symbolism is the white peacock. Breathtakingly beautiful, they are very rare and are seen as a sign of good luck. The white peacock is thought to represent Jesus Christ and stands for resurrection, renewal, and immortality.

The coins are designed by renowned animal artist Veronica Mackinnon, who has captured the stunning beauty and mystique of India’s national bird featured on many religious buildings and artefacts, including the magnificent Peacock Throne of Shah Jahan, fifth Mughal Emperor, who ruled from 1628 to 1658. Displayed on a patterned background, the peacock is seen in repose, the feathers of its tail cascading down in a beautiful pattern of natural shimmering iridescent colours. The text ONE OUNCE CASH and 999.9 GOLD or .999 SILVER is placed around the design. The East India Company’s distinctive mintmark is placed to the lower left.

The obverse side includes the Commonwealth effigy of HM Queen Elizabeth II created by Engraver Jody Clark and introduced onto the coinage of St. Helena in 2019. The denomination of £100 (gold) or ONE POUND (silver) is seen under the Queen’s likeness which also includes the year of issue, 2020.

Both gold and silver coins are exclusively distributed through U.S. based precious metal retailer, APMEX Inc. Exceptionally limited, the 2019 Tiger and 2020 Peacock coins will be followed by further releases of silver and gold coins celebrating India’s vast animal kingdom. For additional information, please visit the website of APMEX.