The East India Company Bullion Ltd, in partnership with the treasury of St. Helena, has released their first-ever sovereign-denominated gold Proof coins to coincide with the international celebrations of the bicentenary of the birth of Queen Victoria. Her reign presided over one of the most profound eras of flux and innovation in Western history, so much so that the era is associated with Victoria’s name. The Victorian Era helped to transition Great Britain’s economy from thriving merchant trades to the most industrialised powerhouse on Earth.

Born on the 24th May 1819, HRH Alexandrina Victoria, Princess of Kent, was the only child of HRH Edward Augustus, Duke of Kent, and was only one of two legitimate royal grandchildren born during the reign of her grandfather, King George III. With the accession of her uncle, the Prince-Regent as George IV, in 1820, the infant princess became third in line to the British throne. Then, with the accession of the Duke of Clarence as William IV in 1830, she was heir-presumptive. On the early morning of the 20th June 1837, the young princess was told of the death of her beloved uncle and that she was now Queen. The Victorian Era was a golden age of discovery, invention, and economic prosperity due to the Industrial Revolution and was a time when the Sun literally never set on the British Empire. The Queen’s likeness appeared on coins in countries across the world and on all continents. After a reign of more than 63 years, Queen Victoria died just 22 days into the 20th century, symbolising an end of the previous century and an end to her own extraordinary era. In 2019, she is remembered on the bicentenary of her birth and the achievements realised during her long and influential reign.

Included in the five-coin sovereign-denominated gold series are some of the most renowned numismatic reverse designs on Victorian coinage, while the obverse side of each denomination bears the effigy of Her Majesty Queen Elizabeth II created by engraver Jody Clark. The text around the Queen’s portrait is surrounded by her legend ELIZABETH II DEI GRATIA REGINA F. D. ST HELENA.

The Five Coins That are Included

Queen Victoria’s legacy is remembered on a new five-coin series issued by the treasury of St. Helena and these are their first-ever sovereign-denominated coins. The series includes five pieces, ranging from five pounds to a quarter sovereign.

The £5 gold piece is inspired by the legendary Una and the Lion £5 gold coin and features an interpretation of the young Queen standing in a flowing gown, depicted as Lady Una, a character from Edmund Spenser’s 1590 poem entitled “The Faerie Queene.”

Around the design are the words DIRIGE DEUS GRESSUS MEOS, which are repeated. 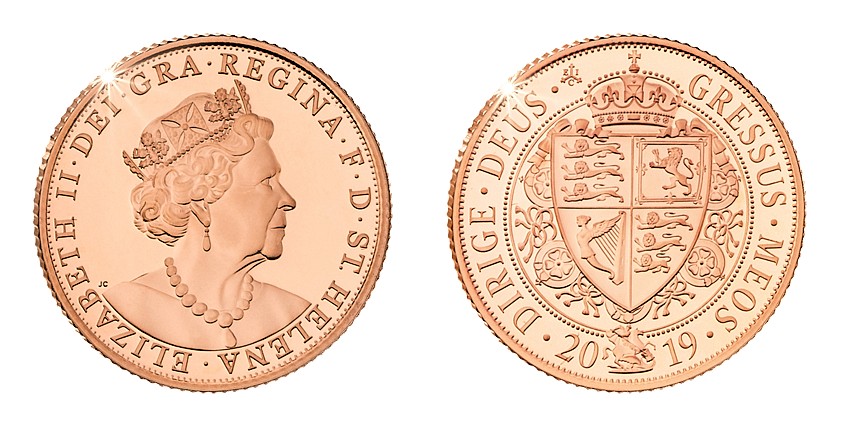 This coin is inspired by Queen Victoria’s last issued half-crown.

Half sovereigns issued during 1893-1901 were the first to feature Benedetto Pistrucci’s classic depiction of St. George and the dragon. Introduced in 1816, the graceful and classically engraved depiction of England’s patron saint slaying the dragon was first seen during the reign of King George III following the Great Recoinage Act of 1816. Prior to the issue of the 1893 half sovereign, the reverse designs had included the classic British Shield with slight variations since its introduction in 1817.

This allegorical symbol of Great Britain has been seen on copper coinage since the reign of King Charles II. During Queen Victoria’s reign, this Seated Britannia design was to be included on all three denominations from the penny to the farthing. In 1860 the penny, half penny, and farthing were decreased in weight, diameter, and composition. A new design was created by Leonard Charles Wyon, who continued with the depiction of a seated Britannia symbolising Britain as ruler of the waves. Notable on the new design was a ship sailing out to sea on her right with a lighthouse to her left. 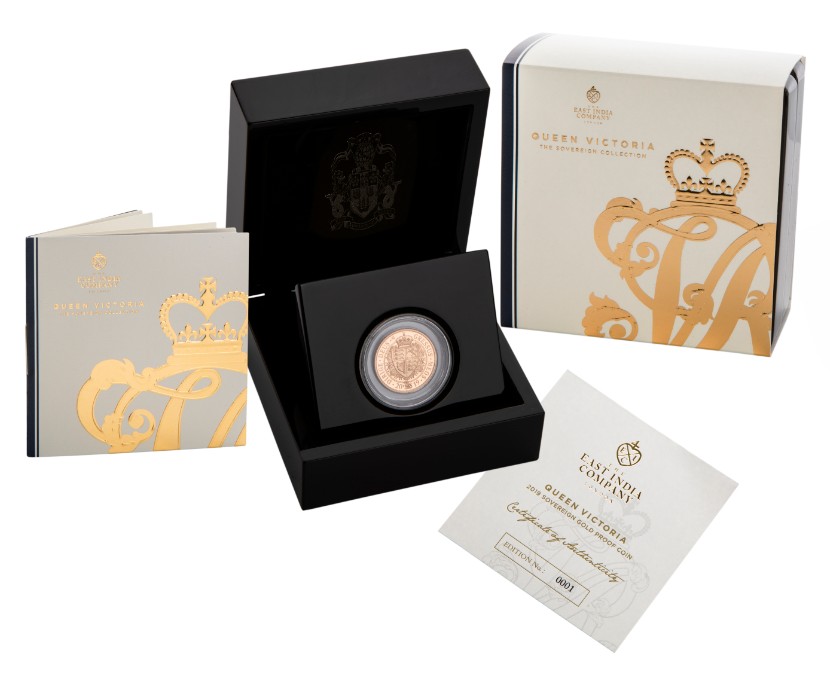 The collector coins in the series are available separately and are housed in an East India Company-branded case. 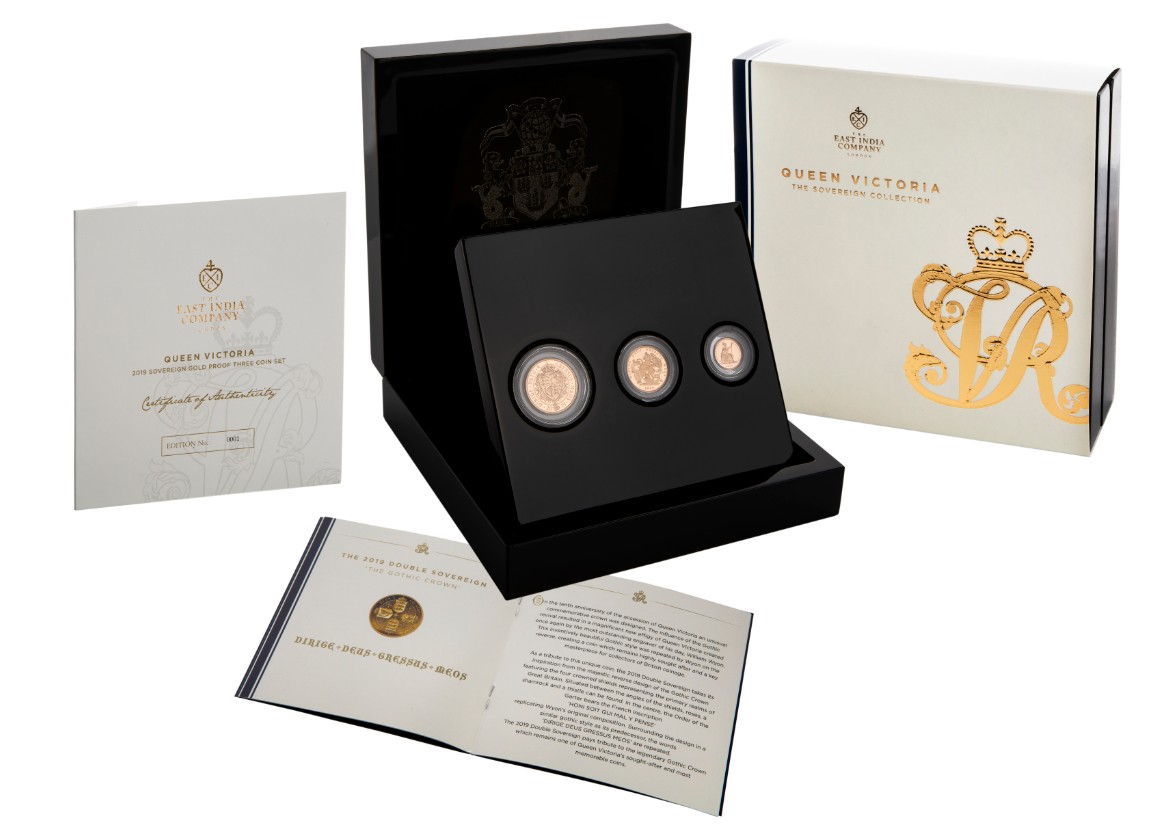 A three-coin set is also available and includes the quarter, half, and one-sovereign coins. 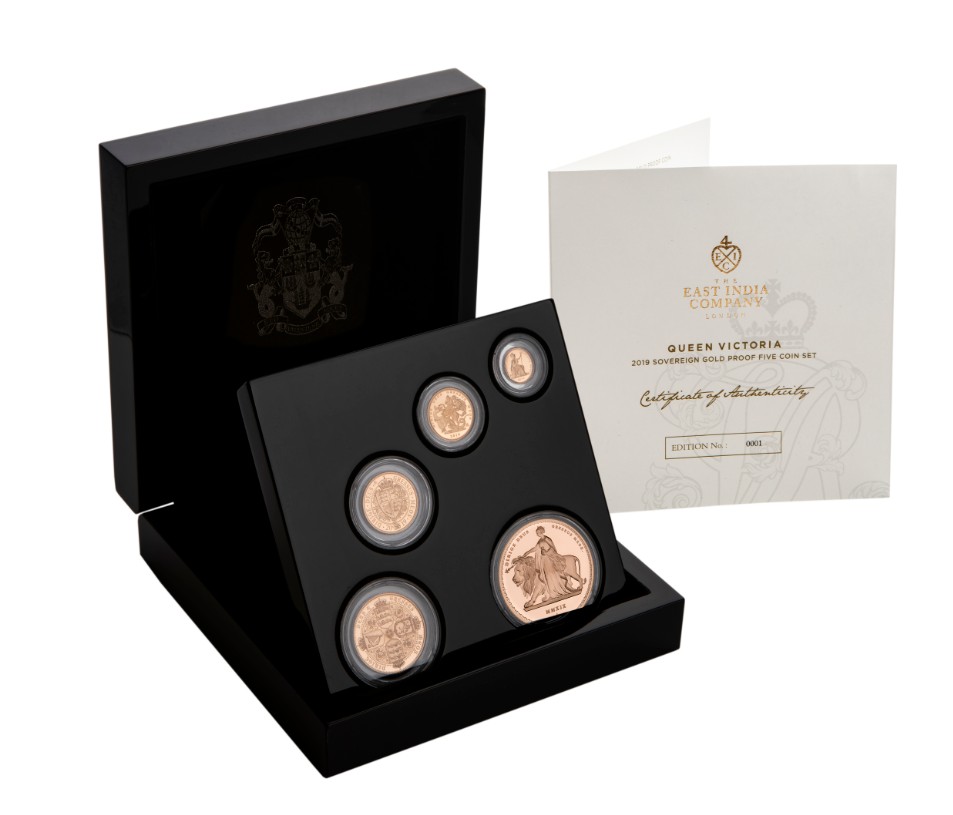 A five-coin set that includes all denominations and is limited to 200 sets, is also available.

For those interested in the St. Helena/East India Company Sovereign collection, please visit the following websites.

And, for the 2019 quarter sovereign Proof coin, please click here.