The Central Bank of Sri Lanka has announced (7th September) that a new collector’s coin will be issued which celebrates the 60th anniversary of friendship and diplomatic relations between Colombo and Tokyo.

Sri Lanka, formerly known as Ceylon, established diplomatic relations with Japan in 1952, four years after gaining independence from the United Kingdom in 1948. Since then, the two governments have enjoyed a very prosperous and steady friendship with the Tokyo also contributing to several government initiatives and infrastructure projects in Sri Lanka. 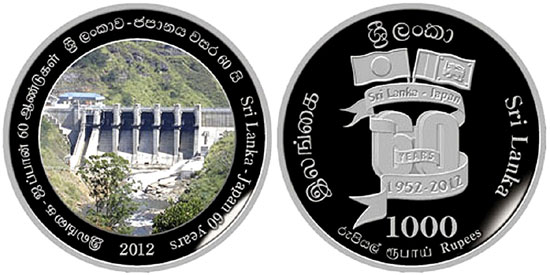 Struck by the Mint of Japan, the coin has a face value of 1000 rupees and includes a colorized application which depicts the Upper Kotmale Hydropower Project, located within the Nuwara Eliya District in the Central Province of Sri Lanka. This project is an initiative partially funded by the Japan Bank for International Cooperation. When fully operational, the facility will be the third largest hydroelectric dam in the country. The reverse of the coin includes a logo for the 60th Anniversary of the establishment of diplomatic relations between Japan and Sri Lanka, this insignia was especially designed by the Mint of Japan.

Struck in proof quality, the coin is minted in sterling silver with a weight of 20 grams and a diameter of 35 mm. A total mintage has been authorized at 20,000 pieces. The Mint of Japan has announced that this is the second commission from a foreign country they have received for the production of coinage, the first having been the Government of New Zealand in 2007. Both the Central Bank of Sri Lanka and the Mint of Japan have been authorized to retail the coin to interested collectors.

For more information, please visit the websites of the Mint of Japan at: http://www.mint.go.jp/eng/coin/international/commemorative/index.html (sales in Japan) or the website of the Central Bank of Sri Lanka at: http://www.cbsl.gov.lk/htm/english/13_cart/products.asp  (international sales)