The United States Mint will be offering three special numismatic products to celebrate the 50th anniversary of the Kennedy Half Dollar. The products will include coins struck at four different mint facilities, in three different metals, and with four different finishes. The first product is scheduled to go on sale later this month.

The Kennedy Half Dollar was introduced in 1964 to memorialize President John F. Kennedy. The coin had been authorized by Congress just a month after his assassination. The obverse features a profile portrait of President Kennedy designed by United States Mint Sculptor-Engraver Gilroy Roberts based on a portrait prepared for Kennedy’s presidential medal. The reverse design by United States Mint Sculptor-Engraver Frank Gasparro is based on the presidential seal. It includes a heraldic eagle with a shield on its breast, holding an olive branch and bundle of thirteen arrows, with a ring of 50 stars surrounding.

For the first year of issue in 1964, the Kennedy Half Dollar was struck in a composition of 90% silver and 10% copper. For the years 1965 to 1970, the composition was changed to 40% silver and 60% copper. From 1971 onwards, the standard versions have been struck in 91.67% copper and 8.33% nickel, although certain numismatic versions have been struck in 40% silver or 90% silver. Starting in 2002, the half dollar has not been produced for general circulation, but only produced in the limited quantities necessary to meet demand from collectors. 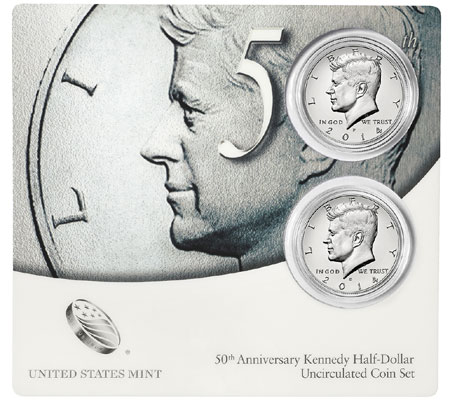 On July 24, 2014, the United States Mint will begin accepting orders for the 50th Anniversary Kennedy Half Dollar Uncirculated Coin Set. This product will contain two 2014-dated half dollars struck in the standard copper-nickel clad composition at the Philadelphia and Denver facilities, carrying the “P” and “D” mint marks. These coins will replicate the portrait used on the original 1964 design. The two coins are packaged in a coin card and folder, which will contain information about the 50th anniversary of the coin design, coin specifications, and a certificate of authenticity.

The uncirculated coin set is priced at $9.95 each. There is an initial ordering limit of five sets per household indicated. There is no established mintage or product limit. 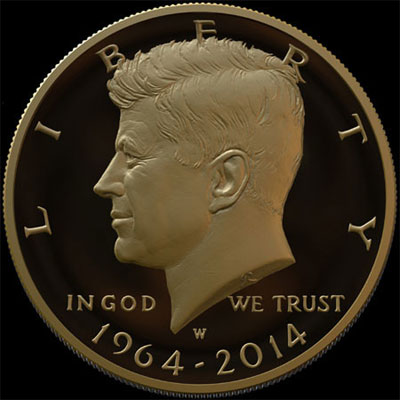 On August 5, 2014, sales will begin for the 50th Anniversary Kennedy Half Dollar Gold Proof Coin. The coin will be struck in three-quarters of an ounce of 24 karat gold at the West Point Mint. The portrait will once again replicate the original 1964 design and the coins will carry the dual date of “1964-2014”.

The US Mint has not yet announced whether a maximum mintage will be established for the gold coin. There will be an initial ordering limit of five coins per household. Pricing has also not yet been provided and will likely be established shortly before the release. The Mint has confirmed that the gold proof coins will be available for sale at their booth at the ANA World’s Fair of Money held in Rosemont, Illinois from August 5-9, 2014.

The four coin sets will be priced at $99.95 each. The Mint has not yet announced whether there will be a maximum mintage. An initial ordering limit of five sets per household will be imposed. The sets will be released in fall 2014.