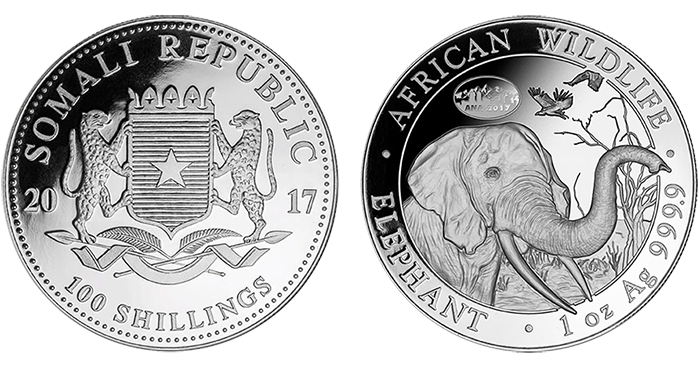 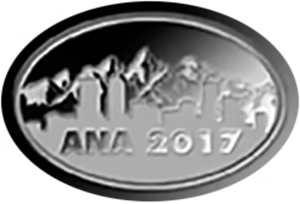 This week, at the World’s Fair of Money in Denver, Colorado, APMEX will be the dealer for another special silver Elephant. The coins, dated 2017, feature the 2018 design motif and a special privy mark: a tiny, frosted Denver skyline, backed by the Rocky Mountains, enclosed in an oval with ANA 2017 incused below the cityscape. The privy mark is just above the head of the elephant. The total mintage (some of which is being sold in Germany; see below) is limited to 1,000. 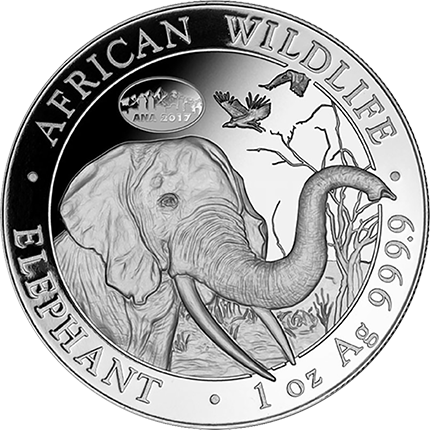 The 2018 reverse depicts the head and shoulders of a single elephant in the lower third of the field, with its trunk partly raised and the tips of its tusks and trunk extending into the border area. In the background to the right are several dry branches, with two birds in flight above them. The wide, plain border, with raised inner and outer rims, holds the words • AFRICAN WILDLIFE • above and, reading counterclockwise from lower left, ELEPHANT • 1 oz Ag 999.9 (all in relief). 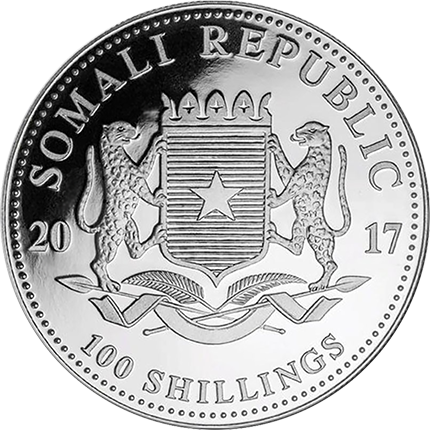 The obverse of the 1-ounce coin features two rampant leopards supporting the arms of Somalia above an emblem consisting of two crossed palm fronds and two crossed spears draped with a plain ribbon. The words SOMALI REPUBLIC appear above, and the denomination, 100 SHILLINGS, below. The date (in this case 2017) is divided by the central device, and the entire design is encircled by a beaded border.

APMEX can be found at the World’s Fair of Money in booth 252. In Europe, German dealer Kettner Edelmetalle also carried a portion of the limited mintage, but the coins are sold out on the website.   ❑