The Royal Mint of Spain – Real Casa de la Moneda has issued (5th November) their latest set of coins which highlight internationally famous Spanish painters – this is the fifth such series. The first set released in 2008 was dedicated to Velázquez, the second to Salvador Dalí, the third to Goya, and the fourth jointly to Domenicos Theotocopoulos (El Greco), Bartolomé Esteban Murillo, José de Ribera (El Españoleto), and Francisco de Zurbarán.

This year’s set highlights the works of Joan Miró (1893-1983). The five coins that comprise the set, one gold and four silver, highlight some of the artist’s most striking and representative paintings. Earning international acclaim, his work has been interpreted as Surrealism and in numerous interviews dating from the 1930’s onwards, Miró expressed contempt for conventional painting methods as a way of supporting bourgeois society. He famously declared an “assassination of painting” in favor of upsetting the visual elements of established painting. In 1954 he was given the Venice Biennale print making prize and in 1958 he was presented with the Guggenheim International Award. In 1980 Miro received the Gold Medal of Fine Arts from King Juan Carlos of Spain. In 1981, the Palma City Council established the Fundació Pilar i Joan Miró a Mallorca, housed in the four studios that Miró had donated for the purpose. Today, Miro’s paintings sell for between $250,000 and $26 million. A price of $17 million was realized at a U.S. auction for the La Caresse des étoiles (1938) in May 2008, at the time it the highest amount paid for one of his works.

400 €URO:  The obverse portrays a rendering of the work entitled “Self-portrait” painted between 1937 and 1960, from the María Dolors Miró collection, on loan to the Joan Miró Foundation in Barcelona. The reverse depicts the work entitled “Portrait of a Young Girl” painted in 1919, and held by the Joan Miró Foundation in Barcelona. Struck to proof quality in .999 fine gold with a weight of 27 grams and a diameter of 38 mm. A mintage of 3000 pieces has been authorized for this traditional Eight Escudos coin.

50 €URO: The obverse shows an image from the work entitled “Painting” (C.R. nº 460), executed in 1934. It is held in the Joan Miró Foundation in Barcelona. The reverse presents a rendering of the work “The House of the Palm Tree” painted in 1918, which is currently in the collection of the Queen Sofía National Art Museum in Madrid. Struck to proof quality in .925 sterling silver, the coin has a weight of 168.7 grams and a diameter of 73 mm. A mintage of 5000 pieces has been authorized. The traditional denomination of this coin is 50 Reales or one “Cincuentín”. 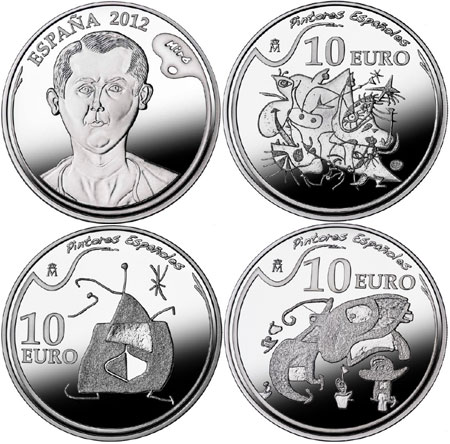 The coins for the Joan Miro set can be purchased individually of as a set of either five or four coins (silver collection) For more information on these and other coins offered by the Real Casa de la Moneda, please visit their website at: https://tienda.fnmt.es/fnmttv/b2c/start/(xcm=Z_TIENDA)/.do Information is available in English – international orders fulfilled.