The announcement of the Spanish King’s decision to abdicate in favor of his heir, the Prince of the Asturias, Prince Felipe came as somewhat of a surprise to many Spaniards as the practice of abdication is not a tradition within the Spanish Crown as it is in countries such as the Netherlands or Luxembourg. 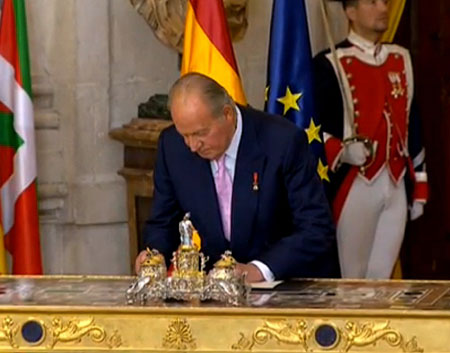 The 76 year old king, who signed the instrument of abdication in the presence of the Prime Minister and his ministers,  is largely credited with restoring democracy to Spain after more than four decades of dictatorship under General Francisco Franco, had served as Spain’s head of state for almost 39 years. The then-Prince of Spain, a Grandson of the country’s last serving monarch Alphonso XIII who himself had been deposed in 1931 was chosen by General Franco as his successor when the Monarchy was restored in 1957.

Since his accession on the 22nd November 1975, King Juan Carlos – instead of preserving the status quo as General Franco had hoped he would do, he set the country on a path of democratic reforms by enacting and supporting new laws which brought political parties into the forefront of Spanish democracy and signed a new constitution in 1981 which guaranteed a parliamentary system and affirmed the Monarchy as that of a constitutional element of government. A crisis in 1982 when a former Colonel loyal to the Fascist ideologies of General Franco attempted to seize the government and nearly did just that had it not been for the actions of Juan Carlos who called on all Spaniards who believed in the democratic reforms Spain had enacted and managed to garnish both the support of both the military and the public which saw a swift end to the attempted coup. 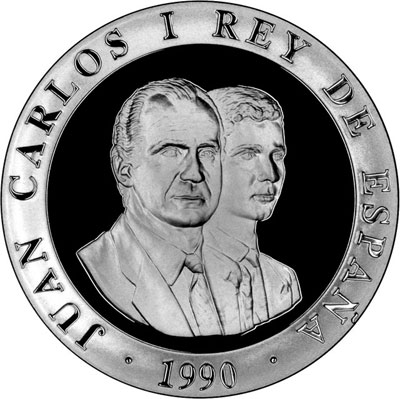 King Juan Carlos I and Spain’s new King Felipe VI as they were portrayed on the 1992 silver 2000 peseta coin issued for the XXV Olympiad, Barcelona.

King Juan Carlos was born in exile – in Rome, he was the son of Prince Juan, Count of Barcelona who himself, had once been considered as a candidate for the restoration of the Spanish crown by Franco who, after believing that the Count would not continue the policies of the Fascist government he headed, chose instead his son, Prince Juan Carlos. In 1962, Juan Carlos married Princess Sophia, daughter of HM King Paul of Greece and sister of King Constantine II. Their son, who is their third child and given the title of Prince of the Asturias – a title given to the heir of the Spanish throne, was invested with this title and position on his 18th birthday in 1986. Prince, now King Felipe married in 2004, his fiancé Miss Letitzia Ortiz, a former journalist who after her marriage, became the Princess of the Asturias and as of today, Queen of Spain. Their eight year old daughter Princess Lenor now becomes the Crown Princess of Spain in her own right and heir to King Felipe.

We will have the latest information from the Spanish Royal Mint on the issue of commemorative coins to mark the accession of King Felipe VI as soon as it becomes available – watch this space.