The Fabrica Nacional de Moneda y Timbre (FNMT) in conjunction with the Casa Real de la Moneda has issued a new silver coin which marks the 250th anniversary of one of the country’s most prestigious military academies, the Royal School of Artillery which is the principal training establishment for artillery warfare in the Spanish Army.

On the 16th May 1764, by order of King Carlos III, the Royal School of Artillery was inaugurated in the Alcázar de Segovia (Segovia Castle). The castle once served as a fortress, a royal palace, a prison and, finally, as a military academy. So picturesque and ornate is Segovia castle that it is said to be one of the inspirations for Walt Disney’s Cinderella Castle.

The Academy reflects many of the advances and set-backs as the country as a whole. During the Peninsular war of 1808 against advancing French troops, The Royal School of Artillery was compelled to evacuate the city when the approaching enemy was in sight of the city limits. The exodus took more than three months to execute and which included transport by land and sea in order to set up activity in the city of Seville, this temporary location would last for more than five years. A devastating fire to the original grounds & location on the 6th March 1862 which lasted 3 days, destroyed the Alcázar and all units of the College. The Royal School of Artillery then took up temporary residence at the Convent of San Francisco. Just three days later, on the 9th March, By Royal Order communicated to the Captain General of New Castile, Queen Isabella II decreed that the temporary San Francisco headquarters in the city of Segovia, be made permanently available to the Director General of Artillery for use by the Royal School of Artillery and is the current location of the Artillery Academy.

Today, the core of the Academy consists of three main or operational areas: Teaching, Research and Simulation. The School of Artillery as it embarks on more than two and a half centuries of service takes pride in providing the military with its future leaders and soldiers able to use the complex technology associated with a modern army and Antiaircraft Artillery to which the royal Spanish Air force integrates within its fighting capabilities, and to integrate them in the development of national defense and joint operations. 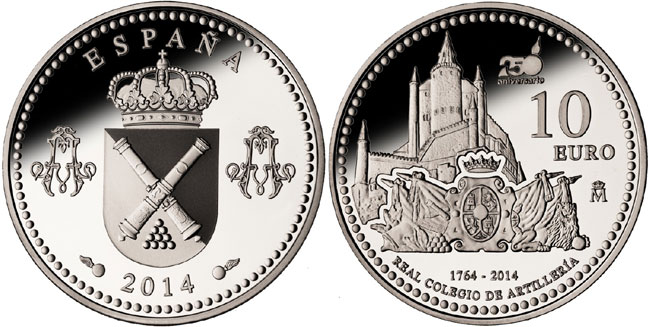 The coin, which does not include an effigy of the reigning King, instead includes the traditional coat of arms of the Royal School of Artillery flanked by two insignias of the academy on both sides. The reverse shows a view of the Alcázar de Segovia along with a traditional representation of the academy which includes a cannon, banners and a reclining lion. The coin is struck as a traditional 8 Reales denomination which corresponds to 10 Euro.

The coin is encapsulated and is accompanied by a certificate of authenticity and packaged in custom presentation case.