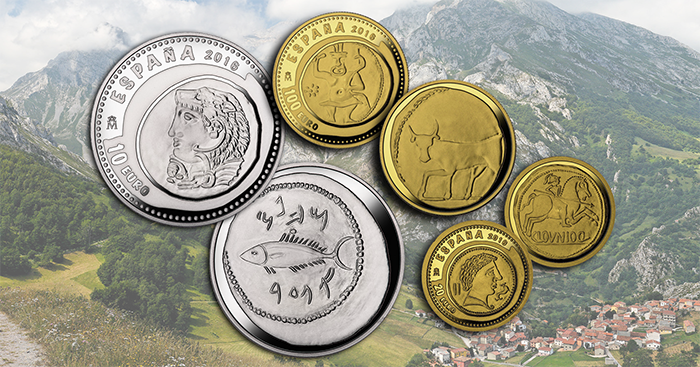 The Fabrica Nacional Moneda y Timbre / Real Casa de la Moneda have launched their latest set of coins in their popular “Numismatic Treasures” series, which focuses on some of the extraordinary coins found in Spain and those exquisite pieces struck in the country as a kingdom. The latest coins include three versions—two gold and one silver—and feature designs of coins that have been discovered during excavations over the centuries as far back as the 6th century BC.

The first series, issued in 2008, was dedicated to the Roman Aureus and the Spanish-Greek Drachma. The second series (2009) featured the Segovian Centen and the Cincuentin, and the third set (2011) highlighted the Spanish-Carthaginian Shekel and the Visigoth Triente (the latter in two separate issues, that of King Swinthila and that of King Leovigild). The 2012 coins selected for the fourth set were the gold Maravedi of Alphonso VIII of Castille (reigned 1158–1214), the Almohad Dinar, and an Alphonso VIII Dinero. The 2014 set featured the coins minted during the era of their Most Catholic majesties, King Ferdinand and Queen Isabella, in 1497. The 2015 set was issued in celebration of the 400th anniversary of the Mint of Madrid with the coins featuring coin designs in use during the reign of Felipe III.

€100 gold—A reproduction of a Hemidracma minted during the third and first centuries BC by the Carthaginians. It was used basically for commercial transactions, mostly as payment of taxes and payment to the troops. The coin was struck mostly in Ebusus (the island of god Bes, now called Ibiza), which was founded by the Phoenicians in 654 BC because of its excellent strategic position on the east-west navigational routes of the era.

The obverse depicts the ancient Egyptian deity Bes, who was worshipped as a protector of households and, in particular, of mothers, children, and childbirth. Bes looks forward, sticking out his tongue. He is dressed in a short skirt and a crown adorned with a crest. He carries a club in his right hand and a snake in his left hand. In the left field is a lotus flower, a very common plant in the north of Africa, where the Carthaginians came from. The reverse depicts a bull, walking to the left with its face toward the viewer.

€20 gold—A reproduction of an As minted in Clounioq (present-day Burgos) during the second and first centuries BC by the Celtiberians. At that time, the Romans had founded Clunia, a short distance from this settlement; Clunia belonged to the Hispania Citerior, one of the two provinces into which the Romans, after their first conquests in the east and the south, divided the Iberian Peninsula. Like the previous coin, its primary purpose was for commercial transactions; unlike the silver Drachma, which we discuss next, it would not have been commonly used in daily life.

The obverse illustrates the head of man with curly hair and a necklace, presumably representing a protective hero of the city. The reverse shows what is known as the “Iberian rider,” an image reproduced on the reverses of coins struck by many Spanish mints in the second and first centuries BC. The horse gallops from left to right, and the rider wears a helmet and carries a spear. The legend, CLOVNIOQ, refers to the mint where the coins were struck.

€10 silver—A reproduction of a Drachma minted in the settlement of Gadir (in Latin, Gades; the present-day city of Cadiz), the oldest continuously inhabited city in Spain and one of the oldest in western Europe. Struck around the third century BC by the Phoenicians, the Drachma was meant for daily commercial transactions, like payment of taxes and of military troops; and it was through these payments to the troops that the coin would readily enter general circulation and common use.

The obverse depicts the head of Melqart, a Phoenician deity identified with the Greek Heracles, covered with the fur of the Nemean lion (a vicious monster in Greek mythology). The reverse shows a tuna fish among Punic or Phoenician letters that can be translated as “struck in Gadir.”

The coins are available separately or as a three-coin set. All options are presented in mint-branded custom cases with certificate of authenticity. For more information on these and other coins issued by the Real Casa de la Moneda, please visit their website. International sales dispatched where applicable.
Share: