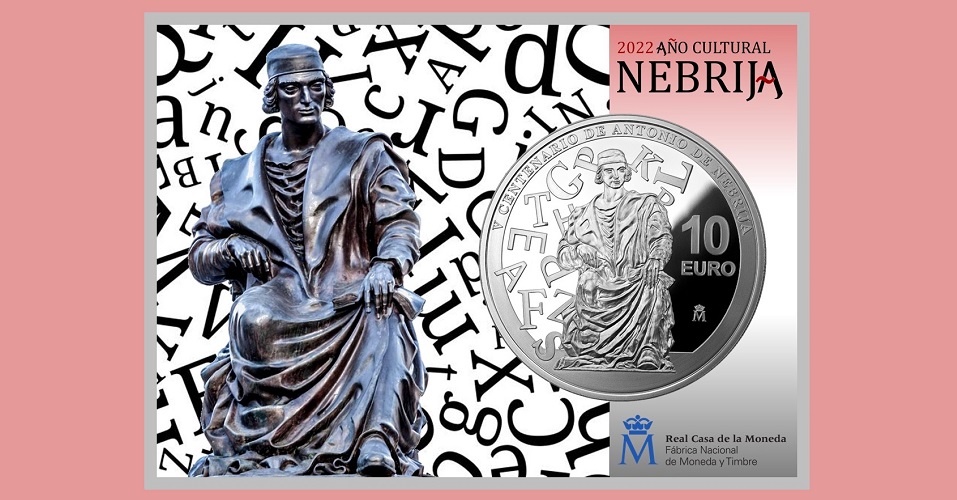 The Fabrica Nacional de Moneda y Timbre — Real Casa de la Moneda has launched new silver Proof collector coins in remembrance of the 500th anniversary of the death of the man who is considered the father of the Castilian language in the written form. The fifth centenary anniversary of the death of Elio Antonio de Nebrija (1444-1522) is being observed in countries where more than 570,000,000 Spanish speakers communicate as a first language. Nebrija’s most well-known work was Castilian Grammar, written in 1492. It was the first publication of its kind written in a Romance language and the first publication in the grammar of the Spanish language of the day. Born in Lebrija, Seville in 1441, Nebrija is remembered in the Spanish-speaking world as the first Hispanic humanist. Nebrija was also credited with introducing the literary works of the Italian Renaissance to the Iberian Peninsula, starting in 1470. His fields of activity were not limited to the enhancement and promotion of the Castilian language but also the classical languages such as Latin, Greek, and Hebrew. Nebrija was a proficient linguist, grammarian, lexicographer, translator, biblical exegete, teacher, professor, writer, poet, historian, royal chronicler, pedagogue, printer, and ultimately a publisher. His works in the Castilian language coincided with the arrival of Gutenberg printing presses which arrived in Aguilafuente, Segovia, in 1472. Nebrija later collaborated with the first university printing press on the Iberian peninsula, that of the University of Salamanca from which his first book, Latin Introductions, was printed in 1481 and became a true best-seller in half of Europe. His works dealt with areas as diverse as law, medicine, astronomy, history, and the education of children. Nebrija died on the 2nd July 1522 and is buried in Alcalá de Henares, Madrid.

The reverse of the coin is designed by the graphic artist Julia Vallinot González, whose focal point of the design is based on the statue of Antonio de Nebrija located in the Sevillian municipal town square of Lebrija. The monument of a seated Nebrija is the work of the Sevillian sculptor José Lafita Díaz (1887-1945). In the backdrop is an allegory of the alphabet of the Spanish language and to the right of the statue is the denomination 10 EURO with the mintmark of the Real Casa placed below. Above the primary design is the inscription V CENTENARIO DE ANTONIO DE NEBRIJA placed along the edge. The obverse of the coin includes an effigy of HM King Felipe VI with the year of issue 2022 placed below the King’s likeness.

Each silver Proof coin is encapsulated and presented in a custom case accompanied by a numbered certificate of authenticity. For additional information about this coin and others available from the Real Casa de la Moneda, please visit their website.

The Greek Mint: The culture of minting