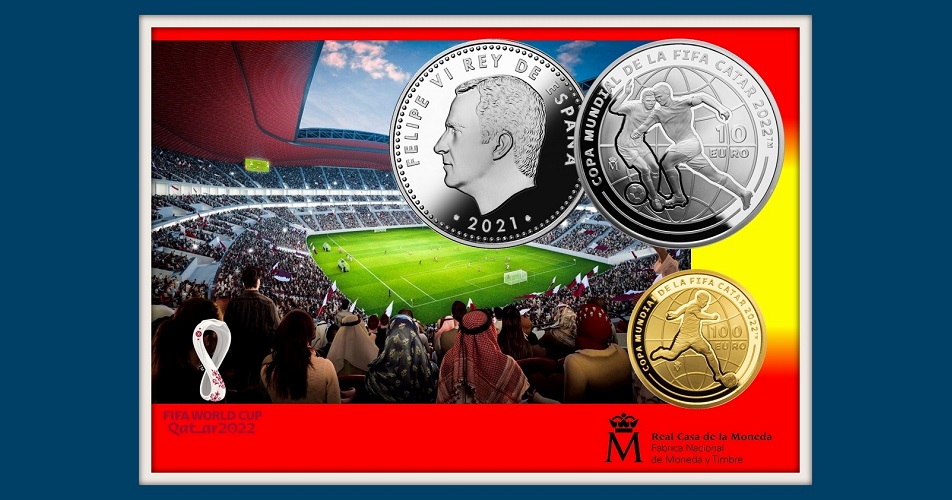 The Fabrica Nacional Moneda y Timbre — Real Casa de la Moneda has released new gold and silver collector coins that are in support of Spain’s national football team, which will be participating in the FIFA World Cup in November 2022. The Fédération Internationale de Football Association, otherwise known as “FIFA,” is the sport’s global governing body. They are also the organisers of the World Cup, which is held every four years. The tournament has been played a total of 21 times since the first in 1930 and has been won by eight national teams during this timeframe. Brazil, for instance, has won five times, and are the only national team to have played in every tournament staged. Spain has participated in the World Cup a total of 14 times; the last time they competed was in 2014.

For 2022, the Middle Eastern nation of Qatar made history when they were chosen to host the world sports event in 2010, beating competition bids from the USA, South Korea, Japan, and Australia in the voting. As such, Qatar will become the first West Asian nation, the smallest country, the first to be held in the Arab world, and the first Muslim-majority country to host the World Cup. There will be 12 individual stadiums in seven cities in Qatar that will host the various tournaments through the month-long competition. Due to Qatar’s high heat levels, the stadiums will be equipped with cooling systems that are environmentally friendly and which aim to reduce temperatures within the stadium by up to 20 °C, or 36 °F. This will also be the first World Cup held from late November to mid-December, making it the first to not be held in May, June, or July, and will be played in a reduced timeframe of around 28 days.

The coins are issued in two options, gold and silver, and dated 2022 on the reverse — in anticipation of next year’s sporting event.

On the reverse in the centre and on a background of a world globe, is the image of two football players in the middle of play, jostling for control of the ball on the field. Surrounding the image is the inscription COPA MUNDIAL DE LA FIFA CATAR 2022™ (“FIFA World Cup Qatar 2022™”).

On the reverse, in the centre and against a background of a globe, is the image of a sole football player with full control of the ball on the field. Surrounding the image is the inscription COPA MUNDIAL DE LA FIFA CATAR 2022™ (“FIFA World Cup Qatar 2022™”).

On the obverse side of both the gold and silver coins is the effigy of HM King Felipe VI facing left seen along with the legend FELIPE VI REY DE ESPAÑA placed above the king’s likeness, with the year of issue 2021 placed below.

Each gold and silver coin is encapsulated and presented in a custom branded case accompanied by a numbered certificate of authenticity. Both coins are available as separate purchases. For more information about these coins and others available from the FMNT — Real Casa de la Moneda, please visit their website.