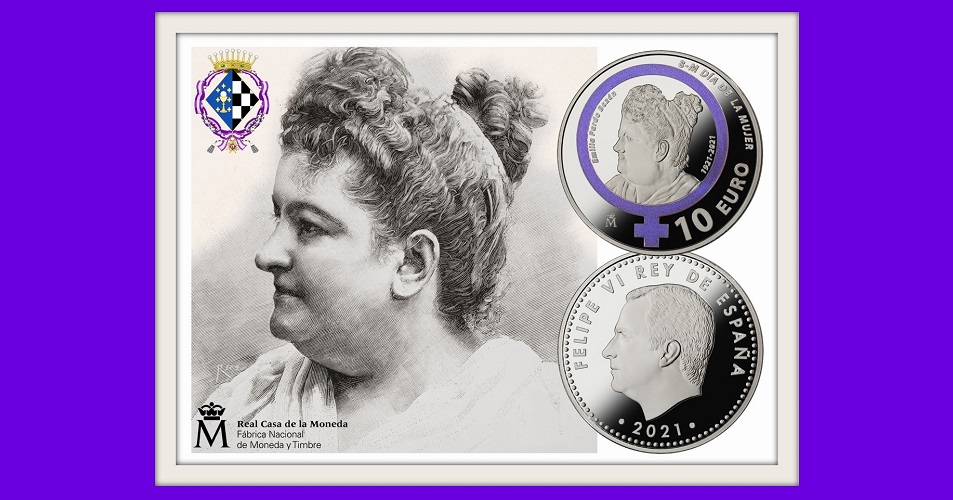 The Fabrica Nacional Moneda y Timbre — Real Casa de la Moneda has issued (22nd February) new silver Proof coins in remembrance of the centennial anniversary of the death of Emilia Pardo Bazan, a prominent activist remembered for championing the rights of women during the latter half of the 19th century.

In Spain, Emilia Pardo Bazán (1851–1921) is prominently remembered on this day. Pardo Bazan is remembered both for her artistic work and as an activist at the beginning of the 20th century, looking to further the cause of women’s rights.

Pardo Bazan is considered one of the best writers in the history of Spanish literature and is recognised as one of the best European writers of her generation. She was a versatile woman who participated in a wide range of artistic and literary activities as a novelist, journalist, essayist, literary critic, poet, playwright, translator, editor, and university professor. She is also Spain’s most prolific author of short stories in Spanish literature, publishing more than 600 over the course of her career.

In 1908 Pardo Bazan was accorded the title of Countess of Pardo Bazán, personally bestowed to her by King Alfonso XIII in recognition of her important role in the literary world. As a leader of women’s rights and feminism in Spain at a time when this kind of activity was frowned upon, she dedicated her life to defending them until her death and through her literary work. Despite having grown up with her father supporting his daughter’s thoughts for gender equality, her husband did not feel the same. In time, he was unable or unwilling to endure the ensuing social scandal created by his wife, who dared to express her views about such matters. By 1886 the couple agreed to an amicable separation. Emilia lived with their children while her husband took up residence in a castle in Santa Cruz. After their separation, Pardo Bazan began a relationship with the writer Benito Pérez Galdós (1843–1920), which developed into a long-term affair that lasted for the rest of their lives.

Pardo Bazan died on the 12th May 1921 in Madrid at the age of 69 years and was survived by her three children. In 1926, a monument was unveiled and dedicated to Pardo Bazan, which was placed next to the Palacio de Liria, close to Pardo Bazán’s home address in Madrid. The monument was unveiled on the 24th June 1926 and was attended by King Alfonso XIII and Queen Victoria Eugenie.

The reverse side of the coin includes a purple colourised universal female gender symbol ♀ off-centred with a portrait of Emilia Pardo Bazan placed within the circle of the symbol. The image of Pardo Bazan is based on an earlier etching which is thought to have been produced during the Exhibition Universale of 1889 at Paris and during the inauguration of the Eiffel Tower. Within the circle is the commemorative inscription Emilia Pardo Bazán and 1921-2021. In the upper-right side along the edge is the text 8-M DIA DE LA MUJERE (“8 March, Day of the Woman”), and in the lower-right part is the face value 10 EURO. At the bottom-left side is the mint mark of the Real Casa de la Moneda — a crowned M.

Each coin is encapsulated and presented in a custom branded case accompanied by a numbered certificate of authenticity. For more information about this coin and others available from the FMNT — Real Casa de la Moneda, please visit their website.