The Fabrica Nacional de Moneda y Timbre — Casa Real de la Moneda has released (27th May) their latest collector coins which are part of the ongoing Europa “the Ages of Europe” Star series highlighting the various eras of European civilisation. The specific ages or epochs are taken from the seven eras depicted on the euro-zone banknote series introduced in 2002. The common theme for the 2019-dated series focuses on the Renaissance, which was prevalent in Europe during the 14th century to the 17th century, promoting the rediscovery of classical philosophy, literature, and art, as well as an awakening of a more enlightened mode of thinking and concept in matters political.

The Spanish coins feature three elements of cultural life which reflect this time. The depictions include a portrait of the well-known Don Quixote, the Palace of Carlos V, and a portrait of Juan de la Cosa.

Juan de la Cosa (1460–1510) was a Spanish navigator and cartographer, known for designing a European world map that incorporated the territories of the Americas. De la Cosa played an essential role in the first and second travels of Christopher Columbus to the Americas, since he was the owner and captain of the Santa Maria, one of the three ships which landed in the New World in October 1492. The image of la Costa is depicted with a colourised application on the Proof silver strikes only.

The Palace of Carlos V, housed in the Alhambra, Granada: Emperor Carlos V (reigned 1516–1556) decided to build a magnificent royal residence in the place conquered by his grandparents, the Catholic Monarchs Ferdinand and Isabella. The palace also became a Spanish symbol of the triumph of Christianity with the final victory in the war with Granada, which defeated the last Muslim state in Iberia and all of Western Europe.

Don Quixote: The popular Spanish novel was written by Miguel de Cervantes (1547–1616) whose actual title is “The Ingenious Gentleman Sir Quixote of La Mancha.” Cervantes is considered by many to be the greatest writer in the Spanish language and was one of the world’s preeminent novelists.

The common obverse design for the fourth Europa series is the work of artisans from the Monnaie de Paris and features a massive, off-centre star in the background. In the case of the Spanish example, a profile portrait of HM King Felipe VI is centred along with his legend, which is placed around his portrait. The text RENACIMIENTO (Renaissance) is placed along the border and above the king’s legend.

The actual Europa Star logo is prominently featured on the obverse side, just under the king’s portrait with the year of issue 2019 placed to the lower right of the royal effigy. 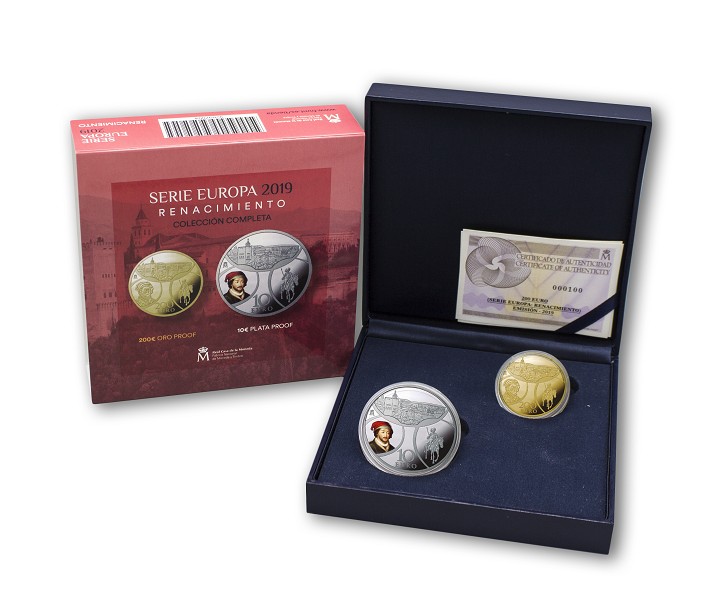 Each gold and silver coin is encapsulated and presented in a custom Real Casa de la Moneda cases and is accompanied by a numbered certificate of authenticity. The Spanish coins are referred to in their traditional Spanish denominations of eight reales (silver) and four escudos (gold), and are available separately or as a set of two coins. For additional information about these coins and others offered by the FMNT — Real Casa de la Moneda, please visit their website.