(Photos of paintings courtesy of the Thyssen-Bornemisza Museum.)

The Fabrica Nacional Moneda y Timbre–Real Casa de la Moneda have unveiled (7th June) the latest series of their artistically influenced coins detailing some of Spain’s greatest treasures and masterpieces housed in many of the country’s exceptional museums and palaces.

This latest series, the fifth to date, features masterpieces from a diverse range of artists, eras, and styles. The series also marks the 25th anniversary of the Thyssen-Bornemisza Museum (opened in 1992), where all the artworks highlighted on the coins are displayed. Part of the “Golden Triangle of Art” in Madrid, the Thyssen-Bornemisza fills the historical gaps in the other two museums, the Prado and the Reina Sofia national galleries. With over 1,600 paintings, the Thyssen-Bornemisza was once the second-largest private collection in the world after the British Royal Collection. The museum was the result of a competition held in 1987–88 to house the core of the collection of Baron Thyssen (1921–2002). The baron had tried to enlarge his museum, the Villa Favorita in Lugano, but failed to obtain the needed permission from the local government, so he searched for a location in Europe.

The five coins in the series are as follows (hover on images to zoom). 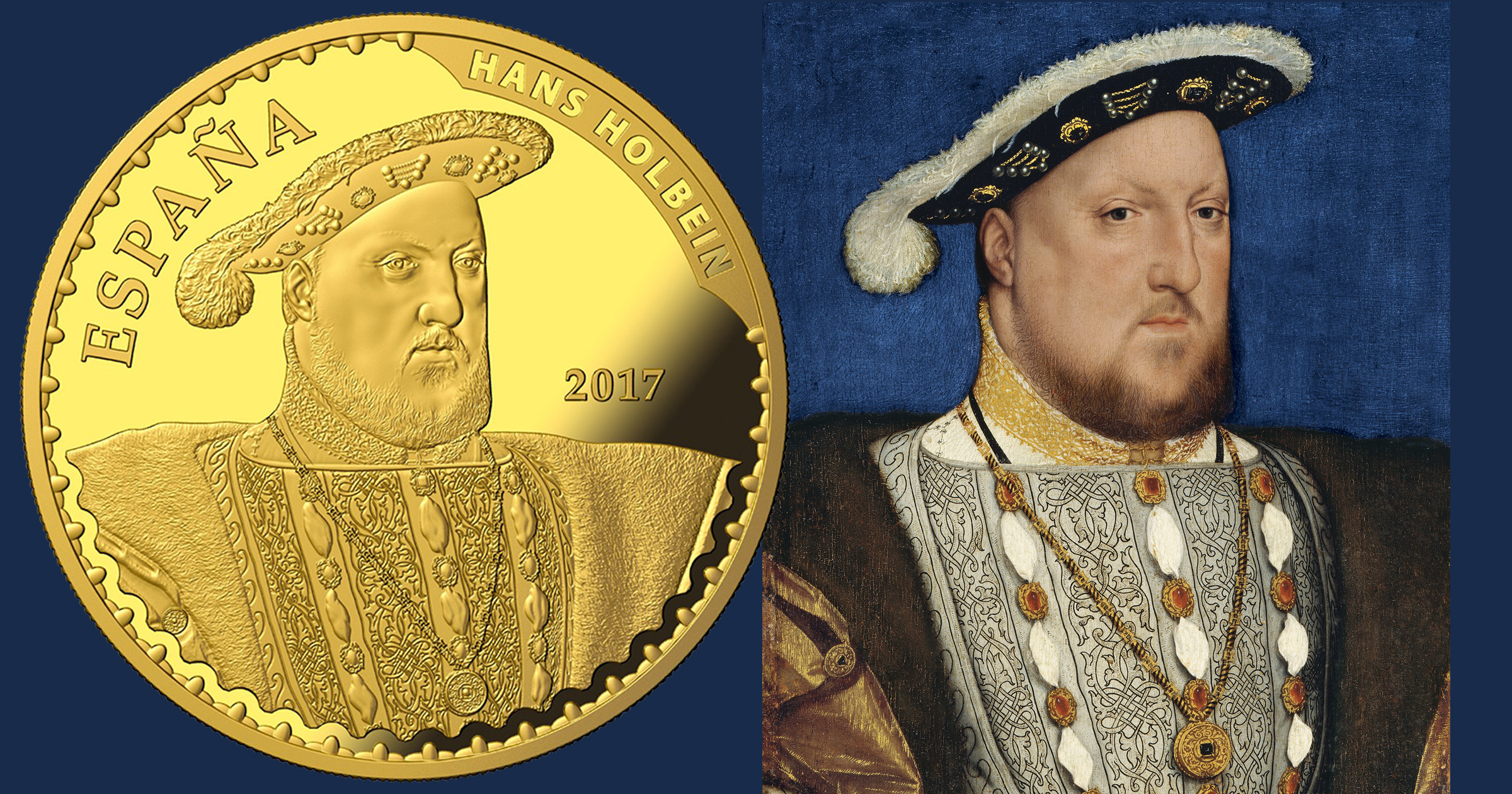 Obverse—Hans Holbein, the Younger, Portrait of Henry VIII of England (ca. 1537). This likeness of the famous Tudor king is a magnificent example of Holbein’s remarkable style, characterised by a monumental rendering of figures which are nonetheless endowed with considerable psychological depth. In this markedly linear portrait, Holbein uses the frontal pose of the regal model and the position of his hands to convey the sitter’s powerful personality and majestic bearing. 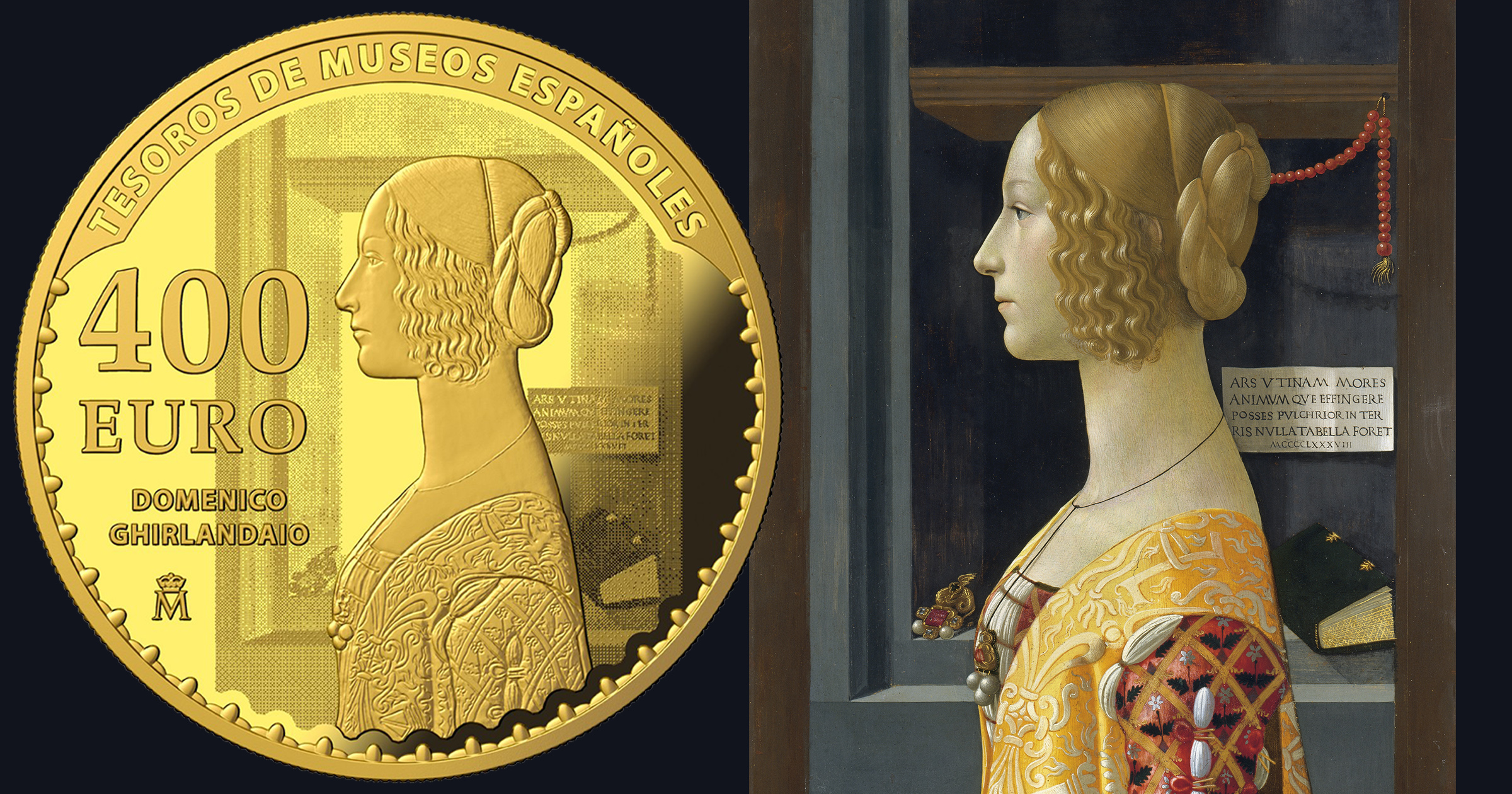 Reverse—Domenico Ghirlandaio, Portrait of Giovanna Tornabuoni (1489–90). This superb panel is a fine example of 15th-century Florentine portraiture. Artists of the time followed classical dictates: body proportions were idealised, while faces left devoid of expression were expected to convey character. In this half-length portrait, the sitter appears in strict profile, with her arms bent and her hands clasped together. In the background, a selection of personal belongings appears within a simple architectural frame. 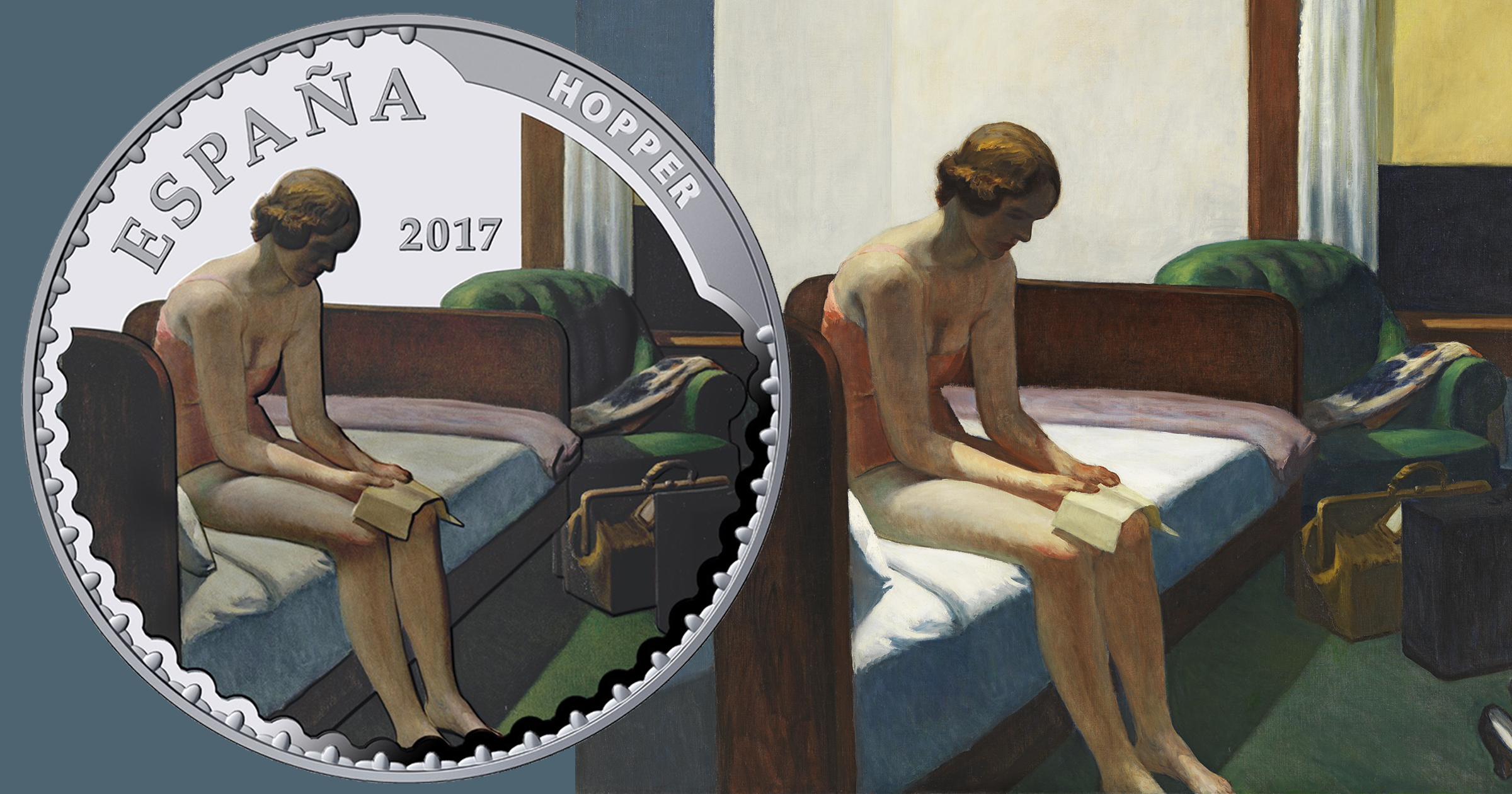 Obverse—Edward Hopper, Hotel Room (1931). The loneliness of the modern city is a central theme in Hopper’s work. In this painting, a woman sits on the edge of a bed in an anonymous hotel room. It is night and she is tired. The space is confined by the wall in the foreground and the chest of drawers on the right, while the long diagonal line of the bed directs our gaze to the background, where an open window turns the viewer into a voyeur on what is happening in the room. 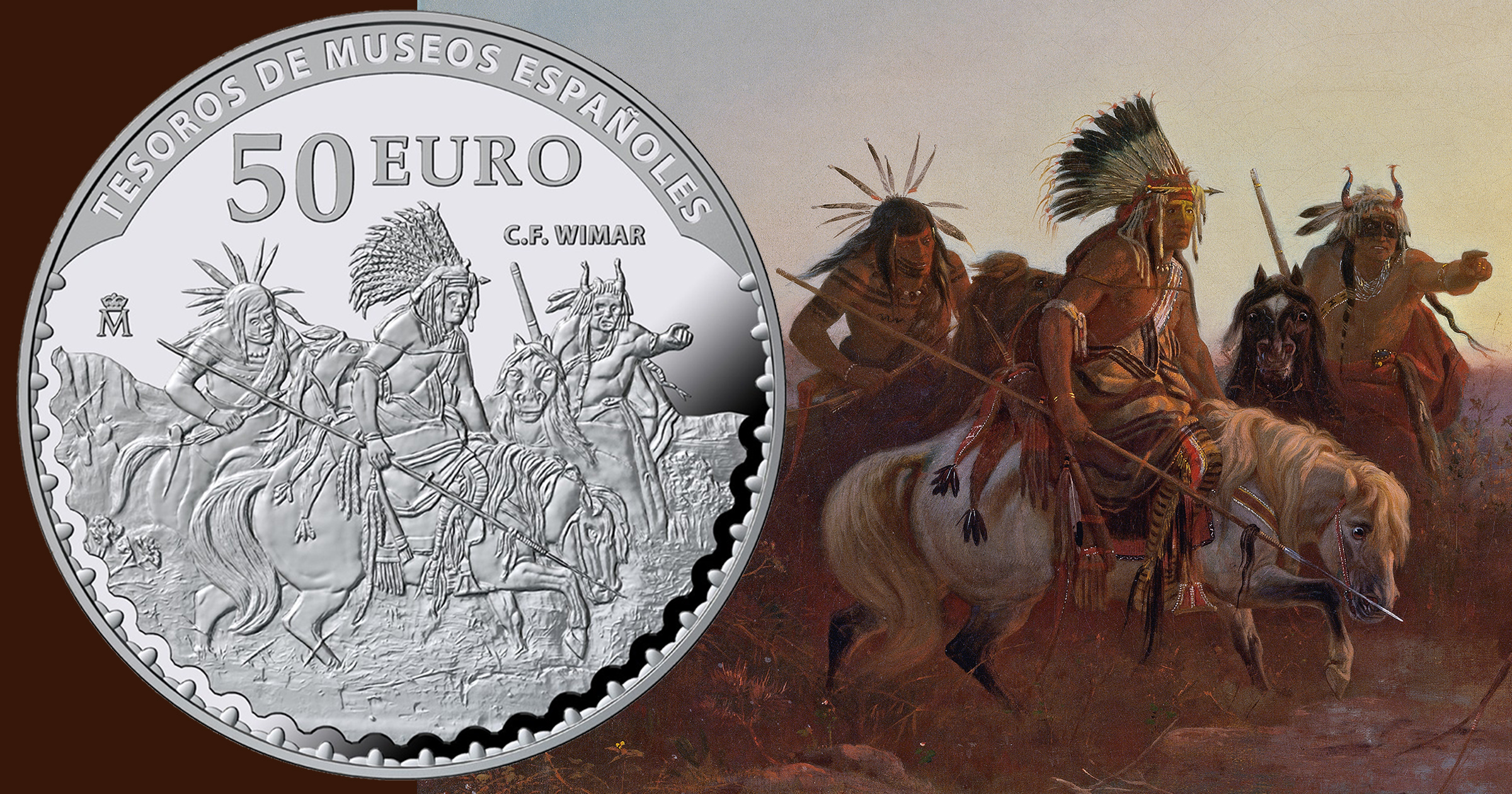 Reverse—Charles Ferdinand Wimar, The Lost Trail (ca. 1856). Wimar depicts the Indians as exiles, roaming a land that is no longer theirs. Their appearance, with naked torsos and painted faces, reflects the imagery established by his contemporaries and European romantic fantasies about the free and adventurous life at the American border. The artist uses in this canvas a very powerful, painterly language and a highly studied composition. 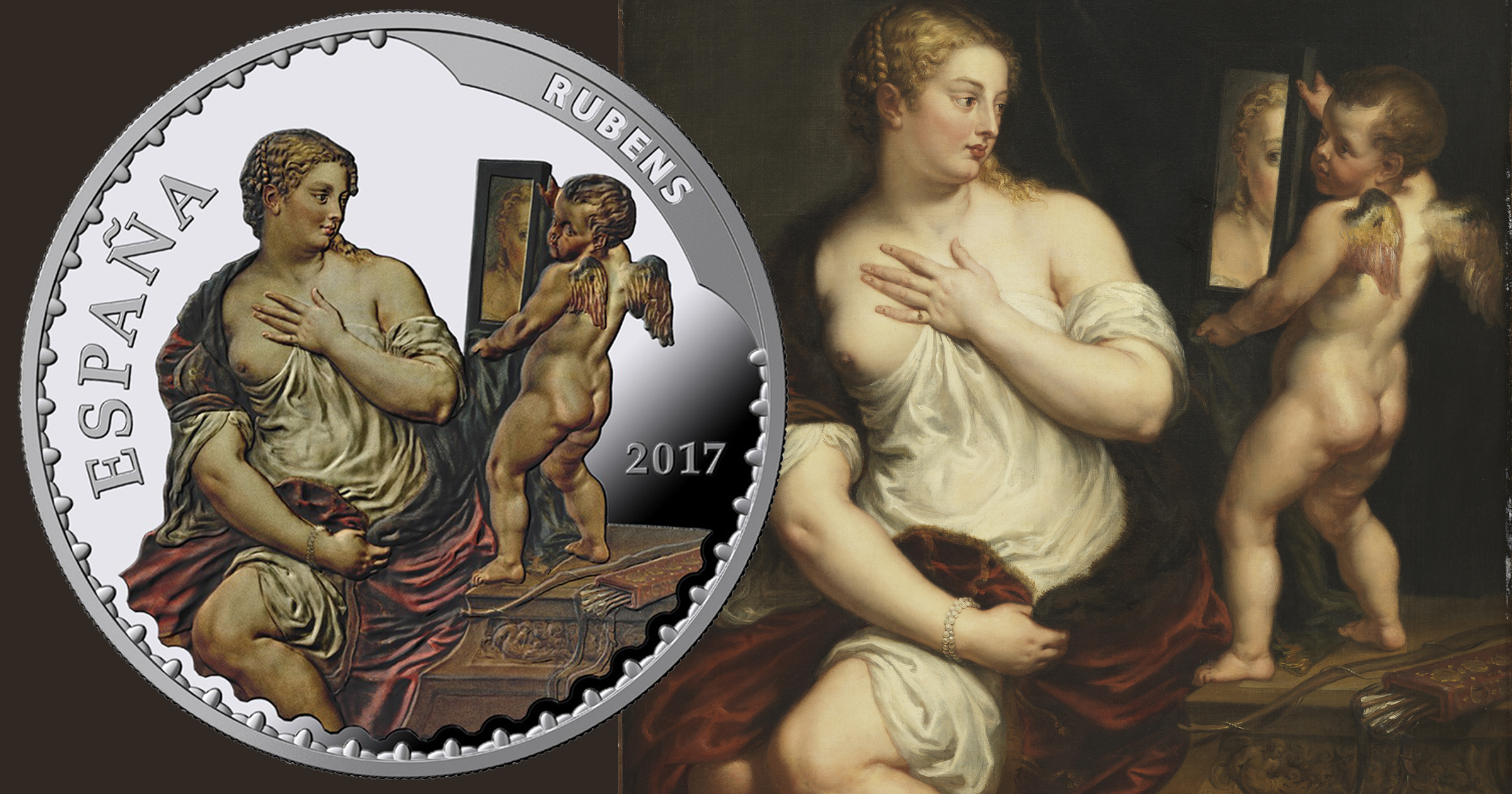 Obverse—Peter Paul Rubens, Venus and Cupid (ca. 1606–11). Rubens was the most outstanding of all Flemish painters and a leading exponent of Baroque art. His influence on 17th-century painting was enormous, due in part to his personal fame and in part to the prints which he made after his own compositions. Venus and Cupid is one of his copies of an original by Titian—now lost—which belonged to the Spanish royal collections. The Flemish painter’s subtlety of execution and superb mastery of colour are the most distinctive features of his style. Reverse—Bartolomé Esteban Murillo, The Virgin and Child with Saint Rose of Viterbo (ca. 1670). This canvas belongs to Murillo’s mature period. Its large size suggests that it was painted for an altar. It uses a classical, triangular composition of a harmonious type to depict the figures on a large scale in the foreground. The loose brushstrokes that sketchily define the forms and the emotional mood created by the gazes, gestures, and poses of the principal group make this canvas a fine example of Murillo’s work, and of its characteristic softness and delicacy that was so highly appreciated. 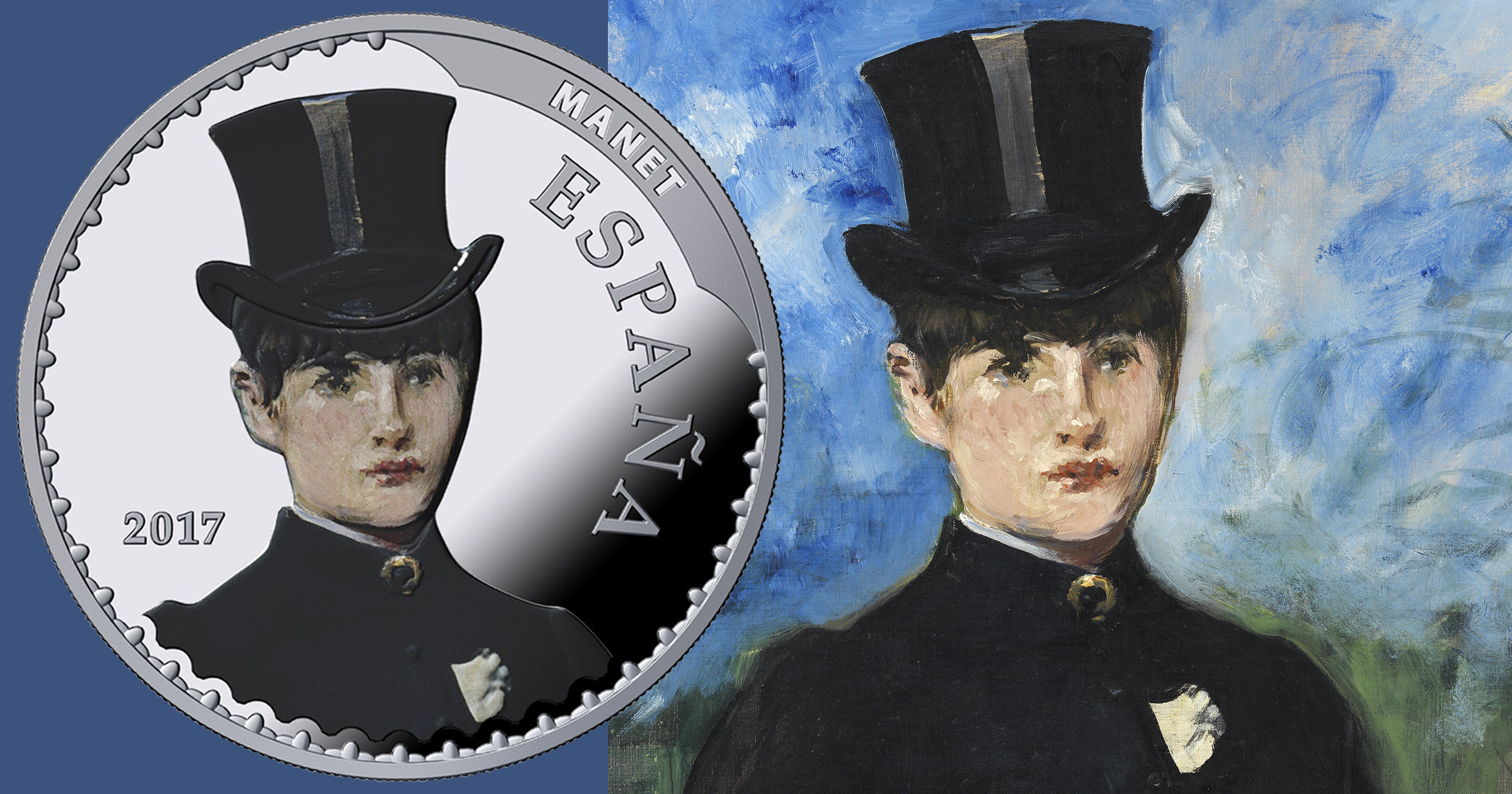 Obverse—Édouard Manet, Horsewoman, Full-Face (ca. 1882). A practitioner of realism, Édouard Manet was a pivotal figure in the renewal of French and Western painting of the late 19th century. Horsewoman, Full-Face belongs to an unfinished series on the four seasons that Édouard Manet painted in the last two years of his life. The fact that the work is unfinished clearly shows how confidently it is executed, without hesitation, and the skill with which Manet succeeded in capturing and conveying the essential. 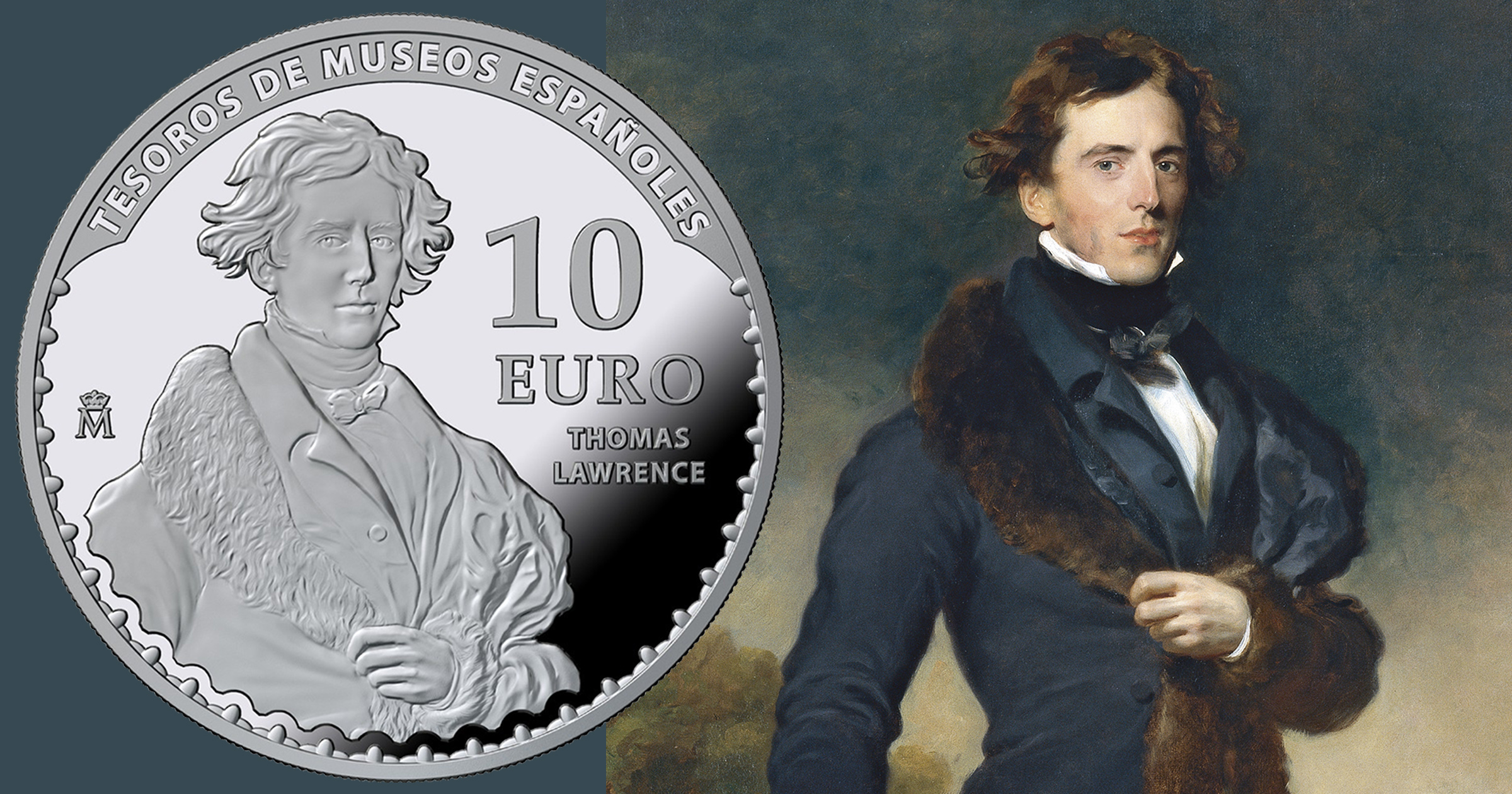 Reverse—Thomas Lawrence, Portrait of David Lyon (ca. 1825). Thomas Lawrence was the greatest English portraitist of the 19th century and an artist whose work forms a connecting link between 18th-century trends (which he absorbed and applied) and the new aesthetic of the 19th century. Portrait of David Lyon is a mature work. Lawrence locates his sitter in a spacious, tranquil, landscape setting, imbuing the image with a characteristic air of distinction and elegance as conveyed through the young man’s clothing and pose. 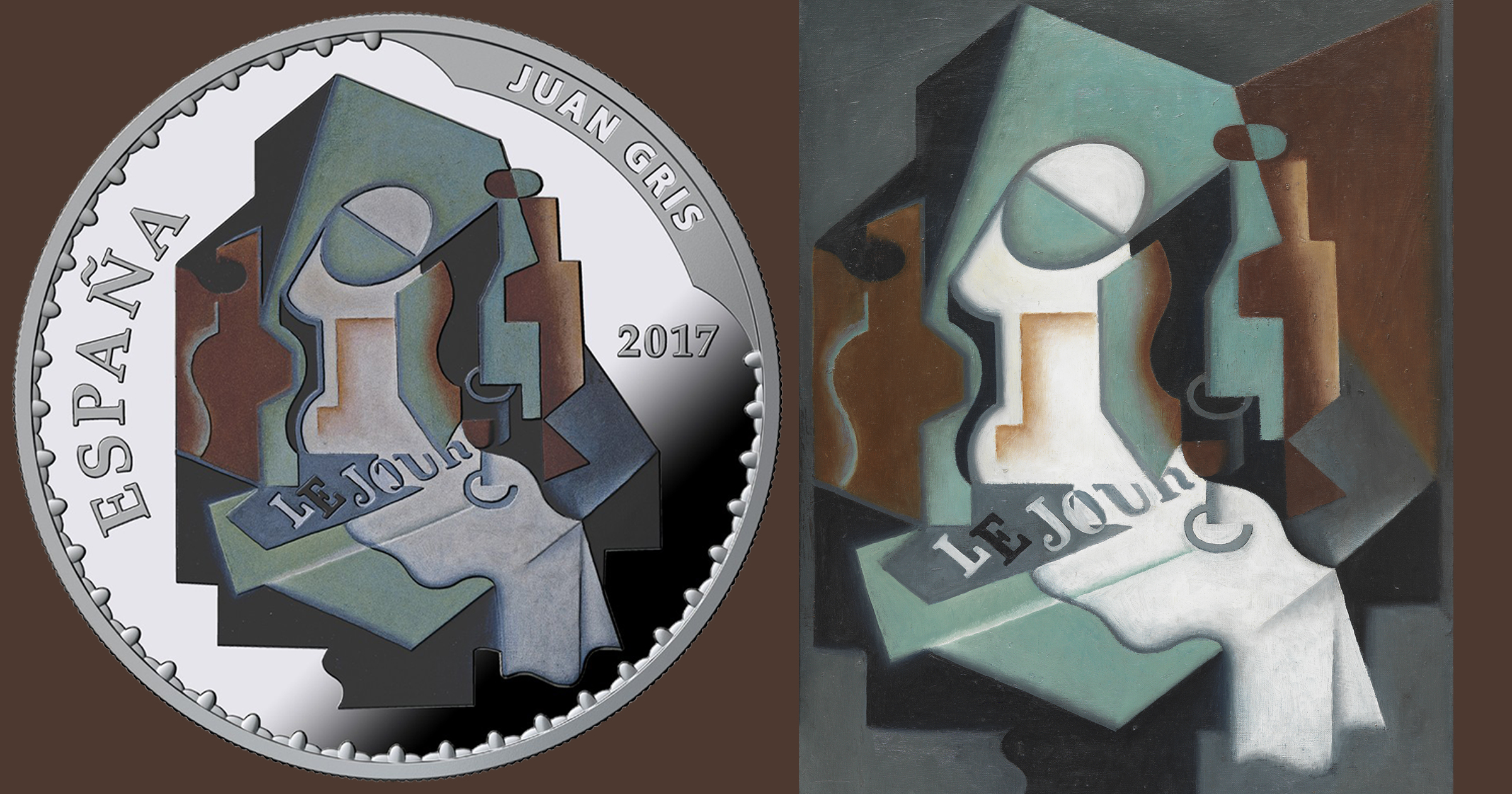 Obverse—Juan Gris, Bottle and Fruit Dish (1919). Spanish painter and sculptor Juan Gris is hailed as a major exponent of Cubism. His importance lay both in his works, chiefly portraits and still-life scenes, and in his theoretical contribution. Bottle and Fruit Dish exhibits an interplay of warm brown tones combined with colder greens and greys, taken directly from the landscape. The arrangement of the napkin that hangs over the edge of the table has an interesting significance in the context of the so-called postwar “return to order” of the avant-garde.

(Photos of paintings courtesy of the Thyssen-Bornemisza Museum.)

Reverse—Edgar Degas, Swaying Dancer (1877–79). Despite his connections with the group of Impressionists, with whom he exhibited in seven of their eight shows, Degas was to an extent an anti-Impressionist. Nevertheless, Degas shared the Impressionists’ special interest in the reality of city life; and the opera, theatre, café-concert, and horse races were constant themes in his work. In Swaying Dancer, the group of dancers is depicted in mid-performance, as viewed from an upper side box. The fleeting nature of the movements is captured with rapid pastel strokes, applied with immense skill.

The coins in this series are available from the 19th June. Each is presented individually, with certificate of authenticity. A four-coin set (consisting of all the silver pieces) and a complete five-coin set are also available. Please visit the website of the FNMT–Real Casa de la Moneda for more information on these and other coins on offer.   ❑