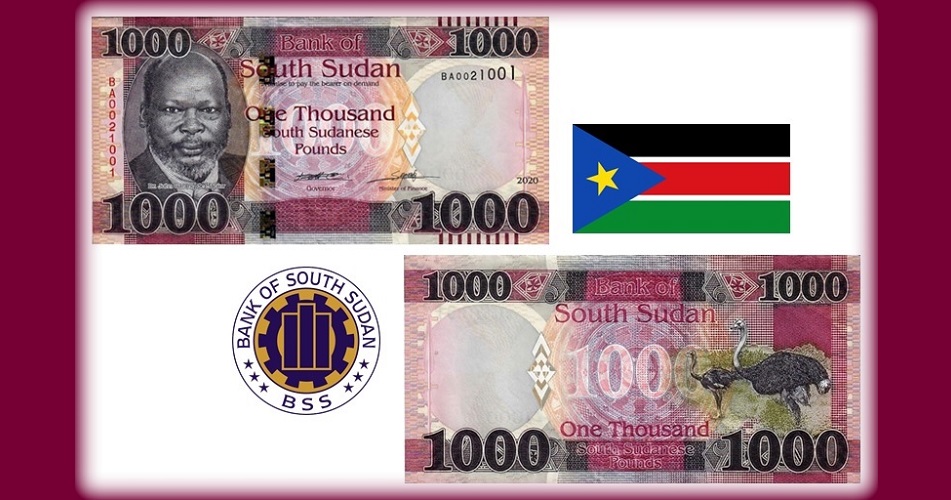 The Bank of South Sudan has issued (9th February) new 1,000-pound banknotes (U.S. $5.67) into circulation. The new notes are now the largest denominations in use. The higher values are introduced in an effort to alleviate the need for large amounts of smaller denominated banknotes for transactions and to facilitate easier cash use.

The new banknotes were introduced during a press conference in the country’s capital of Juba by the Honourable Dier Tong Ngor, governor of the Bank of South Sudan, on the 4th February 2021. He outlined that the past few years have been characterised by high inflation. Currently, at almost 500% annually, the South Sudanese currency’s perpetual depreciation has eroded smaller denominated banknotes’ face value. South Sudan’s beleaguered economy, of which 98% of revenue depends on oil exports, has suffered due to civil unrest which has disrupted Africa’s newest nation since December 2013, resulting in most oilfields in the country’s oil-rich northern region having to shut down. As a result, the value of the currency has plummeted since its introduction 10 years ago. South Sudan won its independence from Sudan and the government in Khartoum in July 2011 after more than 20 years of conflict; the currency was placed into circulation the next month. Banknotes from 5 to 500-pound denominations have intermittently circulated since that time, coins of smaller values were released in 2015 and 2016. 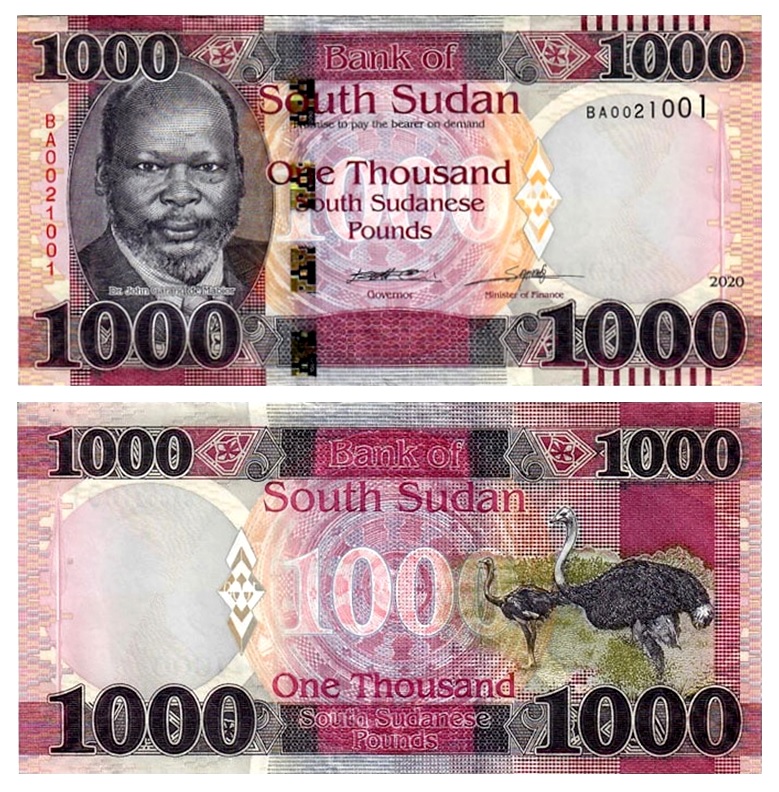 The new banknote, which is dated 2020 and red-fuscia in colour with a charcoal grey portrait, is part of the current design which includes a front-facing portrait of the country’s national hero, Dr. John Garang de Mabior (1945–2005), a Sudanese politician and revolutionary leader. The back side depicts a common ostrich – the design was last seen on the reverse side of five-piastre banknotes introduced in 2011 and depicted in reverse layout.

Watermark — A replicated image of Garang de Maribor is seen when the note is held up to a light source and is located on the right half.

Holographic strip — Located towards the centre-left on the face, the segmented strip refracts images of the denomination when tilted under a source of light.

Latent imaging — The numeral 1000 is visible in the lower half on the face side when the note is tilted.

Tactile application — A series of nine vertical lines placed on the face side on the top and bottom edge near the right corners are applied to aid visually impaired persons to identify the note.

For additional information about this and other banknotes of South Sudan, please visit their website.