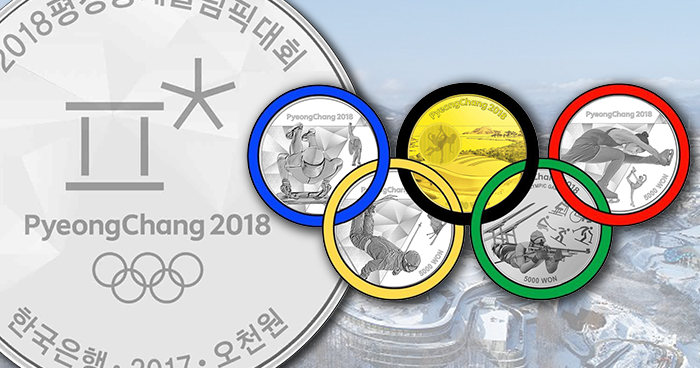 The Bank of Korea have unveiled (2nd June) their second series of coins which will be issued in accordance with the 2018 Winter Olympics and Paralympics to be hosted in the city of Pyeongchang. A total of 12 coins—two gold, eight silver, and two brass—comprise the set, which highlights the international sporting event to be hosted in South Korea. The 2017-dated coins are produced by the Korea Minting and Security Printing Corporation (KOMSCO) on behalf of the Bank of Korea in the following denominations. 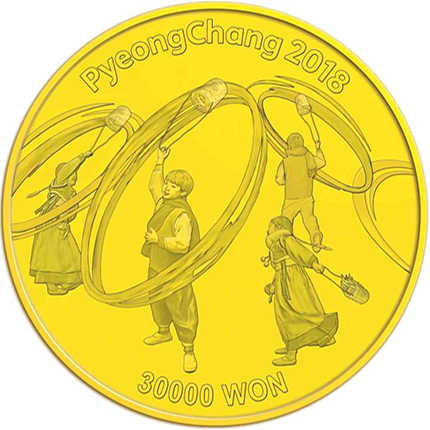 30,000-won gold coin. The obverse depicts jwibulnori, a traditional Korean game of fireplay which takes place in the rice paddies and fields to exterminate harmful insects to the harvest during the first full moon of the Lunar New Year. The text PyeongChang 2018 appears above the design, with the denomination of 30000 WON below. 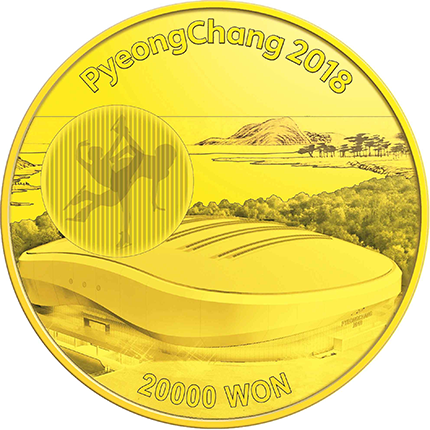 20,000-won gold coin. The image depicted is that of the Gangneung Ice Arena, an indoor arena which has been built for the 2018 Winter Olympics and where the figure-skating and short-track speed-skating games will be held. The arena is located in Gangneung adjacent to Gyeongpo Lake, also depicted on the design and located in the eastern coastal area of Gangwon Province (where the proposed “Coastal Cluster” of Pyeongchang 2018’s venues would be located). A latent image of a figure-skating and short-track speed-skating sequence is seen above and to the left of the stadium. 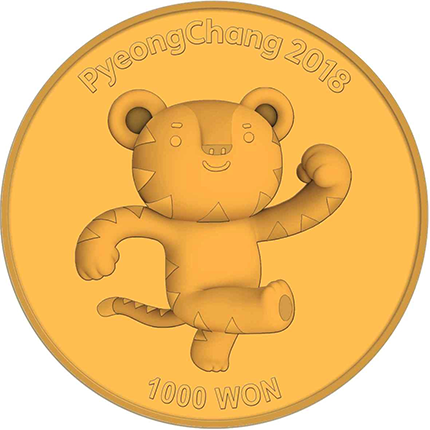 1,000-won brass coin. The obverse features an image of Soohorang, a white tiger and the official mascot of the Olympic Winter Games, Pyeongchang 2018. 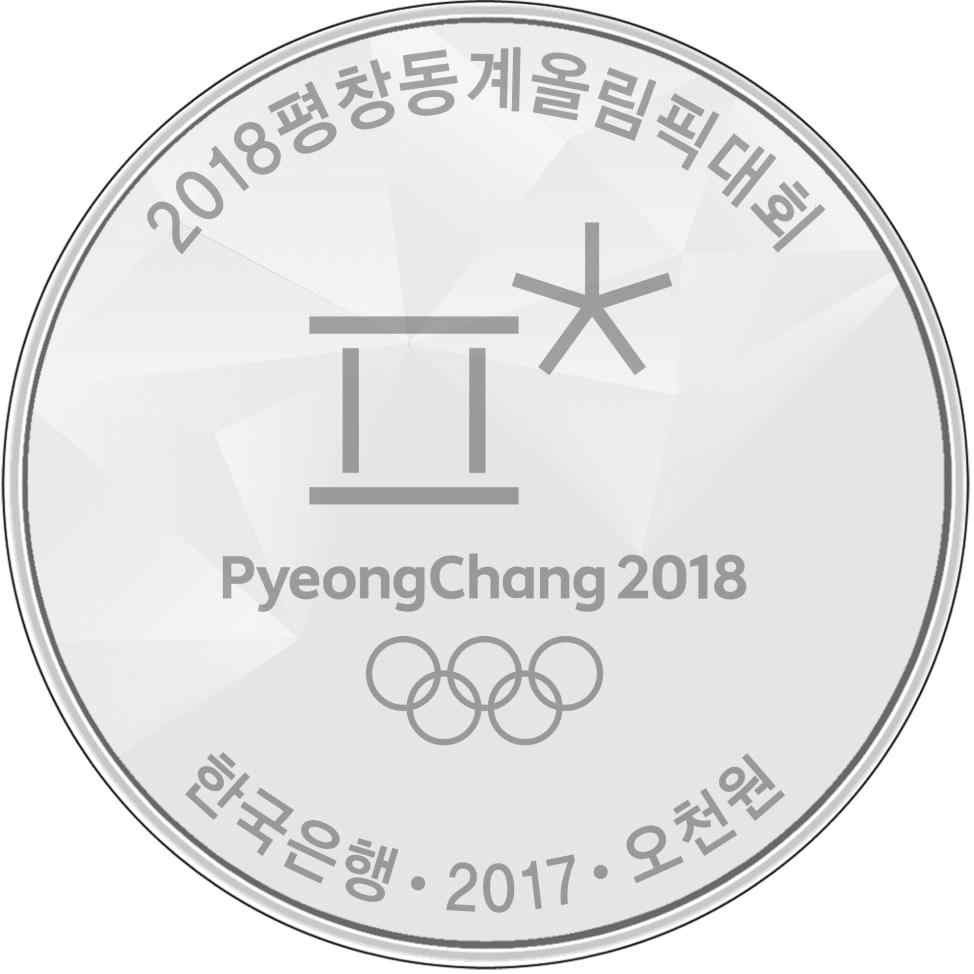 All Pyeong Chang Winter Olympic coins in this series share the same reverse design consisting of the Olympic Games insignia (centred). The Korean script text 2018평창동계올림픽대회 (2018 Pyeongchang Winter Olympic Games) is placed above the insignia, with 한국은행 (The Bank of Korea), the issue-year 2017, and the relevant denomination 삼만원 (20,000 won), 이만원 (10,000 won), 오천원 (5,000 won), or 천원 (1,000 won) placed below the insignia. 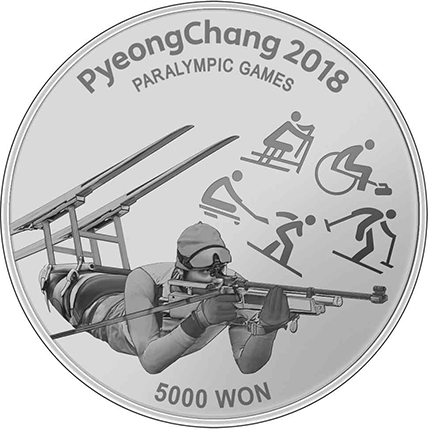 5,000-won silver Paralympic coin. The image depicts the Para-biathlon, one of the six Paralympic Winter Games disciplines, as the main design, with the remaining five disciplines represented in pictograms and placed to the upper right of the primary design. 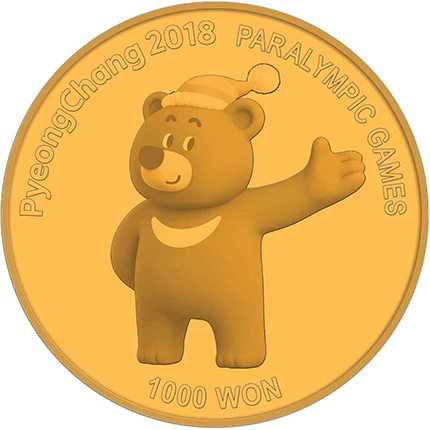 1-000-won brass Paralympic coin. The obverse features an image of Bandabi, an Asiatic black bear and the official mascot of the Paralympic Winter Games, Pyeongchang 2018. 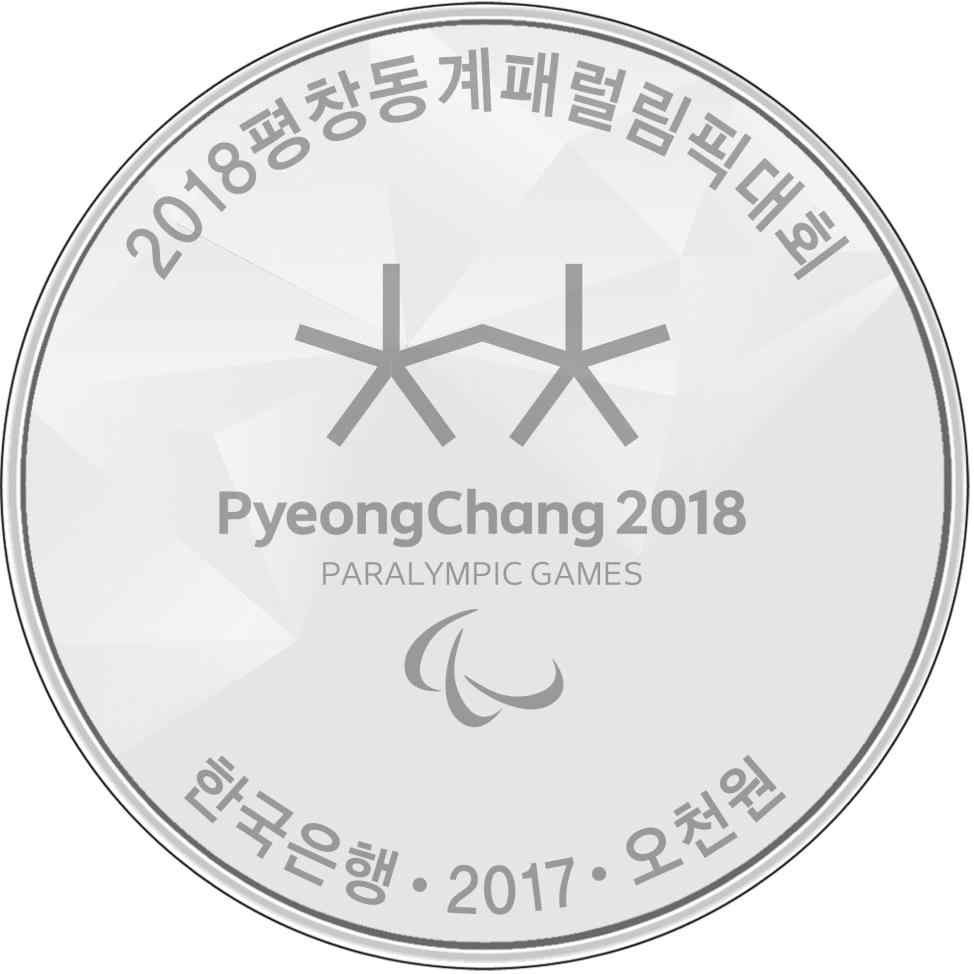 The first set of commemorative coins, consisting of 11 designs and variations, was previously issued on the 18th November 2016. The Bank of Korea will issue commemorative coins for the Olympic Winter Games Pyeongchang 2018 (second set) and for the Paralympic Winter Games Pyeongchang 2018 from the 1st November 2017, in order to support these events and make them more widely known at home and abroad. A maximum mintage of 359,500 coins in total is being produced and issued across a variation of metals and denominations and between the Winter Olympic and Paralympic games. The Bank of Korea have announced they plan to issue coins up to the maximum issuance volume as requested by the Organizing Committee, taking into account demand and other factors. The Organizing Committee will then acquire all the coins so that it can sell them in Korea and overseas via official international distributors.   ❑