The species is easily distinguished from other porpoises by a characteristic dark ring around the eyes which is commonly surrounded by a further light ring giving the indication of spectacles – hence, the animals’ very descriptive name.  The Spectacled Porpoise has distinctive black and white markings – black above and white underneath – with a white stripe on the upper surface of the tail.  They are fast, active swimmers and normally avoid boats, which is why so little is known about this particular species. The total population is also unknown and therefore they are listed as a Threatened Species. 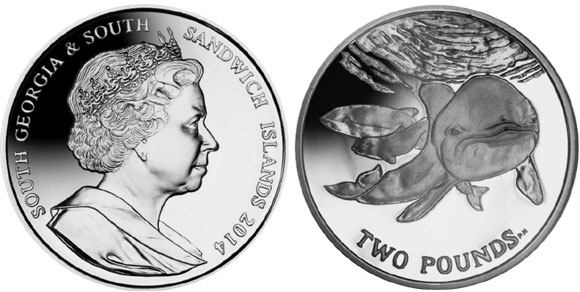 The coin, struck by the Pobjoy Mint, UK, is issued in both sterling silver and cupro-nickel and share the same design. The reverse features a beautiful Spectacled Porpoise in the foreground with a mother and her calf in the background. The coin’s face value of “TWO POUNDS” is placed just under the primary design along the lower rim. The obverse of the coin features an effigy of Her Majesty Queen Elizabeth II by Ian Rank-Broadley FRBS.

Each silver proof example is packaged in a custom presentation box with certificate of authenticity.

For more information on these and other coins offered by the Government of South Georgia & South Sandwich Islands, please visit the website of the Pobjoy Mint at: http://www.pobjoy.com/ukworld/section.php/815/0 Information offered in English – international orders dispatched.