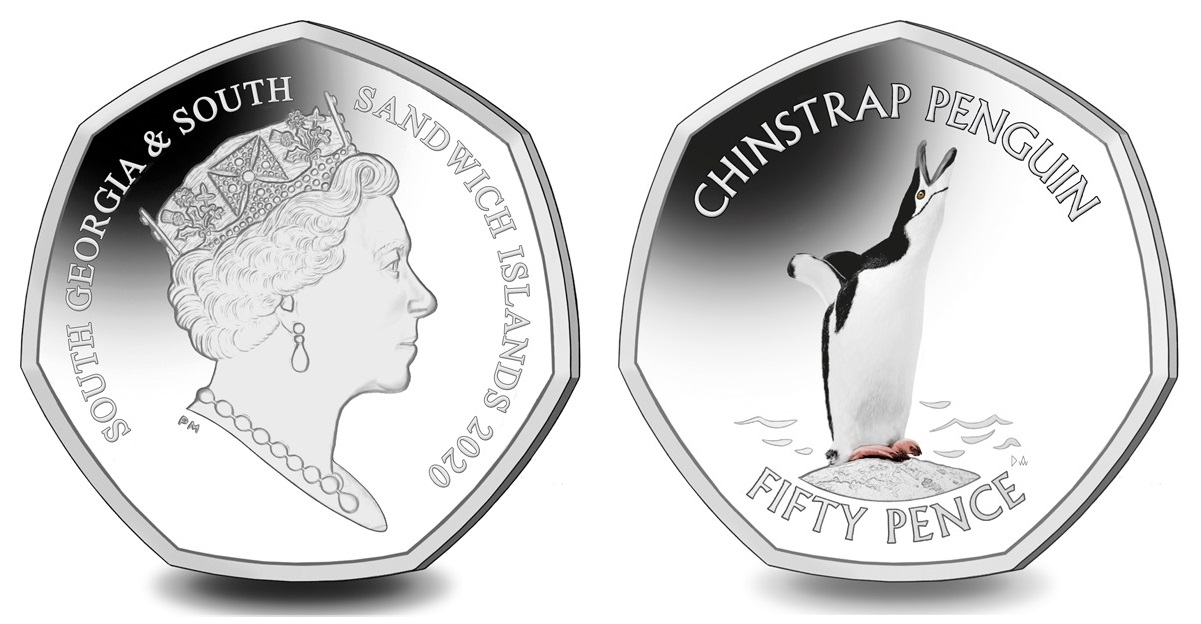 The government and treasury of South Georgia and the South Sandwich Islands have launched (26th May) their first-ever numismatic series with a familiar and popular theme. As South Georgia and the South Sandwich Islands are situated about halfway between the southeast coast of Argentina and the Antarctic continent, these islands are often referred to as an Antarctic oasis, or “the Galapagos of the poles,” because of the vast numbers of penguins that breed there. The penguin is often regarded as the emblem of Antarctica, as penguins are the most common birds in the Antarctic. Coins from the Falkland Islands, which also carried depictions of the regions’ most prolific bird species, have become widely collected and sought after.

Penguins live in such vast quantities that a population of some colonies can be larger than some cities, with the total number of breeding pairs in the Antarctic region estimated to be 20 million. Depicted on the first in the new series is the chinstrap penguin, often referred to as “stonebreaker penguins” due to their screech being so piercing that it could break stones. Chinstrap penguins can easily swim as far as 80 kilometres (50 miles) offshore every day to forage, and, like other penguins, their tightly-packed feathers make them waterproof. Together, with their waterproof feathers, they have a thick wall of blubber and blood supply in their extremities which restricts and redirects heat to essential organs. Chinstraps can dive as deep as 70 metres (230 feet), but usually, their dives, which are relatively shallow, last less than a minute or so compared to some other species of penguin. Chinstrap penguins are sometimes referred to as “stonebreakers” due to their loud, harsh call which is often heard (and in huge numbers) during the mating season, to both attract a mate and to fend off rivals. 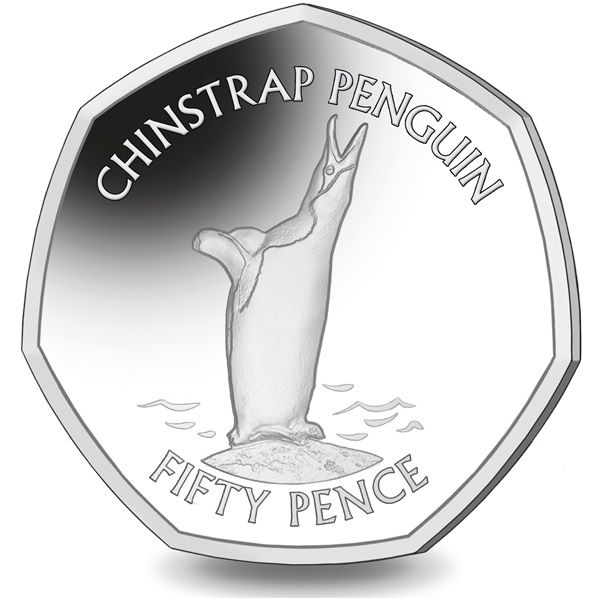 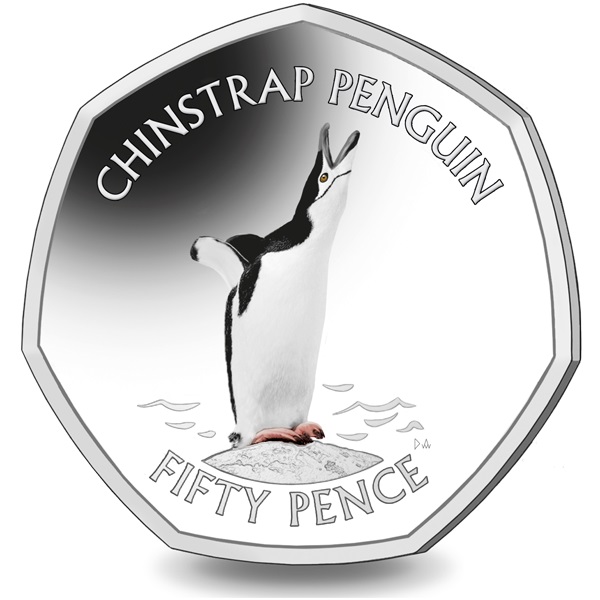 The seven-sided coins are produced by the Pobjoy Mint UK, at their facilities in Surrey, on behalf of the treasury of South Georgia and the South Sandwich Islands. The design on the reverse side of the coins features a male Chinstrap penguin in the posture taken to deliver one of those famous stone-breaking screeches. 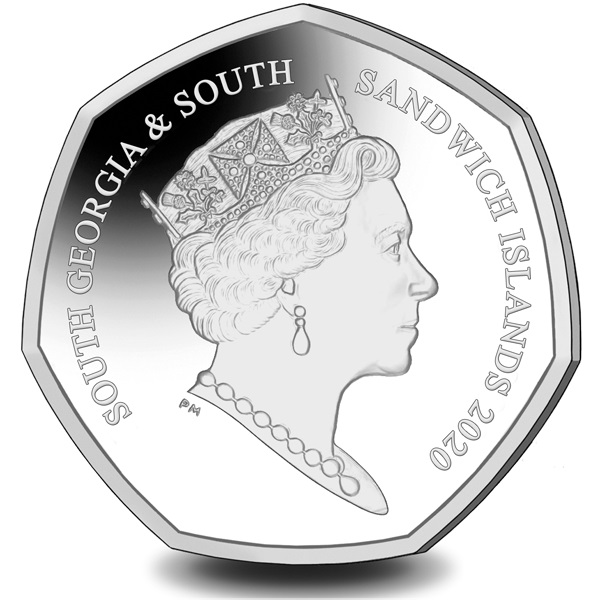 The obverse side depicts an effigy of HM Queen Elizabeth II, which is an exclusive design of the Pobjoy Mint. The legend around the Queen’s likeness denotes the issuing authority and year of issue. 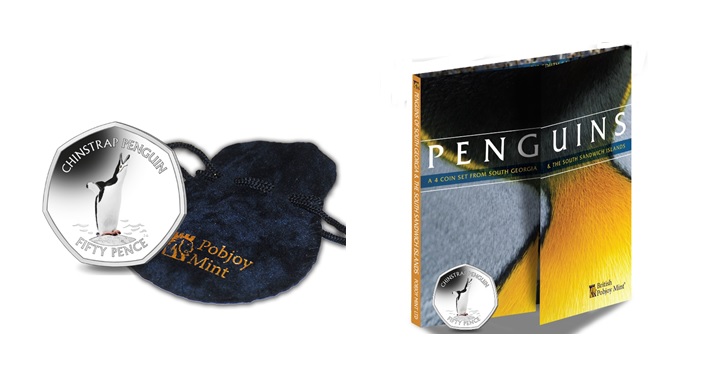 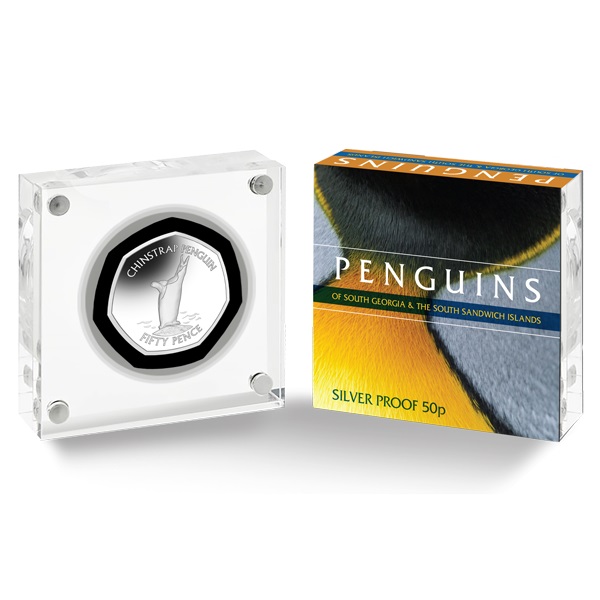 The sterling silver coins are presented in a lucite or Perspex square container, allowing for the easy viewing of both sides of the coin. Other coins in the series will include the Gentoo, Macaroni, and King penguins later this year. For additional information about these coins and others issued by the treasury of South Georgia and the South Sandwich Islands, please visit the website of the Pobjoy Mint.

Orders will be dispatched from the 15th June.