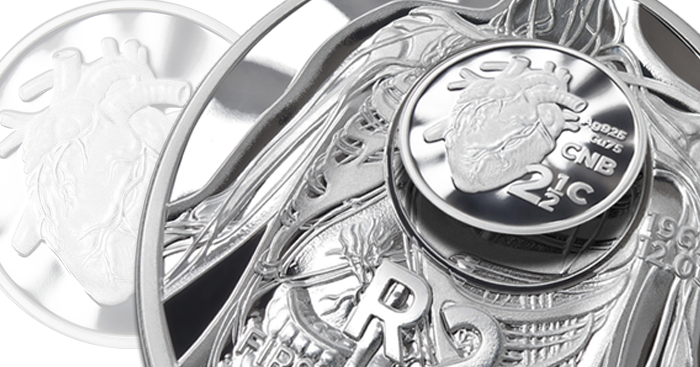 The South African Mint has issued a silver coin commemorating the 50th anniversary of a medical miracle that astonished the world in 1967—the world’s first heart transplant, which took place in Cape Town, South Africa. The extraordinary surgery is celebrated on a unique pair of coins: a 2-Rand silver coin and a smaller, 2-1/2-cent “Tickey.” The two coins actually fit together to allow the viewer to imagine the transplant. The small silver Tickey coin, depicting the good heart, appears on top of the larger coin depicting the torso and, within it, the poor heart.

The very complex and correct anatomical detail of the two reverse designs was provided by South African Mint designer Richard Stone and renowned artist Carl Jeppe. (Jeppe is a well-respected artist and lecturer of figure drawing at the Technikon School of Fine Arts, in Pretoria. He was also Richard Stone’s drawing lecturer in the mid 1990’s). The engraver was Paul Botes of the South African Mint, who worked closely with the designers to ensure that the precise details were exactly transferred to the master tooling. 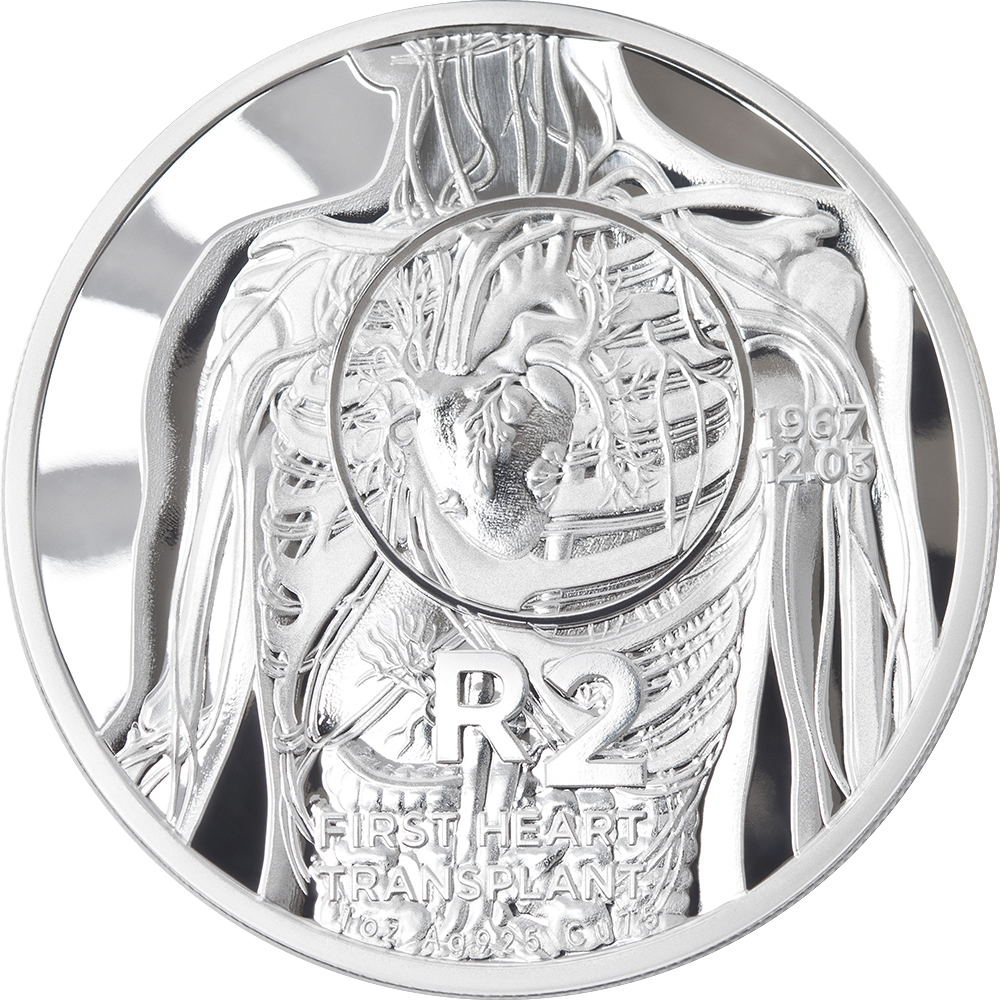 (Hover over coin images to zoom.)

The reverse of the larger, 2-Rand coin depicts in great detail the skeleton, epidermis, veins, and organs of the torso area of the human body. Even the complex of veins and arteries weaving their way into and out of the heart can be seen, as well as the web of blood vessels connecting it to the liver. Also visible are the detailed texture of the outer wall of the heart and the puffy, pillow-like tubing of the large and small intestines. The diseased heart shows fat deposits, dying muscle, and an area of blocked blood flow, as noted in the central area where the frosted and polished surface seems darker. A raised circle indicates the position of the heart, as well as serving as the placeholder for the small Tickey and the imagined cavity of the human chest. To the right, in two lines, is the date 1967 / 12.03 (December 3, 1967) when this highly specialized surgery was performed. The face value, R2 (or 2 Rand), and the words FIRST HEART / TRANSPLANT (in two lines) are superimposed over the lower half of the torso. 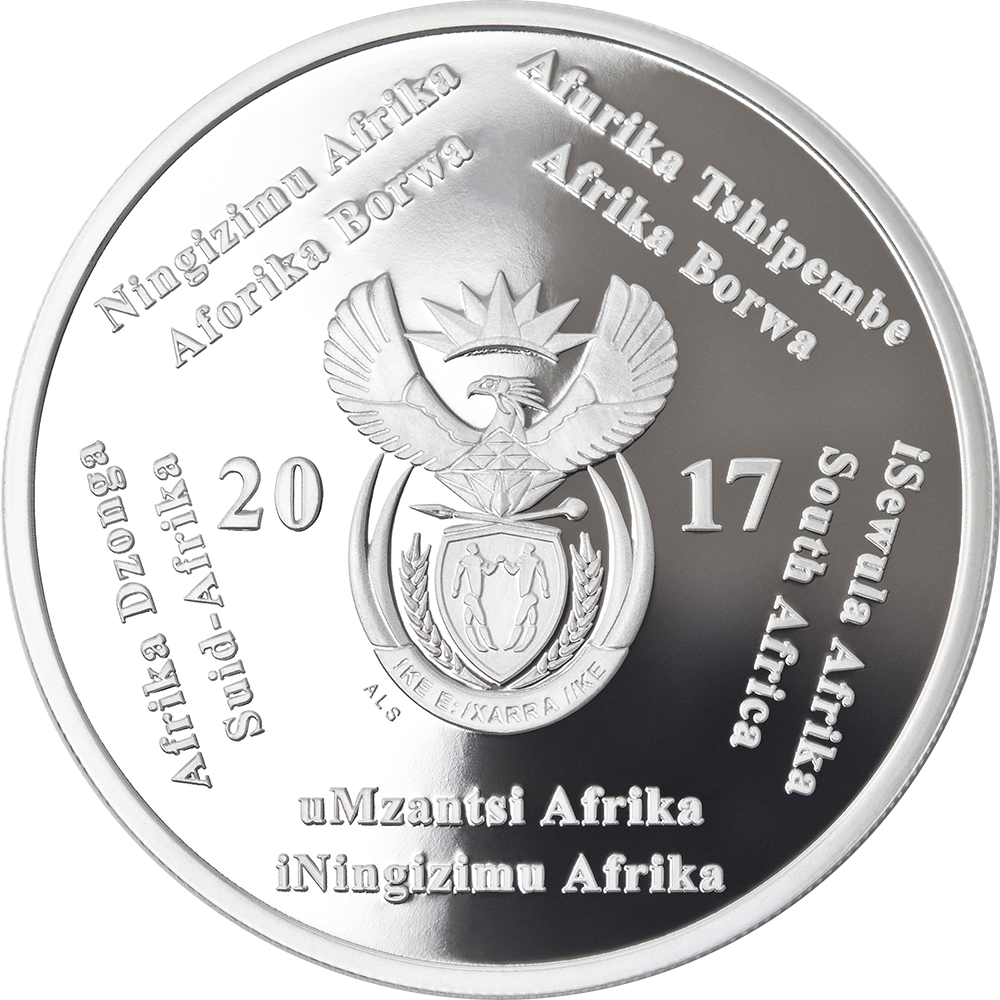 The obverse of the 2-Rand coin was developed by Arthur Sutherland in the year 2000. (Mr. Sutherland was the master engraver of the mint until his retirement in 2002.) The design centers the standard coat of arms of the Republic of South Africa in frosted relief on a mirrored field, flanked on either side by the first two and last two digits in the year of issue, 2017. Surrounding the coat of arms in a pentagon formation are 10 phrases (two phrases for each side of the pentagon): the name of South Africa in each of the country’s 11 official languages (with a single instance representing both the Ndebele and the Zulu languages, which spell the name identically). 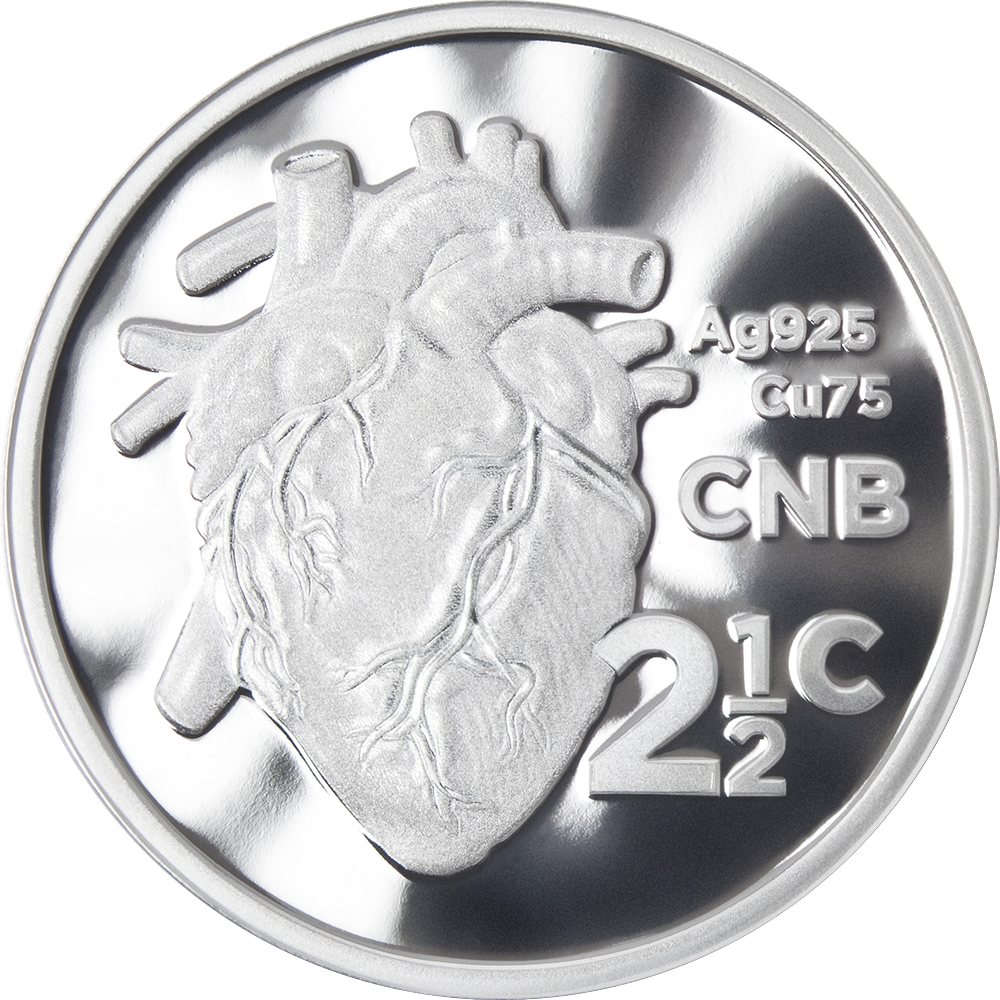 The reverse of the smaller, 2-1/2-cent Tickey depicts—again in minute detail—a healthy heart, with the thick, healthy aorta coming out of the top, the many blood vessels, and the texture of the heart wall. The frosted finish of the healthy heart, produced in relief against a mirrored field, emphasizes the organ’s good health. At lower right on the mirrored field, also in relief, is the face value of 2-1/2 cents, depicted with a stacked fraction and a superscript letter C for “cents.” The metallic composition appears in two lines in the upper right field as Ag925 and Cu75 (92.5% silver, 7.5% copper), with the initials CNB (representing the chief surgeon of this miracle, Dr. Christian Neethling Barnard) below. 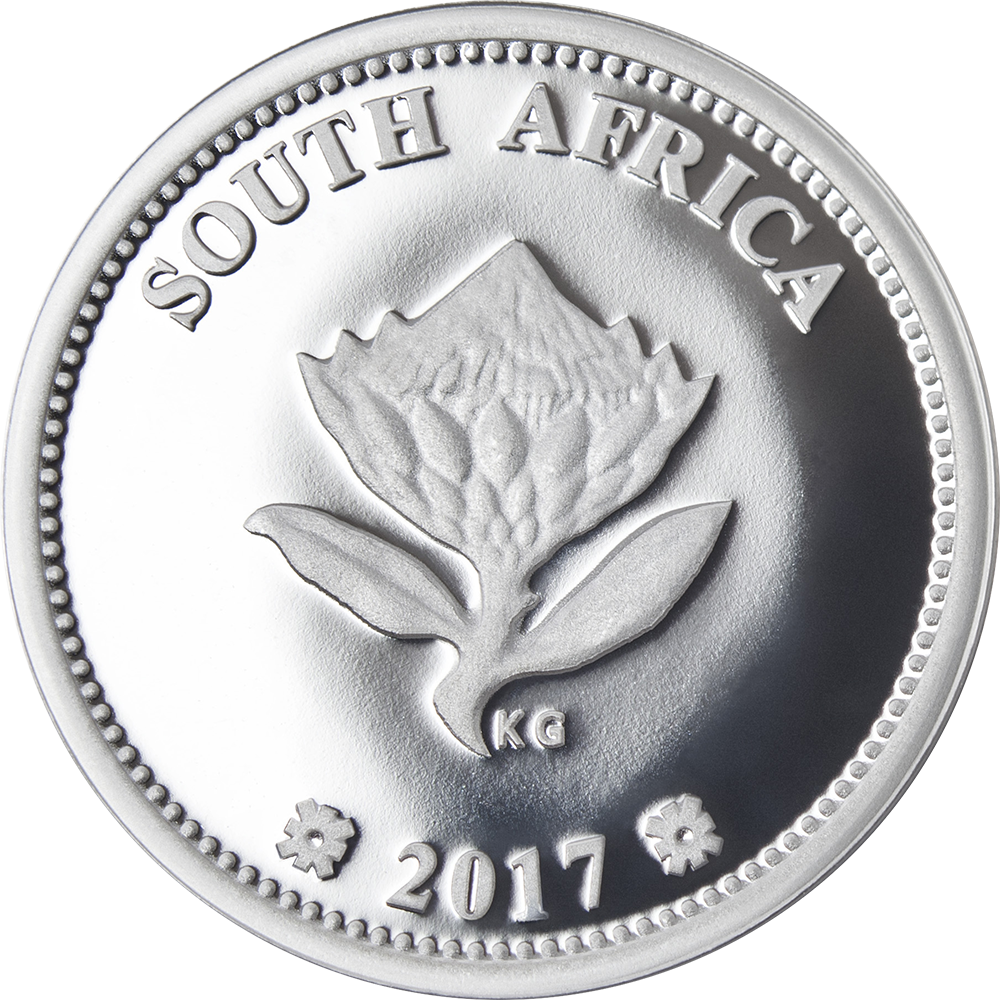 The 2-1/2-cent obverse design was developed and engraved by Kruger Gray and first appeared in circulation in 1922. The central device is the standard depiction of the King Protea, South Africa’s national flower, in frosted relief on a mirrored field, with SOUTH AFRICA above and the designer’s initials, KG, to the right of the base of the stem. The year of issue, 2017, is set between two floral ornaments below the flower. The field is surrounded by a beaded border within a plain, raised rim.

The “World’s First Heart Transplant” twinned silver coins will be available through APMEX and GovMint. One thousand of each mintage will be available for individual purchase, while 700 of each will be reserved for two-coin sets. These sets will be housed in an elegant, hand-crafted wooden box made of walnut with a glossy, piano-finish varnish. Only 700 of these elegant wooden cases with the pair of coins will be made available.   ❑

Edited 6/5/17 to add the diameters of the two coins as provided by the SAM.