The release of the 2010 America the Beautiful 5-ounce silver coins is the hottest issue in the modern U.S. coin segment of the market. For example, it dominates coin discussion forums, numismatic web sites, and letters to the editor of major coin publications. Not surprisingly, the release of these coins raises some important issues for the coin industry and the collecting community.

The controversies surrounding the release of these coins have negatively affected public perceptions of the U.S. Mint, Authorized Purchasers (AP’s) who distribute bullion products for the Mint, and coin dealers in general.   The Mint has been repeatedly criticized for not distributing the coins directly to the public, even though it lacks the legal authority to do so, and many collectors believe that high pre-order premiums initially charged by one AP is what started the whole mess. Others are suspicious about how secondary market dealers have obtained so many sets since they are supposed to be sold directly to the public. 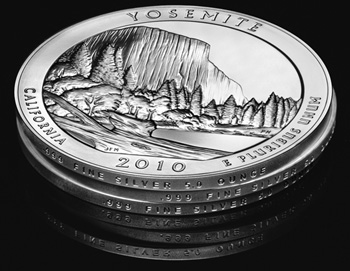 Meanwhile, collectors continue to try to obtain the coins from nine AP’s, most of which have suspended sales until they can implement a retail distribution system for the coins. Those which have already offered coins for sale quickly sold out of most of their allocation, and orders were very hard to place because of overloaded phone lines and web sites and an avalanche of mail orders.

The Mint has yet to announce when sales of the numismatic version of these coins will begin other than stating that it will be in the first quarter of 2011. With so many collectors having difficulty obtaining the bullion coins from the AP’s, Mint officials may be able to limit some of the damage to the Mint’s public image by providing a release date for the numismatic versions as soon as possible.

[Editor’s note: The US Mint provided the following response to a recent inquiry: “No release date has yet been set. We are working to develop a plan ensuring the widest and fairest distribution of the coins. We will provide more specific information as details become available.”]

The low mintage of these coins, the fact that they are first year of issue coins which always command substantial interest, and all the problems in obtaining them have driven interest in them through the roof. On the secondary market, raw sets are fetching $2500 or more, sets graded with the designation “Choice BU” or “Gem BU” are bringing close to $3,000, and numbered graded sets (MS-68 and 69) are selling for $4-5,000 and more. In addition, the grading services are reporting that so far no 70’s have been found, and that many of the coins have bag marks and other quality problems. As a result, some dealers are speculating that a graded 70 set could be worth tens of thousands of dollars, if one is ever discovered.

In my view, these coins are an excellent way to add silver to one’s portfolio, depending on the price paid. If one can obtain them at the price AP’s are required to charge (which averages about $950 for the 5-coin set), one is purchasing the coins for a premium over melt that is comparable to that for American silver eagles, which are produced in the tens of millions. It’s hard to predict future prices, particularly since the numismatic version will have a lower mintage (27,000). But at $950 a set, I see little downside, especially if silver prices continue to increase at a fast clip, as most metals experts predict. 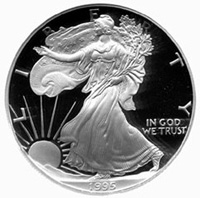 Some have predicted that secondary market prices will fall dramatically in the future because current prices, in their view, are driven by collectors and speculators who are “flipping” their sets for quick profits. But my discussions with fellow collectors and investors lead me to believe that many of them will hold on to their sets because they plan to collect the whole series, or because they feel the coins will increase even more in value later. Many have compared these coins to the 1995-W silver eagle, which has a comparable mintage of 30,125 and today sells for about $3,000.  In 1995 collectors were only able to obtain the West Point-mint marked coin if they purchased a gold coin set which many felt they could not afford.  The coin became the key to the silver eagle series.

In addition, because the recent coin modernization legislation (Public Law 111-302) allows for future coins to be between 2 ½ and 3 inches in diameter, there was speculation that these might be the only 3-inch 5-ounce coins the Mint would produce. However, the Mint recently announced that despite having this authority, it would be too expensive to change formats at this point, and that doing so would result in further delays in the program. The decision to retain the same format in the future is good for series continuity, which should help attract future collectors to these coins.

For the past month, collectors and investors eager to obtain the new coins have repeatedly called AP’s and checked their web sites for information. In most cases, the AP’s have continued to post messages asking the public not to call and to wait for more information. Rumors began to spread last month that some AP’s were violating the new terms from the Mint, and that the real reason for the delays is that the AP’s were seeking to obtain exceptions to those rules to allow them to develop a wholesale market for the coins rather than sell them all retail.

One AP is rumored to have sold a large quantity to a dealer, but there has been no confirmation of this information. There may be no truth to those allegations, and the dealers selling the coins may well have obtained all their sets from the public, but rumors continue to swirl and many collectors are outraged by the whole affair. Some people have said they will never again deal with the Mint, or APMEX, because of their views on how they handled the release of these coins.

Those who criticize the Mint for not distributing the coins to the public seem not to understand that the Congress requires bullion coins to be distributed through the AP network. However, since the unexpectedly low mintage (33,000 sets rather than 100,000 as proposed) created an instant rarity, it obviously would have been preferable to have the Mint sell them directly to the public to allow for a fairer and wider distribution of the coins. But for that to happen the laws need to change. It may well be time for the Mint to work with the Congress to develop a better distribution system, possibly by ending the AP network and allowing for direct distribution of bullion products. At a minimum, the Mint should be given the authority to sell to the public any bullion items made in such small numbers that they are actually numismatic products.