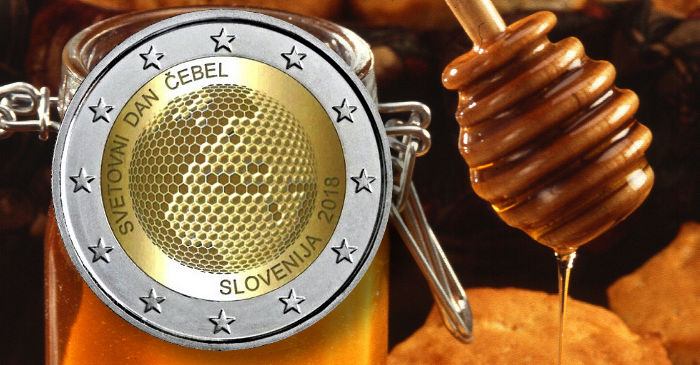 The Banka Slovenije has issued (14th May) new two-euro commemorative coins which are minted in celebration of the first-ever World Bee Day. The day seeks to focus on the great importance of the many bee species to the environment and the food chain.

Over recent years, the populations of bee species and colonies have decreased significantly and scientists believe that this has been due to various pesticides and an increase in the populations of other animals who feed on bees. The problem has become acute in many parts of the world where the production of honey has also seen a very noticeable decrease in quality and quantity. Countries who especially rely on the revenue of exporting the golden nectar have brought the decrease in bee populations to the forefront of ecological concerns.

Slovenia is the only member state of the European Union to have a protected native sub-species of bee known as the Carniolan honey bee, or Apis mellifera carnica, which means that no other breeds of bee may be raised in Slovenia. Given the increasing threat to bees, by marking a special day devoted to bees, we can make a major contribution to raising public awareness about the importance of protecting bees and of the role of the beekeeping sector in agriculture.

May 20th will mark the first-ever observations of World Bee Day at Slovenia’s initiative when their proposal was presented last December to the United Nations General Assembly. Slovenia outlined the great importance of beekeeping in Slovenia, and in order to raise awareness internationally about the importance of bees and other pollinators and their products, the Slovenian Beekeeping Association, supported by the Republic of Slovenia, submitted an initiative to the United Nations. The suggested day of the 20th May also coincides with the birthday anniversary of Anton Janša (1734–1773), the 18th-century Slovenian beekeeper and pioneer of all apiarists, whose studies, techniques, and modern methods of bee-keeping survive today.

The coin is produced by the Istituto Poligrafico e Zecca dello Stato (IPZS) at their facilities in Rome, Italy, on behalf of the Banka Slovenije, and is designed by artist Janez Bizjak. The obverse includes a representation of the Earth as a honeycomb. The empty honeycomb cells represent the sea, while the land is depicted by the filled-in honeycomb cells.

A total of one million coins will be produced commemorating the first ever World Bee Day, of which, 2,000 pieces will be struck to Proof quality. Details about purchasing commemorative coins from abroad and locally from the Bank of Slovenia can be found by visiting its website.