The National Bank of Slovakia have issued a new coin which features the primeval beech forests of the Carpathians, one of the country’s natural attractions which are a cross-border habitat and also included in UNESCO’s World Heritage List.

The Carpathian primeval beech forests are a chain of enclaves of undisturbed forests and primeval forests constituting a beech gene bank of global importance. The forests themselves are comprised of ten separate sites: four in Slovakia and six in Ukraine. Those in Slovakia are the forest of Vihorlat, located in the Vihorlat Protected Landscape Area, and the forests of Havešová, Rožok, and Stužica, in the Poloniny National Park. Some tree specimens have exceptionally thick trunks and the tallest stand at around 58 meters, a world record for beech trees. Their entry in the UNESCO World Heritage List was approved on the 28th June 2007 by the World Heritage Committee. In 2011 five other sites in Germany were included in the entry, which was then named the Primeval Beech Forests of the Carpathians and the Ancient Beech Forests of Germany. 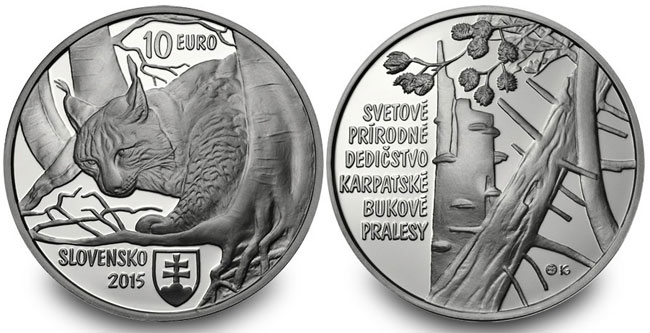 The coin, produced by the Kremnica Mint on behalf of the National Bank is designed by Karol Ličko. The obverse side of the coin depicts a Eurasian lynx in the setting of a primeval beech forest. At the bottom is the coat of arms of the Slovak Republic and to the left of it is the name of the country “SLOVENSKO” (Slovakia) above the year 2015. The denomination 10 EURO appears at the top.

The reverse side shows dead trunks of European beech and silver fir trees, juxtaposed with another beech tree that has leaves and is bearing nuts. On the left side is the inscription SVETOVÉ PRÍRODNÉ DEDIČSTVO and KARPATSKÉ BUKOVÉ PRALESY. To the lower right is the mint mark of the Kremnica Mint and the stylized letters KL, the initials of the designer. The coin’s edge carries the inscription “─ WORLD HERITAGE ─ PATRIMOINE MONDIAL“

The coin is available directly from the Kremnica Mint in both BU and Proof strikes, for more information on these and other coins offered by the National Bank of Slovakia, please visit the website of the Kremnica Mint at: http://www.mint.sk/nakup_novinky.php?lang=en Information available in English, German and Slovakian, international orders dispatched.