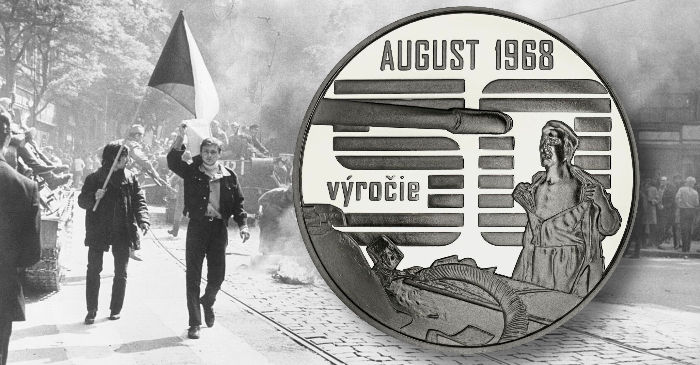 The National Bank of Slovakia has issued (9th August) new commemorative coins which are minted in remembrance of one of former Czechoslovakia’s most pivotal events in their history as a modern nation — the time when Czechoslovaks attempted to reclaim their own nation from Soviet influence. The events of August 1968 were eerily similar to the historical changes which occurred in 1990 with the collapse of the communist government and the emergence of parliamentary elections. The exception being that with the sweeping winds of change, the Warsaw Pact alliance was no longer able to keep these governments under control by force — with many of the member states going through momentous changes themselves. The result was the freeing of a nation from an oppressive authoritarian rule — a longing which had been fulfilled after 22 years of waiting.

The coins are produced by the Kremnica Mint on behalf of the National Bank of Slovakia and are designed by Patrik Kovačovský. The obverse features a fragment of famed photographer Laco Bielik’s (1939–1984) photograph entitled “Bare-Chested Man in Front of the Occupier’s Tank,” which was photographed in the Slovak capital city of Bratislava during the invasion. This iconic image is placed in front of the number 50 and the word výročie (anniversary), symbolising the 50th anniversary of the invasion of Czechoslovakia by the Warsaw Pact armed forces. At the top of the coin is the inscription AUGUST 1968.

The reverse design of the coin depicts barriers of barbed wire with the number 68 positioned behind them, representing the year of the period which began oppressive “normalisation,” or the commencement of repressive policies that followed the invasion of Czechoslovakia by armed forces of the Warsaw Pact in August 1968. The Slovak coat of arms appears at the top of the coin. At the bottom is the name of the issuing country SLOVENSKO and the year of issuance 2018, along with the coin’s denomination and currency 10 EURO, separated by a horizontal line. To the left of Slovakia’s coat of arms is the mintmark of the Kremnica Mint (Mincovňa Kremnica), and to the right are the stylised letters PK, the initials of the coin’s designer.

Both versions of these new collector coins are individually encapsulated and presented in custom branded Kremnica Mint cases and are accompanied by a certificate of authenticity from the National Bank of Slovakia. For additional information about this coin and others issued by the National Bank of Slovakia, please visit the website of the Kremnica Mint.

For additional information about the photograph which was seen around the world and told an extraordinary story of the bravery of a nation in the face of unparalleled force (as well as a background of the photographer), please click here.

Sale of the postage stamp, which shares the same design as the new commemorative coin, can be purchased from the Philatelic division of the Slovak Post on the 21st August here.

The Prague Spring of 1968: Catalyst to the Fall of the Iron Curtain

Prague Spring of 1968 poster by the Young Union. Image by CDU.

The decade of the 1960s represented a profound change for many countries in terms of social, political, and economic shifts — and in this regard — even some countries behind the Iron Curtain wished to see a meaningful change by the people imprisoned by harsh Soviet-style communism. Many Czechoslovaks read about the protests in Paris from university students protesting against consumerism, war, and the traditional values which the young were openly questioning. These Paris riots resulted in some of the most paralysing general strikes France had ever experienced, and while these protests were in full swing, students in Quebec were watching the events carefully. The first strikes occurred in Montreal in support of independence from Ottawa and greater funding for higher learning. In the United States, massive protests were organised after the shooting of Martin Luther King. With this backdrop, a protest which sprung up spontaneously supported a greater political freedom from Moscow and more non-aligned policies from the government. It was at this time when Czechoslovakia saw the emergence of a society-wide movement for democratisation of the communist regime.

At the same time, the Soviet leadership was closely monitoring these developments with increasing concern since the leaders of the Warsaw Pact alliance did not wish to see a reprisal of the events that had occurred in Budapest in 1956. During this time, Hungarians had attempted to extricate themselves from Soviet domination, and this eventually became a nationwide revolt against the Marxist-Leninist government of the Hungarian People’s Republic and its Soviet-imposed policies. The revolt failed after the loss of life of many Hungarians and lead to a harsh crackdown from Moscow, which meant soldiers from the USSR and other Warsaw Pact countries entering Hungary.

On the 5th January, after the election of reformist Alexander Dubček (1921-1992) to the position of First Secretary of the Communist Party of Czechoslovakia until the beginning of August 1968, many in Czechoslovakia were beginning to think of a new chapter in their country’s history free from imposed communism. The popular policy of Dubček was to grant additional rights to the citizens of Czechoslovakia, which included partial decentralization of the economy and democratization of the political system. Freedoms granted included a loosening of restrictions on the media, speech, and even a lifting on the restrictions of travel. There were real hopes that the nation could return to democracy and multi-party politics, leaving communism behind. At the same time, Czechoslovakia was also becoming a model for other countries that had their democracy taken from them after the Second World War. Within months, communism was imposed, and in many instances, monarchies were toppled and democratically elected presidents were sent into exile or arrested.

As part of an arrangement where it was believed by the Dubcek government that Moscow might accept the will of the Czechoslovak people — as long as Prague remained loyal to Moscow — their hopes were suddenly dashed when on the night of the 20th August 1968, Warsaw Pact forces banded together and entered Czechoslovakia. The announcements during this time stipulated the aims of the invading forces (which included 300,000 foreign soldiers and more than 6,000 tanks and combat vehicles):

It was the common internationalist duty of all socialist countries to protect and consolidate socialist gains.

The occupying armies quickly seized control of Prague and the Central Committee’s building, taking Dubček and other reformers into Soviet custody. Before they were arrested, Dubček urged the people not to resist militarily, on the grounds that “presenting a military defence would have meant exposing the Czech and Slovak peoples to a senseless bloodbath.” Later in the day, Dubček and many in his government were taken to Moscow on a Soviet military transport aircraft. In Czechoslovakia, calls for Dubcek to be returned home immediately and for the invading forces to also return to their homes was in full force — with many radio stations taking the lead with calls of “Long live freedom, Svoboda, Dubcek.”

As part of the agreement making it possible for the return of the Czechoslovak government, the reformers were forced to accede to Soviet demands which meant signing the Moscow Protocols Agreement, dated the 25th August 1968. The main signatories of the 26 politicians in custody were Czechoslovak President Ludvík Svoboda, First Secretary of the Central Committee of the Communist Party of Czechoslovakia Alexander Dubček, Prime Minister Oldřich Černík, Chairman of the National Assembly Josef Smrkovský and most of the ministers, and the Communist Party leader. The only person present at the negotiations who declined to sign was František Kriegel, a member of the Czechoslovak Communist Party from early on who supported the reforms of Alexander Dubcek — and despite not signing the protocol — he was allowed to return to Prague, but was expelled from the party the following year.

After the return of the government held in Moscow, and the tanks which had entered Czechoslovakia in an effort to quash any hope of deposing the communist rule in the country, Moscow had effectively crushed Dubcek’s Prague Spring. Despite the threat of reprisals from Moscow towards their Warsaw Pact alliance members, there was condemnation from the Romanian leader. Albania also withdrew their forces from the Warsaw Pact and at the same time described the invasion as an act of “social imperialism.” The invasion of Czechoslovakia shocked the world and triggered spontaneous civic resistance movements that made headlines at home and abroad. As a result, many Czechoslovakians learned over time that they were not alone and that there was tacit support for their movement.

Alexander Dubček was kept under very close surveillance for much of his life after his return to Prague and was forced to resign as First Secretary in April 1969. He was however re-elected to the Federal Assembly — formerly the Federal Parliament — and became its chairman. In 1970, Dubcek was expelled from the Communist Party altogether and lost his seat in the Slovak parliament, which he had held continuously since 1964, as well as the Federal Assembly. Dubcek lived to see the end of imposed communism in his country after the collapse of the Soviet Union in 1991, and at the same time, he witnessed the peaceful discussions to negotiate the separation of Czechoslovakia into two parliamentary republics. He died on the 7th November 1992, as a result of injuries sustained in a car crash that took place on the 1st September, and was buried in Slávičie údolie Cemetery in Bratislava. The Czech Republic and Slovakia formally separated on the 1st January 1993. Over time, both the Czech Republic and the Slovak Republic integrated into the many Western European and international institutions such as NATO and the European Union — both events occurring in 2004. Both countries are also observing their centenary anniversary of independence this year, which was achieved in 1918 after the signing of the Treaty of Versailles — which ended the Great War.