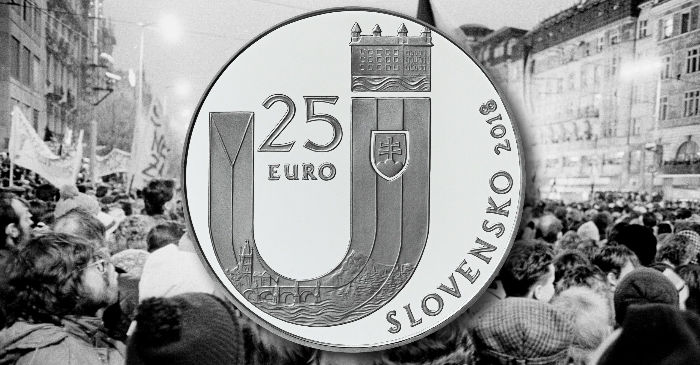 The National Bank of Slovakia have issued (3rd January) a new silver collector coin in celebration of the 25th anniversary of the establishment of the Slovak Republic, which emerged after the separation of the Czech and Slovak Republics as a single entity on the 1st January 1993.

The process by which the Slovaks became a modern European nation culminated on this day 25 years ago with the establishment of an independent state — the Slovak Republic. The Slovak people had finally achieved national emancipation, but the struggle had begun in earnest from the activities of the ‘Štúr’ generation, named after Ľudovít Velislav Štúr (1815-1856), who was the leader of the Slovak national revival in the 19th century. The Slovak people’s efforts continued with the memorandum movement of 1861, through the political activities of Slovak representatives in multi-national Hungary, and with Slovaks’ political and cultural contributions to Czechoslovakia after its establishment in 1918.

The end of communist rule in November 1989 opened the way for negotiations to establish a working federal state to replace what had originally been only a nominal federal state. With no agreement in sight, even after parliamentary elections in 1992, preparations began for dissolving the Czech and Slovak Federative Republic (established on the 23rd April 1990) into two separate states — notwithstanding opposition from significant sections of the public in both the Slovak and Czech parts. On the 17th July 1992, the Slovak National Council adopted the Declaration on the Sovereignty of the Slovak Republic and on the 1st September 1992, it adopted the Constitution of the Slovak Republic. The two states, which had been part of Czechoslovakia since 1918, were to be officially separated on the 1st January 1993 after the federal assembly passed the Constitution Act on the 13th November 1992. The Constitution Act 542 was passed on the 25th November 1992, which finally agreed to the dissolution of Czechoslovakia as of the 31st December 1992. From the 1st January 1993, the two countries were separate nations for the first time since they emerged from the dissolution of the Austro-Hungarian Empire in 1918.

The silver collector coin is struck by the Kremnica Mint on behalf of the National Bank of Slovakia and is designed by Roman Lugár. The obverse side of the coin depicts the previous Czechoslovak flag transforming into the Slovak flag in a U-shape composition, symbolising the establishment of the Slovak Republic. Above the Slovak flag is an image of Bratislava castle. Two symbols of Czechoslovakia are depicted in the lower part of the design, linking the ends of the two flags: Charles Bridge in Prague and Kriváň Peak in Slovakia’s High Tatra Mountains. The coin’s denomination of 25 EURO appears in two lines between the vertical flags. At the lower right side in a semi-circle is the text SLOVENSKO and the year of issuance, 2018.

The reverse design symbolises Slovakia’s entry into the European Union by showing a stylised portal arching over both a map of Slovakia and a euro symbol surrounded by EU stars, some of which are covered by the map. From the left edge to the bottom in a semi-circle is the commemorative inscription 25 ROKOV SLOVENSKEJ REPUBLIKY (25 Years of The Slovak Republic). The date of the country’s establishment is represented by the text 1. 1. 1993 and appears below the map of Slovakia. Above the date is the mint mark of the Kremnica Mint (Mincovňa Kremnica), consisting of the initials “MK” and the stylised letters “PK,” the initials of the coin’s designer, Pavel Károly.

The coin is available in both Brilliant Uncirculated and Proof quality since the 3rd January from various national and international distributors. For a complete list, please visit the website of the National Bank of Slovakia. A two-euro circulation type coin marking the same anniversary is also available since the 3rd January. The design is similar to the reverse side of the silver collector coin. The bi-metallic coin’s outer ring depicts the 12 stars of the European flag.

*A total of one million coins will be minted — of which 3,500 coins in Proof quality are to be issued solely for presentation purposes by the National Bank of Slovakia.