The National Bank of Slovakia has issued a new coin that marks the 450th anniversary of the birth of noted scientist and physician Ján Jessenius (1566–1621). One of the pioneering scientists of the late 16th and early 17th centuries, Jessenius was the author of numerous innovative works in the field of medicine and is widely regarded to be one of the founders of anatomy. To this day, his publications are still considered an extraordinary contribution and undertaking for his era.

The coin is struck by the Kremnica Mint on behalf of the National Bank. The obverse of the coin, which is the artistic work of Mária Poldaufová, depicts a dramatic rendering of Jessenius performing the first public autopsy in Prague in 1600, with a silhouette of the Church of Our Lady Before Týn in the background. In the upper field is the coat of arms of the Slovak Republic. To the right is the country name, SLOVENSKO. Below the coat of arms is the denomination 10 / EURO in two lines. At the bottom edge is the year of issue, 2016. To the lower left is the mintmark of the Kremnica Mint, MK, and the stylized letters MP, representing the initials of the designer.

The reverse of the coin shows a portrait of Ján Jessenius. His name is to the right of the portrait, and to the left, in two rows, are the dates of his birth and death, 1566 / 1627.

The coin is available in both Brilliant Uncirculated and Proof versions, directly from the Kremnica Mint. For more information on this and other coins issued from the National Bank of Slovakia, please visit the website of the Kremnica Mint.

An Anatomist, Physician, Scholar, and Radical

Ján Jessenius was born in Breslau (present-day Wroclaw) into an old, noble family, the House of Jeszenszky, who originated from the Kingdom of Hungary. He exceled in his studies from an early age, when he was enrolled at the Elisabeth gymnasium. From 1583 Jessenius studied at the historic University of Wittenberg in Saxony, and from 1585 he was enrolled at the University of Leipzig. In 1588, Jessenius then traveled to Italy for further studies and attended the University of Padua, receiving a doctorate in medicine in 1591 for his work De Putrescentis Bilis in Febre Tertiana Exquisita Intermittente Loco (On the Locus of Putrefying Bile in Acquired Malaria Tertiana). Soon after, he earned a doctorate in philosophy for his treatise Provindiciis Contra Tyrannos (For the Defence Against Tyrants). Perhaps this thesis was an insight into the political beliefs and policies that would emerge later in his life. He returned to Germany in 1593 and was soon appointed the personal physician to the prince of Saxony as well as becoming a professor at his alma mater in Wittenburg. 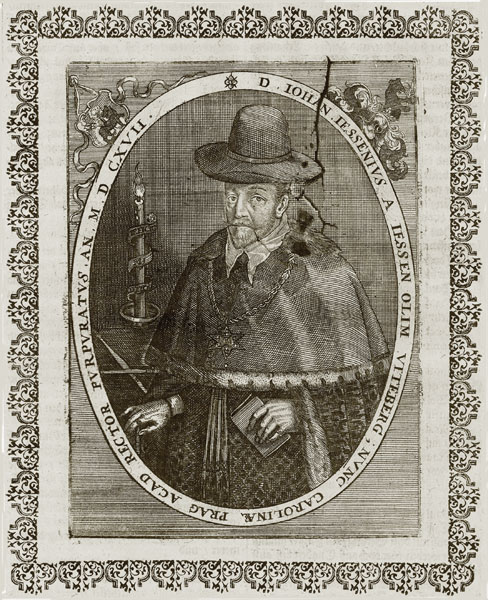 As early as 1600, having relocated to the city of Prague, he performed the first public autopsy, which he reported on in his publications and lectures. His anatomy lessons were famous and considered very progressive. Jessenius became the rector of Charles University in Prague, and during this time, he authored significant works on the science of bones, blood, and surgery, but he also wrote and published philosophical, historical, and religious works.

Being a Protestant, Jessenius took strong views on the defense of his religion and this brought him into direct conflict with Emperor Rudolf II. He resigned from his post as the emperor‘s personal physician and traveled to Vienna to work for the emperor’s brother Matthias II, King of Hungary, with whom he had severed relations with after Rudolf’s election as emperor in 1612. In 1617 Jessenius became rector of Charles University in Prague; at the same time, his political engagement in favor of the Bohemian estates grew into direct opposition to Catholic imperial centralism. When a full uprising of the estates broke out, he became one of its leading personalities. In 1618 he traveled with a diplomatic mission to Hungary to lobby the Hungarian estates not to elect Ferdinand of Habsburg as their king, and was arrested and imprisoned in Bratislava and Vienna. After his release, his political writings grew increasingly radical, though his last years were mostly dedicated to university work.

Events took a turn for the worse in 1621, after the uprising of the Bohemian estates, suppressed at the Battle of White Mountain, was followed by cruel reprisals. Jessenius was accused of rebellion and insulting the crown, for which he was sentenced to death. Despite his immense standing in the medical and academic communities, he was executed along with another 26 Bohemian nobles in the Old Town Square in Prague on June 21, 1621. After his execution, many of his valuable literary medical works and dissertations were summarily destroyed in the Czech lands. The works attributed to him were preserved mainly in the German university libraries, with some works being preserved in Slovakia. In 1962 The Ján Jessenius Medical College in the city of Martin, Slovak Republic, was named in his honor.  ❑