The National Bank of Slovakia has issued (18th May) a new coin which remembers the important contributions of  Jozef Karol Hell (1713 – 1789) whose inventions and discoveries were instrumental in the further development of the mining industry of the Banská Štiavnica region of present-day Slovakia.

Both father Matej Kornel Hell and son Jozef Karol Hell specialized in building and repairing reservoirs and in the supply of energy for mining equipment. What Josef Karol is most famous for however, is the invention of pumps that were far more powerful and consumed much less water than those previously used. Mining conditions were significantly improved by Hell’s beam pumps, column pumps and air pumps. After becoming established features of the mines around Banská Štiavnica, this equipment gradually came to be adopted in other European countries. Apart from pumps, Hell also produced fire sprinklers and ore grinding machines. He became one of the most renowned designers of these machines and, in his position as chief engineer, he ensured that the mining equipment used in the Banská Štiavnica area was among the most advanced in Europe in the 18th century. 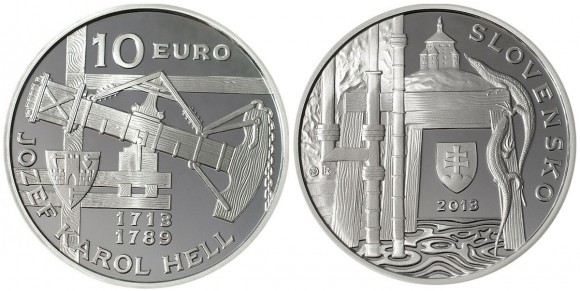 The coin, struck at the Kremnica Mint on behalf of the National Bank, is designed by Roman Lugár. The obverse side depicts the New Castle, which is the dominant landmark of Banská Štiavnica and was one of the workplaces of Jozef Karol Hell. Below the Castle is a mining scene with wooden mine props, pumping pipes, and two lizards, (relating to a legend about the discovery of gold and silver in the Banská Štiavnica area and the start of mining there). In the centre is the coat of arms of the Slovak Republic and below, the year 2013. The country name SLOVENSKO appears along the right edge of the design. The mintmark of the Kremnica, (MK) and the stylised initials of Roman Lugár, RL, are placed next to the left edge.

The reverse side includes the beam of a column pump along with the older coat of arms of Banská Štiavnica. In the upper part is the denomination 10 EURO and along the lower edge is the text JOZEF KAROL HELL. Above that in two rows, are the dates of Hell’s birth and death 1713 and 1789.

For more information on this and other coins produced for the National Bank, please visit the website of the Kremnica Mint at: http://www.mint.sk/ Information offered in German, English and Slovak – International orders fulfilled.