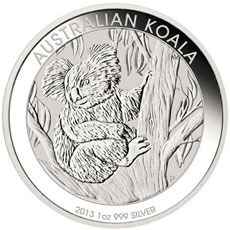 The Perth Mint of Australia has released the latest monthly sales figures for gold and silver sold as coins and minted products. While gold sales dipped from the prior month, silver sales increased likely due to the release of the 2013 Australian Koala silver bullion coins.

For the month of November 2012, sales of gold coins and minted products reached 47,850.77 troy ounces, down 11.78% from the prior month. Over the past few months, sales had been higher than usual, driven by the release of the Australian Lunar Series Year of the Snake Coins in September and the Australian Kangaroo gold coins in October.

With no new gold bullion coins released during November, a retreat in sales might have been expected. Sales were still relatively high when compared to earlier months of the year.

For November, sales of silver coins and minted products reached 620,238.26 troy ounces. This represented an increase of 35.51% from the previous month. The rise can be attributed to the release of the 2013-dated Australian Koala silver bullion coins on November 5, 2012. Featuring a new design of a koala sitting in the fork of a tree, the 99.9% silver coins are available in 1/2 oz, 1 oz, 10 oz, and 1 kilo sizes with no maximum mintage established.