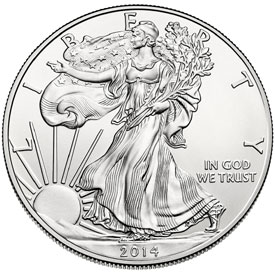 Effective Monday, June 2, 2014, the United States Mint’s American Silver Eagle bullion coins will no longer be subject to allocation. For the first time in more than sixteen months, authorized purchasers will be able to order the coins without limitations.

In times when demand for bullion coins has exceeded the available supply, the Mint has used an allocation program to ration available coins amongst their authorized purchasers. Allocation was used for the first time in 2008 when a surge in demand for physical precious metals exhausted the Mint’s supplies of gold and silver bullion coins. After brief suspensions, sales would be resumed on an allocated basis. Allocation was commonplace throughout 2009 and 2010 as production continued to fall short of market demand. After a few years of improved availability, the US Mint would once again resort to allocation in the face of increased demand.

In January 2013, strong demand for Silver Eagle bullion coins resulted in a temporary sell out, after which sales were resumed on an allocated basis. The 2013-dated coins continued to be rationed until the final allocation occurred on December 9, 2013.

Sales of 2014-dated Silver Eagle bullion coins would begin on January 13, 2014, and once again the coins were subject to allocation. When allocation is finally lifted next week, this will mark more than sixteen months during which the coins were either subject to rationing or otherwise not available.

Despite the restraints on availability, year to date Silver Eagle sales have reached 21,436,500 ounces according to the latest data available on the Mint’s website. The current sales level and the removal of allocation create the possibility for another annual sales record. During 2013, the Mint had sold a record high 42,675,000 ounces.