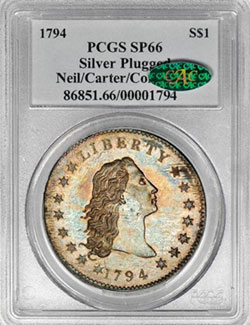 On January 24th Stack’s Bowers offered the PCGS SP66 1794 Flowing Hair Dollar in their auction of the Cardinal collection. This coin has been prominently featured in the numismatic community for decades, tracing its pedigree back to the famed Virgil Brand Collection from the late 19th century and owned by some of the most prominent American numismatists of the 20th century. The coin had last been sold via private treaty, when Steve Contursi sold it to the Cardinal Collection Education Foundation for a record-breaking $7,850,000. This was reportedly the largest sum ever paid for a single coin, with the highest public auction record held by the 1933 Double Eagle that sold for $7,590,020 in 2002 at a Sotheby’s auction.

That auction record stood for over ten years but has now been passed by the Stack’s Bowers auction of the 1794 SP66 Dollar. The hammer price was an amazing $8,525,000, with a buyer’s premium of 17.5% added, making the total sale price $10,016,875. Not only is this a new record, this is also the first time that any coin has reached a sales price of over $10 million. Within 30 minutes of the sale Legend Numismatics of Lincroft, NJ sent an email announcing their purchase of the coin at the auction, indicating that they have “no plans to sell this coin in the near future.”

Much has been written about the fabled 1794 silver dollars and most numismatists will be familiar with their story. The issue had an extremely limited mintage of 1,758 pieces, all struck on a hand-operated screw press (a press that was initially built for smaller coins, making it very difficult to strike larger coins with full details), and from a single pair of dies. From this limited mintage it is estimated that approximately 130 to 140 have survived to the present day, mostly in well-circulated and/or damaged condition. Uncirculated examples are prime numismatic rarities (only six are universally accepted as uncirculated coins), with sales of such examples occurring extremely infrequently. 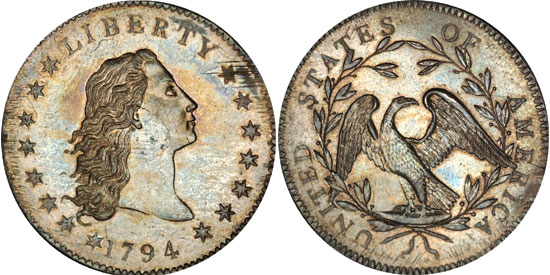 Martin Logies, the owner of the Cardinal Collection, has devoted a great deal of research to the 1794 Silver Dollars, publishing a book identifying all known examples (a total of 134 pieces). This book, The Flowing Hair Silver Dollars of 1794: An Historical and Population Census Study was published in 2010 and identifies a total of five different die states for the single pair of dies that produced all 1794 Flowing Hair Dollars. Die State I shows absolutely no die clashes, with all later die states showing varying degrees of die clashes and die lapping to remove those clashes that must have occurred while the production was in full swing.

Only two coins are known from Die State I: A unique copper striking preserved in the Smithsonian Institution (Judd-19) that is believed to have been used to set up the coin press prior to minting, and the coin offered in the Stack’s Bowers auction. This has made many numismatists agree that the coin certified by PCGS is the best candidate for being the first ever silver dollar struck in the United States of America. When compared to any of the other known examples this argument is not difficult to make; the fields are semi-prooflike and the strike is extremely strong, lacking the common weakness that is found on several areas of the design. Without a doubt the coin was produced with special care and also carefully treated after that for it is in the finest state of preservation one could expect for a coin from the late 18th century.

Very few single items have ever been sold in excess of ten million dollars and this sale will no doubt generate a lot of attention to the numismatic community. It might be many years before this coin will come up again for sale and until it does it will be very difficult for any coin to break the record that was set on January 24th. Prices of coins such as this 1794 Silver Dollar as well as more available numismatic items have been steadily increasing over the last decades and this auction shows that numismatists is still a much enjoyed hobby with a bright future.