The Bank of Estonia have issued a new collector’s coin to mark the 150th anniversary of birth of one of the country’s most influential composers, choir leaders, and musicians, Miina Harma (1864 – 1941). Harma is credited with great contributions to the Estonian song festival – one of the largest amateur choral events in the world which is held every five years in July on the Tallinn Song Festival Grounds.

Harma was born as Miina Hermann in the town of Kõrveküla, (formerly in the Russian governate of Livonia) now in Tartu County, southern Estonia to a local teacher and his wife who were both musically educated and inclined. Härma began to teach herself music with a small organ her father bought her and at 15, she began studying with K. A. Hermann, who gave her lessons in both musical composition and piano. In 1883, Härma entered the Saint Petersburg Conservatory as its only organ student that year. Graduating in 1890, she continued to live in Saint Petersburg as it was very hard to find work in in the field of music in the Baltic governorates. In 1894, the fifth Estonian Song Festival took place, which led Harma to form her own choir. During her 60 year period of musical activity, Harma wrote more than 200 choral songs, 10 cavatinas or short song of simple character, a canto entitled “Kalev and Linda” based on the Estonian mythological epic and much more. Most of her works were forms of vocal music, rather than instrumentals. Harma is also fondly remembered for taking organ music to the countryside, as virtually no skilled organists gave concerts outside of towns. Härma eventually became a music teacher in the school that now bears her name, Miina Härma Gymnasium. She died on the 16th November 1941, in Tartu and is buried in the city’s Raadi Cemetery. 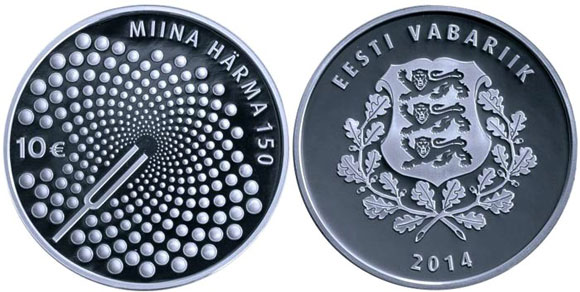 The coin, struck by the Royal Dutch Mint on behalf of the Bank of Estonia is designed by Jaano Ester who has designed previous Estonian collector coins such as the gold coin issued in 2008 marking the 90th anniversary of Estonian independence. The obverse includes a contemporary design which depicts pure tonal vibrations resonating from a tuning fork – a symbol of Harma as the music teacher, conductor and composer. The text “Miina Härma 150”, and the coin’s face value of “10 €” is incorporated in the primary design. The reverse bears the national coat of arms of the Republic of Estonia and the year 2014.

The coin is available directly from the Bank of Estonia’s Museum shop or from Estonian Post’s own web-shop. For more information from either source, please visit their websites at: