The National Bank of Poland has issued a new silver coin to mark the 30th anniversary of the founding of the Solidarity movement. Solidarity was Poland’s first (as well as the first in any Warsaw pact country) non-communist party controlled trade union, which was established in the shipyards of Gdansk. 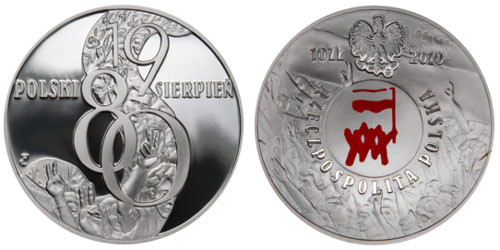 The obverse of the silver coin shows an image of a crowd formed in the shape of the letter “S” with raised hands as a sign of victory. The stylized date of 1980 appears over the crowd. On either side of the primary design is the inscription “POLISH SIEPRIEŃ”.

Each coin is struck in .925 silver with a diameter of 32 millimeters and weight of 14.1 grams. Coins are proof quality with a mintage limit of 50,000 pieces.