The Norges Bank have issued (21st February) a new silver coin to mark the birthdays of Both King Harald V and Queen Sonja who both turn 75 this year. His Majesty King Harald V celebrated his birthday on the 21st February, the coin’s date of issue, while the Queen will celebrate this milestone birthday on the 4th July. It is the first time that Queen Sonja has been portrayed on a legal tender coin and also the first time that any royal consort has been depicted on Norwegian coins in their modern history.

The Royal couple ascended to the Norwegian throne on the 17th January 1991 on the death of King Olav V and their investiture took place on the 23rd June in Nidaros Cathedral of the same year. King Harald V and Queen Sojna have been married since the 29th August 1968, their two children are Princess Martha Louise and Crown Prince Haakon. 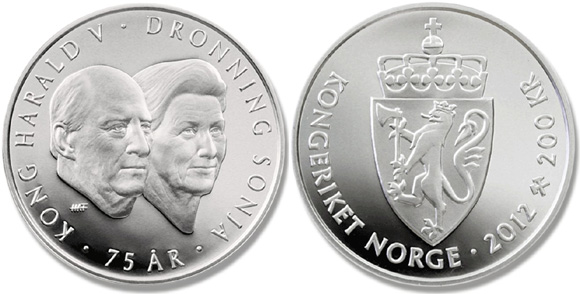 The silver coin which has a denomination of 200 Kronor is struck at Det Norske Myntverket (Mint of Norway). The obverse of the coin is designed by the sculptor Håkon Anton Fagerås and includes a conjoined double portrait of both the King and Queen facing towards the right along with the text “KONG HARALD V ∙ DRONNING SONJA” along the top portion above the portraits. Below is the text “75 ÅR” (75 years) The reverse is designed by Ingrid Austlid Rise, engraver at the Mint, and depicts the national coat of arms which includes a crowned shield in the center with the text “KONGERIKET NORGE” along with the year of issue “2012” and coin’s face value in numerals.

Struck in sterling silver to proof quality, the coin has a weight of 16.8 grams and a diameter of 34 mm. A total mintage of 40,000 pieces has been authorized.

The Norges Bank have announced that any profits from the sale of this commemorative coin will be used for the benefit of the general public. Two charities that will each receive 50% of the profits are The Crown Prince and Crown Princess’ Humanitarian Fund and Princess Märtha Louise’s Fund.

For more information on this and other coins issued by the Norges Bank or, to order their latest coin and mint sets, please visit their on-line shop at: http://shop.norges-bank.no/default.aspx All information is available in English and Norwegian.