The Finance Ministry of Japan have authorized the issue of a new coin to mark the 50th anniversary of the country’s Shinkansen, or new trunk line of high speed trains which began service in 1964. Often referred to as the “bullet train” due to its shape, the Shinkansen catapulted public transport into the modern age and at a ground speed not before experienced. The Tōkaidō Shinkansen began service on the 1st October 1964, just in time for the Tokyo Olympics. The conventional Limited Express service took six hours and 40 minutes from Tokyo to Osaka, but the Shinkansen made the trip in just four hours, and then shortened to three hours and ten minutes by 1965. It enabled day trips between Tokyo and Osaka, the two largest metropolises in Japan.

With its speed of between 240–320 km/h or 150–200 mph, Shinkansen uses advanced technologies compared with conventional rail, and it achieved not only high speed but also a high standard of safety and comfort. Its success has influenced other railways in the world and the importance and advantage of high-speed rail has consequently been re-evaluated in many countries who have either adopted some elements of high-speed service or who are planning their rail service to incorporate the technology fully. The Shinkansen uses 1,435 mm (4 ft 81⁄2 in) standard gauge in contrast to the 1,067 mm (3 ft 6 in) narrow gauge of older lines. Continuous welded rail and Swingnose crossing points are employed, eliminating gaps at turnouts and crossings. Long rails are used, joined by expansion joints to minimize gauge fluctuation due to thermal elongation and shrinkage. A combination of ballasted and slab track are used, with slab track exclusively employed on concrete bed sections such as viaducts and tunnels. Slab track is significantly more cost-effective in tunnel sections, since the lower track height reduces the cross-sectional area of the tunnel, thereby reducing construction costs by up to 30%. However, the smaller diameter of Shinkansen tunnels compared to some other high-speed lines has resulted in the issue of “tunnel boom” becoming a concern for residents living close to tunnel portals. 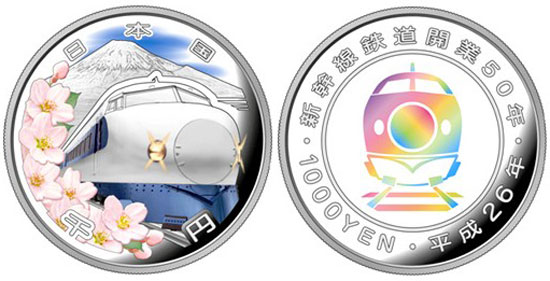 The coin, which includes full color images of the original “0 Series” shinkansen with Mt. Fuji covered with snow in the background and cherry blossoms placed to the left side. The reverse includes a stylized representation of the Bullet train along with the commemorative text highlighting the 50th anniversary as well as the regnal name of Japan’s Emperor Heisei & his 27th year as Japanese head of state and the coin’s denomination of “1000 YEN”

Finance Minister Taro Aso described the Shinkansen as “an important social infrastructure supporting people’s lives and economic activities” during the press conference which outlined national celebrations and launched the coins. Japan plans national celebrations to commemorate the 50th anniversary of its launch on October 1st 2014. A second coin with a face value of 100 yen will also be issued as part of the national celebrations later in the year.