The Bank of Latvia have announced (9th November) a new collector’s silver coin dedicated to one of the country’s most well-known and respected sculptors who made a significant contribution to the artistic freedom of the Baltic country during the early years of independence. Kārlis Zāle (1888-1942) was the flag-bearer of the national awakening and immortalized national identity with two important contributions which are honored to this day all over the country and have attained the status of national treasures. 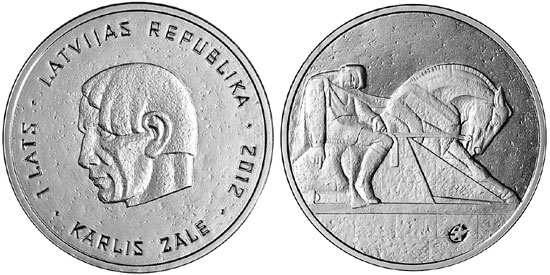 The Freedom Monument which is situated in the center of Riga on Brīvības bulvāris (Freedom Boulevard) near the old town of Riga is a focal point of the capital & country since it’s unveiling on the 18th November 1935 and has endured throughout Soviet occupation – re-emerging once again as the symbol of independence when Latvia re-established this status on the 21st August 1991. The Brother’s Cemetery, dedicated to the fallen soldiers who fought in the First World War and later, during Latvia’s first war of Independence (1918 – 1920) is also a focal point of national solidarity. Established in 1915, The cemetery which consists of an area of 9 hectares in north-eastern Riga was set aside after consideration by the Riga City Council to plan for burial grounds, which could later form a separate cemetery for soldiers originally killed in action during World War I.

Zāle was commissioned with the most complicated task which was to express, by sculptural means, the oath and dedication of the Latvian soldier “to sacrifice himself in the struggle for the freedom of his homeland” and to “lend the quality of an epos to the drama of the soldiers fallen in World War I and armed struggles for Latvia’s statehood.” The monument entitled “The Dying Horsemen” consists of a sculptural group representing a pair of dying ancient Latvian horsemen. The riders and horses in the first group have straight stances with one of the horses depicted with its head thrown back. This is in contrast to the second group, which is dominated by downward movement as expressed through the bowed heads of the riders and horses (featured on this coin’s reverse design). The memorial ensemble of the Brethren Cemetery was unveiled with a solemn dedication on the 11th November 1936. Testament to the brilliance of Karlis Zale is that his own resting place is in the Brethern Cemetery itself.

The coin, which is struck by the Royal Dutch Mint and designed by graphic artist Krišs Salmanis features a roughly frosted and of stony texture in appearance. Its central field features Zāle’s portrait, taken from the sculptural group “Work” of the Freedom Monument and is encircled by the inscriptions “KĀRLIS ZĀLE, 1 LATS, LATVIJAS REPUBLIKA” along with the year of issue “2012” separated by rhombic dots. The reverse includes a faithful reproduction of the image of the sculpture “the Dying Horseman I”, taken from the memorial ensemble of the Brethren Cemetery. As the coin is issued in conjunction with the EUROPA Silver Star programme, the logo of the “European Silver Programme” is displayed on the right below.

Struck to proof quality in .925 silver, the coin has a weight of 22 grams and a diameter of 35 mm. An incused edge inscription is included which reads “LATVIJAS BANKA, LATVIJAS REPUBLIKA 2012” separated by rhombic dots. The Bank of Latvia have authorized a total of 7000 pieces to be minted.