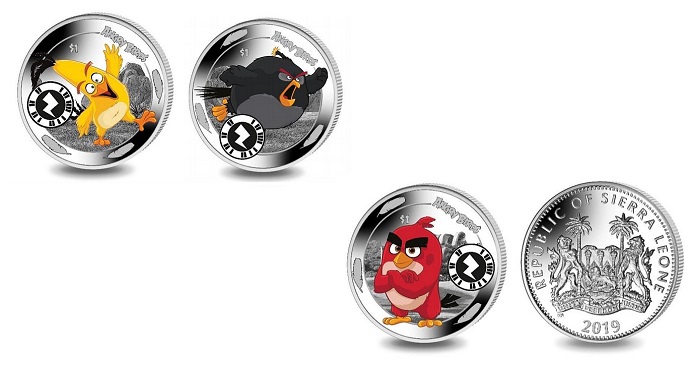 The Bank of Sierra Leone has unveiled (24th July) a three-coin set of crown colour coins featuring the Angry Birds, a free-to-play video game series developed by Chimera Entertainment and published by Rovio Entertainment, which debuted on the 12th March 2014. Angry Birds hatched as a casual mobile game that has blossomed into one of the most beloved entertainment brands in the world, inspiring over a dozen games, billions of consumer products, several animated series, and a hit blockbuster movie. In the centre of the story is the epic battle between the flightless birds and the green pigs.

The first Angry Birds Movie, a computer-animated comedy film, was released in May 2016 and grossed more than $352 million worldwide. The Angry Birds Movie 2 is due to be released on the 2nd August 2019 in the United Kingdom. 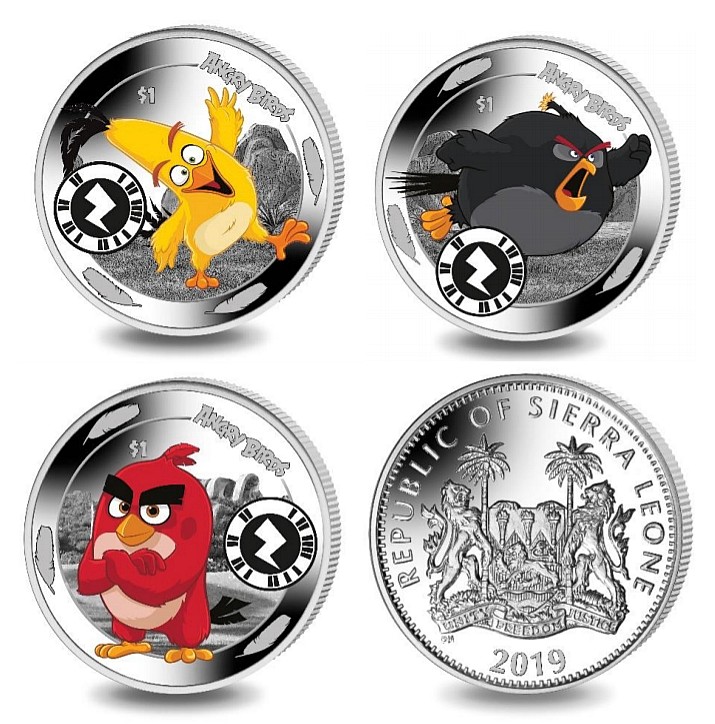 Following on the success of the Angry Birds coins issued in January of this year, the latest coin set is issued on behalf of the Bank of Sierra Leone in conjunction with Rovio Entertainment Corporation. The fantastic new coins, which feature Chuck, Bomb, and Red all include a special code unlocking content in Zappar’s mobile AR companion downloadable application.

The Pobjoy Mint produces the coins at their facilities in Surrey on behalf of the Bank of Sierra Leone. Struck in cupro-nickel, and with a colour design on the reverse, each coin includes the three characters, all telling a story with their pose and showing the landscape of Bird Island in the background. The obverse of the coin features the crest of the Republic of Sierra Leone, which is centred in the middle of the coin with the text REPUBLIC OF SIERRA LEONE placed above the crest. The year of issue, 2019, is shown beneath the crest.

The colour-design cupro-nickel coins are presented in a bespoke colour pack. Pre-issue date orders can be placed starting today for delivery commencing on the 29th July. For additional information about this coin and others issued by the Bank of Sierra Leone, please visit the website of the Pobjoy Mint.