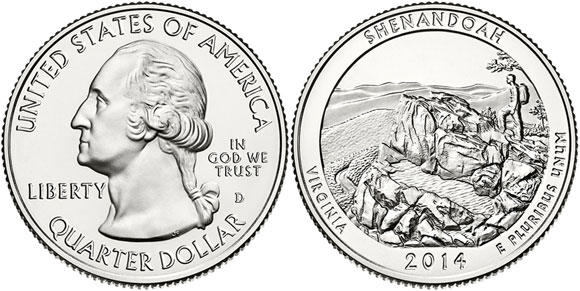 The Shenandoah Quarter represents the second release of the year and the twenty-second release overall for the America the Beautiful Quarters Program. The program launched in 2010 and is scheduled to continue until at least 2021, with rotating reverse designs featuring a national park or site from each of the 50 states, 5 territories, and the District of Columbia.

The reverse design of the latest release features a depiction of a day hiker taking in the view from Little Stony Man summit. This was designed and engraved by Phebe Hemphill. Inscriptions read “Shenandoah”, “Virginia”, “2014”, and “E Pluribus Unum”.

The obverse design contains a portrait of George Washington restored from the original 1932 portrait created by John Flanagan. Inscriptions read “United States of America”, “Liberty”, “In God We Trust”,  and “Quarter Dollar”.