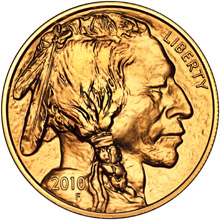 As gold and silver prices have soared, demand for the United States Mint precious metal bullion coins has fallen from the peaks reached earlier in the year. During September 2010, sales of the American Silver Eagle fell to their lowest monthly level of the year. Sales of the American Gold Eagle more than doubled from the prior month, but remain below the monthly average for this year.

American Silver Eagle sales measured 1,880,000 ounces for the month. Until now, the lowest monthly sales total for this year had been February when 2,050,000 of the one ounce coins were sold. Last year, the lowest monthly sales for the year had also occurred in September, so the recent decline may be related to seasonal factors. Through the end of September, the US Mint has now recorded sales of the 25,480,500 Silver Eagle bullion coins.

The recent lull in sales did have some consequences. The US Mint ended Silver Eagle rationing at the beginning of the month. Previously, authorized purchasers had been restricted in the number of silver bullion coins that could be ordered. The Mint also announced the availability of the 2010 Proof Silver Eagle in late November. This collector product had been canceled in the previous year.

Sales of American Gold Eagle bullion coins rebounded from the low levels experienced in the prior month. Cumulative sales of 88,000 ounces were recorded, primarily via the one ounce coins. The available one-half, one-quarter, and one-tenth ounce fractional coins contributed a new 5,500 towards the total.

The US Mint concluded sales of 2010-dated Gold Buffalo bullion coins during the month. The sell out was announced via memo to authorized purchasers distributed on September 27, 2010. During the month, sales of 10,000 of the one ounce 24 karat gold coins had been recorded. The annual total sales were 209,000.