On October 28, 2009, President Obama presented former Senator Edward William Brooke III with the Congressional Gold Medal for his unprecedented and enduring service to the Nation. 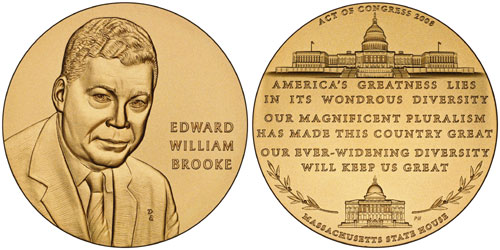 The Gold Medal honors Senator Brooke’s pioneering accomplishments in public service. He broke new ground at a time when few African-Americans held state or Federal office. He was the first African-American elected to the U.S. Senate by popular vote, serving with distinction for two terms, from January 3, 1967 to January 3, 1979. During his first term, Brooke was appointed to the President’s Commission on Civil Disorders, where his work on discrimination in housing served as the basis for the 1968 Civil Rights Act.

The Congressional Gold Medal was designed and struck by the United States Mint. The obverse of the medal features an image of the Senator with the inscription “Edward William Brooke.” The obverse was designed and sculpted by Don Everhart. The reverse of the medal depicts the U.S. Capitol Building and the Massachusetts State House between olive branches. Central inscriptions read “America’s greatness lies in its wondrous diversity / Our magnificent pluralism has made this country great \ Our ever-widening diversity will keep us great”. Additional inscriptions include “Act of Congress 2008” and “Massachusetts State House”. The reverse was designed and sculpted by Phebe Hemphill.

The United States Mint will also strike and issue 3 inch and 1-1/2 inch bronze reproductions of the medal. A sale date for the medal has not yet been determined.