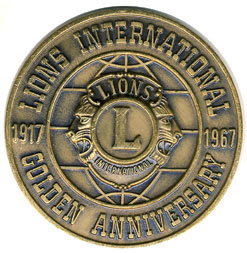 On July 26, 2012, the Senate passed S. 1299 Lions Clubs International Century of Service Commemorative Coin Act. The bill seeks to require the Secretary of the Treasury to mint and issue up to 400,000 silver dollars in commemoration of the centennial of the founding of the organization.

The Lions Clubs International was founded in 1917 by Melvin Jones. The organization aims to “meet the needs of local communities and the world.” According to their website, there are 1.35 million members across 207 countries and geographic areas.

Initially, the bill H.R. 2139 had been introduced in the House of Representatives seeking to authorize commemorative coins for the Lions Clubs International. This was followed by an identical bill S. 1299 introduced in the Senate on June 29, 2011.

Both bills call for the coins to be issued only during the calendar year beginning January 1, 2017 and for a surcharges of $10 per coin to be added to the sales price. The surcharges would be distributed to the Secretary of the Lions Clubs International Foundation for the purposes of (1) furthering its programs for the blind and visually impaired in the United States and abroad; (2) investing in adaptive technologies for the disabled; and (3) investing in youth and those affected by a major disaster.

For the commemorative coin program to be authorized, one of the bills must be passed in both the Senate and House of Representatives and then signed into law by the President.