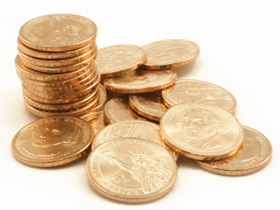 The Treasury Department recently implemented a suspension of production of Presidential Dollars for circulation. The move was announced by Vice President Biden and Treasury Secretary Timothy Geithner as part of the Administration’s Campaign to Cut Waste.

Federal Reserve Banks hold an estimated 1.4 billion dollar coins in surplus, and it was estimated that the amount would have grown to 2 billion if the Presidential Dollars had continued to be produced for circulation through the conclusion of the program in 2016. The Treasury Department indicated that the suspension would yield annual savings of $50 million over the next several years.

The group of Senators who introduced S. 2049 the Currency Optimization, Innovation, and National Savings Act (COINS Act), cited potential longer term savings from phasing out the $1 bill in favor of the $1 coin. Although the coins initially cost more to produce than bills, savings would be generated due the longer lifespan of the coins compared to bills. A recent GAO study was estimated that the savings would be $5.6 billion over 30 years.

A news release from the Senators noted that virtually every modern economy has made a similar transition to higher denomination coins. The release also stated that when the Canadian government switched the the $1 coin, the move generated savings at a rate ten times the initial projections.