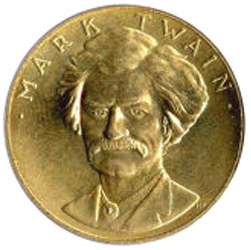 A bill was introduced in the Senate on November 30, 2011 which seeks to require gold and silver coins to be minted in commemoration of Mark Twain. This follows a similar bill introduced in the House of Representatives in July.

The current bill S. 1929 Mark Twain Commemorative Coin Act was introduced by Sen. Richard Blumenthal of Connecticut. It describes author Samuel Clemens, who wrote under the name of Mark Twain, as one of the best known Americans in the world whose literary work had a long lasting effect on the history and culture of the United States. More than 6,500 editions of his books have been translated in 75 languages. In the past two decades, more than 100 books have been published and 250 doctoral dissertations written on his life and work.

If approved, the bill would require the Secretary of the Treasury to mint and issue up to 100,000 $5 gold coins and up to 35,000 silver dollars carrying designs emblematic of the life and legacy of Mark Twain. The coins may be issued only during the one year period beginning on January 1, 2016.

The prices of the coins would include surcharges of $35 per gold coin and $10 per silver coin distributable to four beneficiaries:

Mark Twain has been depicted previously on a one ounce gold medallion produced by the United States Mint in 1981 (pictured above). This release was part of the American Arts Gold Medallion series.