The Free Dictionary online defines “sleaze” as a condition of low quality or dirty appearance. Other meanings have to do with dishonesty and ethics.

Let’s focus on “low quality” as a condition of a coin. Let’s discuss ethics, too, and dispense with dishonesty as that is a state of mind, which cannot be easily proved in court.

In addition to being a numismatist, I’m an ethicist with a few published books, including Living Ethics Across Media Platforms (Oxford University Press, 2008). So I feel qualified to speak on the topic.

A practice may be legal and unethical or ethical but illegal. Texting while driving on the highway is legal in many states but unethical, as a person endangers his own and other lives because of driver inattentiveness. Civil disobedience, such as holding a religious ceremony on the steps of a government building, to protest an action, can be ethical but illegal.

Self-slabbing, as the term indicates, involves a person putting his or her own coins in holders and then labeling them with year, mint mark and condition. This happens every day when hobbyists put coins in flips and holders and sell them online, designating condition. But only a relative few people doing that also designate themselves as companies.

Doing so suggests expertise, allowing auctioneers to cite Red Book or PCGS prices for coins barely worth their melt value.

I can’t think of an everyday situation where the practice of self-slabbing would be illegal but ethical.

Let’s deal with legality. It’s perfectly legal for a person to holder a coin and print a label that accurately or inaccurately depicts the condition of a coin. If the person has incorporated under a numismatic name, but doesn’t accept submissions as a grading company and holders only his or her own coins, well, that’s legal, too.

Moreover, it’s the truth. Grading, one may argue, is entirely subjective. And no law states that a coin grading company has to accept submissions from other collectors and offer guarantees on authenticity and condition.

So when a hobbyist spots a self-slabber hyping coins far beyond their intrinsic worth, the hobbyist should know the difference between legal and ethical and all the shades of truth in between.

That said, the zealous hobbyist also has truth on his or her side. Grading may be subjective, but within a given range according to convention. Labeling a coin MS67 when it actually only is VF30 is off by 37 points. The act of designating a grade in itself at best implies a warranty and at worst, a modicum of expertise. Any numismatist can testify to that. More difficult to prove in court is the state of mind of the self-slabber, especially when a third-party is involved, in this case, an auctioneer. 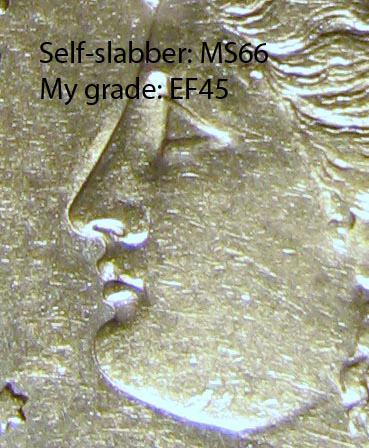 I approached the auctioneer afterward to see if he knew about self-slabbers. “I’m not a coin man,” he said. 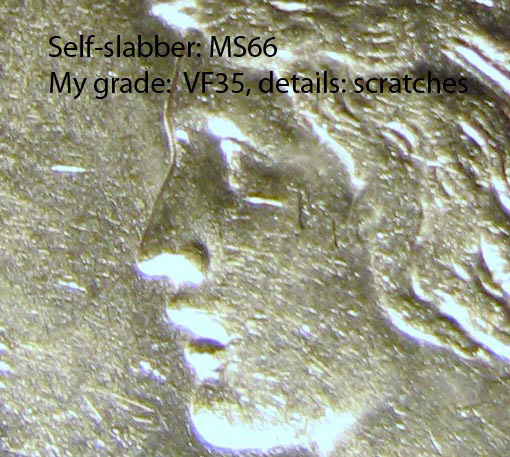 There is no law holding auctioneers to be expert in what they sell, even if they sell coins regularly and should know better. Neither is there a law that holds online auction portals accountable for allowing such trade on their networks.

(I’d argue, however, that it is the portal’s interest to establish baseline rules, such as eBay has.)

You may have noticed that I am not naming the self-slabber in Coingrader Capsule. I am also asking my editor to monitor and not allow comments on Coin Update News and/or under this column that may or may not identify a self-slabbing company.

I know about law, too. As long as I don’t identify the person and this Web site takes reasonable precautions to do the same in the comments, then the burden of proving my own state of mind falls upon the self-slabbers. Worse, they will have to self-disclose who they are in order to threaten me, as is their wont, allowing me to file a counter suit against them in my capacity as a nationally known ethicist and numismatist, in as much as I have reasonable care not to identify a particular person or company.

Also, there is this: You as a Coin Update News viewer are free to research “self-slabber,” a specific numismatic term, via your favorite search engine. I recommend that all online auctioneers do the same and stop pleading ignorance that they know so little about coins, even though their auctions primarily sell coins. If you’re going to sell coins regularly on Internet portals, then you have an ethical obligation to know what you’re doing and whom you are hurting, usually onsite, as those attending an auction in person typically are not as schooled as those purchasing coins online.

In other words, you’re going to have to look the buyer in the eye one day when he or she learns about the actual value of self-slabbed coins.

Good luck with your reputation then.

Finally, grading may be subjective. But in the pix illustrating this column — again note my precautions in not identifying the self-slabber or even the year of the coins — I maintain that any average hobbyist (let alone expert numismatist) would agree that my grades are closer to the truth, which is the best defense, of course, in all matters legal and ethical.