The 25th Anniversary Silver Eagle Set that will be released on October 27 is expected to be by far the hottest U.S. Mint numismatic product of the year.

Like many silver eagle collectors, I have been dreaming of this set since not long after the release of the 20th anniversary set.

Some people feel that meaningful anniversaries must be divisible by ten, but I don’t think it’s the number of years being commemorated that matters to most people.

American Silver eagles are by far the most widely collected modern U.S. Mint coin and the most widely bought and sold bullion coin in the world. It is, in many ways, the successor of the Morgan dollar, although such a statement might be heresy to die-hard Morgan collectors.

Its classic Adolph Weinman-designed obverse and patriotic reverse, coupled with its establishment as the leading modern American coin, have created a large following within the numismatic community.

The five-ounce America the Beautiful (ATB) coins have also elicited substantial interest among collectors of modern U.S. coins in the past two years, but those coins simply lack the track record and widespread appeal of silver eagles. That may help explain why premiums on bullion silver eagles currently run higher than those on the ATB coins.

The fact that this year’s anniversary set will have a mintage of “up to 100,000″ compared to the 250,000 mintage of the 2006 sets plus the fact that it will have five coins, including the first-ever “S” Mint burnished silver eagle, have helped produce a major buzz in coin circles.

From the day the set was first announced, collectors began speculating about the price the set would be offered at. Most seem to be pleased with the Mint’s announcement on October 20 that based on current silver prices the set will be priced at $299.95.

There are some who think that a major drop in silver prices will put a damper of sales of the sets, but I think that is unlikely.

Collectors of silver eagles need this set to keep their collections current, and they are not buying it for silver content. Otherwise, they would put their money in the lowest-cost bullion silver eagles they can find.

In fact, when silver dropped to just a little above $30 on October 20, I considered purchasing a few bullion eagles for $34 each, which is barely above what a dealer will pay for the coins. Then I reminded myself that I have to husband my resources for the upcoming anniversary sets.

Now that the date, price, and household limit of five have been set, the discussion has moved on to expected secondary market values. 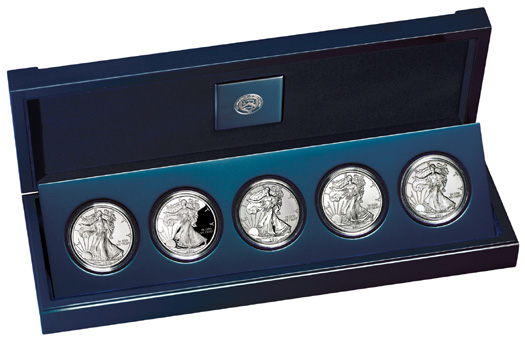 Apparently there are sellers on e-Bay offering the sets for about twice the Mint’s price, and one well-known modern coin dealer who advertises often in the print media has already started taking orders for raw sets as well as graded MS/PF-70 sets at prices that I personally think are unreasonable since no market has yet been established for these sets.

I think some collectors believe that a dealer’s or e-Bay seller’s pre-order price helps determine the future value of a coin, but the reality is that coin values take time to be established, as the process of supply and demand works itself out.

Of course, only time will tell what value the new sets ultimately reach, and like the values of most modern Mint products, those values will not ascend in a straight line.

One factor to keep in mind is that even though dealers will be able to buy five sets and will undoubtedly ask their friends and relatives to order five sets each as well, many larger dealers will be interested in larger quantities of sets.

One reason is because this type of product is always heavily promoted by larger dealers, and that is something that happened with the 2006 sets.

Many 2011 sets will be sent in for third-party grading in hopes of getting MS and PF-70 coins, and many will be broken up for the unique coins in the set: the reverse proof and the burnished “S” coin.

I suspect that the new sets, once they quickly sell-out at the Mint, will sell on the secondary market for approximately twice the original $300 price. But I would not be surprised to see prices reach close to $1,000 in the coming months, as dealers promote the sets to collectors who either were unable to get one from the Mint, who just learned of them, or who want additional sets as an investment.

Over time, as new people start collecting silver eagles, they will also want one for their collections, which should help support future demand.

But as with most modern Mint products, I would suggest caution when it comes to paying several multiples of the original price for these sets.

It is certainly possible that long-term demand will be sufficient to push prices to even higher levels at some point, but it will all depend on whether sets are in the hands of real collectors who plan to keep them for years, or e-Bay flippers and others looking for a quick profit.

A coin or set that sells out at the Mint but which is readily available from coin dealers and e-Bay sellers is not a truly scarce item, and serious buyers eventually discover that, which can cause prices to drop.

But this case could be different because there are so many silver eagle collectors and not just in the U.S. since silver eagles have global demand.

Whatever happens to future values, this will be a great product for collectors of silver eagles.

Louis Golino is a coin collector and numismatic writer. His articles have been published in Coin World, Numismatic News, and other publications. He also writes a regular column called “The Coin Analyst” for www.CoinWeek.com about U.S. and world coins and precious metals and has written widely about international politics for newspapers and web sites.